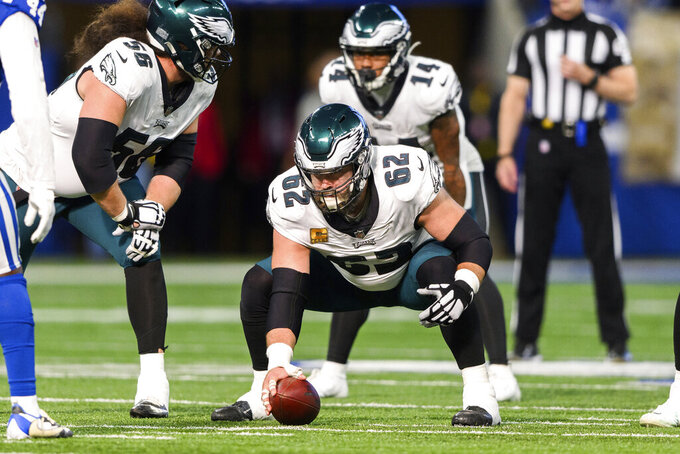 If a unit could win the Most Valuable Player award, the Philadelphia Eagles’ offensive line would be the frontrunner.

Jalen Hurts is among the top candidates for AP NFL MVP mainly due to a dominant line that protects him and paves the way for one of the league’s best rushing attacks. The Eagles are 11-1 for the fourth time in franchise history thanks to a dynamic offense and stingy defense.

The success on offense starts up front.

The Eagles ran for 363 yards in a 40-33 victory over Green Bay in Week 12. Hurts led the way with 157 yards and Miles Sanders ran for 143. They followed that performance up with 386 yards in the air in a 35-10 rout over Tennessee last week. The 1987 Los Angeles Raiders were the last team to have more than 350 yards passing in a game a week after rushing for more than 350.

“The guys up front are something special,” Sanders said.

They’re not looking for accolades, either.

“The five guys, we’re all comfortable,” Mailata said. “If we can look at each other and know that we had each other’s backs and we gave it everything while everyone else gets the credit, we’re cool with that, we’re happy with that.”

Mailata was a rugby star in Australia who had never played organized football until the Eagles drafted him in the seventh round in 2018. He’s developed into one of the best in the business. The credit goes to offensive line coach Jeff Stoutland.

“He taught me everything from how to sit in a classroom to stand on the sideline,” Mailata said.

“We’re all members of Stoutland University,” Kelce said after the victory over the Packers. “I’ve been fortunate to be with this guy for over a decade. ... I know Philadelphia doesn’t take him for granted. He’s been a mainstay with the Eagles organization for a long time. There’s a reason for that. He’s unbelievable at his job.”

Stoutland joined the Eagles in 2013 after two seasons at Alabama. The 60-year-old from Staten Island prefers others get the attention but players and coaches are often quick to give him praise.

“He’s demanding,” Sirianni said. “He tries to put the players in the best possible position. ... He just leaves no stone unturned. He’s very detailed. He gets the best out of those guys, again, because he’s demanding on them. I just love the way he coaches, and the guys clearly respond to that and play well for him. He just does so many things the right way.”

The AP’s updated voting system for all the NFL Awards will allow more players to get recognition. Voters will rank their top five picks for MVP and top three picks for other awards instead of selecting one player for each. Each spot will be weighted to determine winners, second-place finishers and so on.

An offensive lineman isn’t going to win MVP but now there’s a better possibility to earn a vote.

“I would go so far as to say that a guy like Jason Kelce should be considered for MVP himself,” former NFL quarterback Robert Griffin III, the NFL’s 2012 Offensive Rookie of the Year, said on the AP Pro Football Podcast. “That offensive line, the best in football, 100%. They can do it both ways whether it’s in the ground game, getting to the next level like Kelce does better than anybody else or in the passing game giving Jalen Hurts time to go and make plays. They have been phenomenal and they’ve done it being a little bit banged-up. So once they get back to full health, look out. The Eagles are going to be coming for everybody.”