Browns QB Mayfield tells kids 'to be yourself' at camp 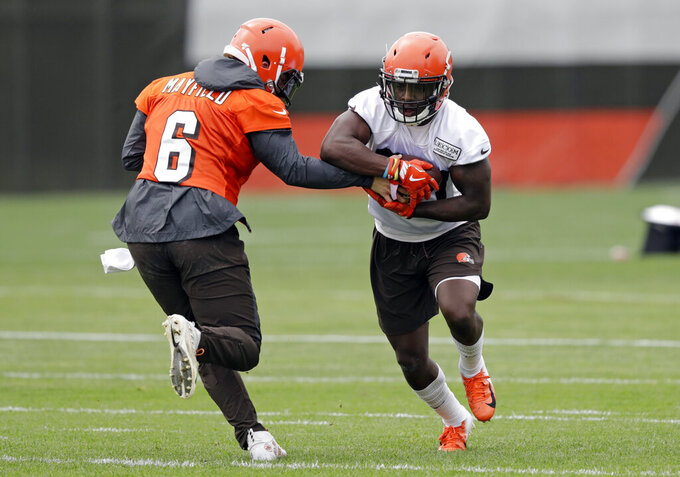 However, he didn't take attendance at his two-day football camp, so Odell Beckham Jr. can relax.

The Cleveland quarterback, who has long-suffering Browns fans crazed and counting down the days until the start of the season, hosted over 500 kids Saturday for a youth camp at Mayfield High School — fitting name, no relation.

Mayfield spent more than three hours on the field and seemed to enjoy every moment while interacting with youngsters dreaming of following his path to the NFL. He posed for photos, talked some trash and bent down to tie one boy's sneaker between plays.

Afterward, Mayfield said his message was to inspire.

Mayfield danced to "Old Town Road" with the campers and urged them to be ready for Sunday's activities.

"Are you going to wake up feeling dangerous tomorrow?" he said, repeating a phrase he made famous last season.

Mayfield then cracked a wide smile when the kids broke into a chant of "Ba-ker! Ba-ker!"

During his media availability, Mayfield said he's been helping recruit free agent Pro Bowl defensive tackle Gerald McCoy, a fellow Oklahoma Sooner who is trying to decide whether to sign with the Browns, Ravens or Panthers.

The camp is a break for Mayfield, who has been busy learning Cleveland's new offense over the past three weeks. There are enormous expectations for the Browns in 2019, the hopes pushed by the offseason acquisition of Beckham, the superstar wide receiver who has skipped all but one of the Browns' nine voluntary OTA workouts.

Browns coach Freddie Kitchens, who has defended Beckham's absence, said this week the three-time Pro Bowler has missed "a lot ... the offense" while vacationing in Europe, working out in California and attending the Monaco Grand Prix.

He's expected to be at the team's mandatory minicamp starting Tuesday. Mayfield, without naming Beckham, said it will be good to have all his teammates on the field.

"Just to have everybody together," Mayfield said. "You don't get too many times that it's not during the season and everybody's got their own routines. It'll be enjoyable next week."

Until then, Mayfield said it was important for him to give all he had to the kids.