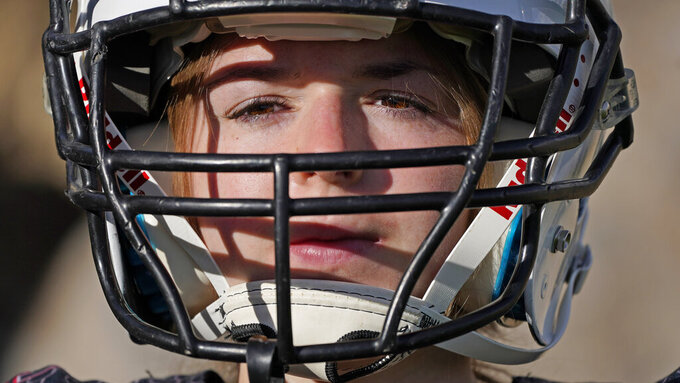 Sam Gordon poses for a photograph, Oct. 20, 2020, in Herriman, Utah. Gordon was the only girl in a tackle football league when she started playing the game at age 9. Now, Gordon hopes she can give girls a chance to play on female-only high school teams through a lawsuit. (AP Photo/Rick Bowmer)

SALT LAKE CITY (AP) — Sam Gordon's staggering football skills made her famous at age 9. But they didn't make her fully welcome on the field.

As the only girl in a tackle football league in Utah, she heard parents from opposing teams urge their kids to “beat the girl.”

“I had a target on my back, and it was in the shape of a ponytail,” said Gordon, now 17. “It was awesome to prove to them that I’m more than just a girl in pads. I’m actually a football player.”

Viral videos viewed by millions of her playing catapulted Gordon to a place in the country’s most popular sport, including the ESPN awards and Super Bowl commercials. But very few other women have gotten a toehold in football.

To help change that, Gordon went to court.

She sued her school district and two others for refusing to create a girls' football program under Title IX, saying many girls like her don't feel comfortable playing with boys and some are even harassed. One player who testified said she was forced to change in the boys’ locker room at away games and often faced discriminatory treatment by her male coach and teammates.

But plenty of girls want to play, Gordon said, pointing to an all-female league she started with her father six years ago that's drawn hundreds of girls from the Salt Lake City area.

The districts and state athletic officials are pushing back in court, though. They argue a girls football program would be unsustainable and require new infrastructure they shouldn't be responsible for.

Closing arguments are set for this week. The school districts and state athletics association either declined or didn't respond to requests for comment.

Gordon's push to expand access to the sport to more women comes as concerns about youth and professional football players getting injured has reached a fever pitch. She said the league has made minor adjustments to prioritize safety such as removing punt returns, kickoffs and kick returns from the game to limit plays that can often result in injuries.

Jen Welter became the first woman in an NFL mentoring program for coaches when she joined the Arizona Cardinals' training camp coaching staff in 2015. This year, there are eight female assistant coaches in the league, including the San Francisco 49ers' Katie Sowers who became the first woman to coach in a Super Bowl last year.

Football is considered “America’s game," but it is one of few sports that doesn’t have gender parity at any level, from the peewees to the pros, in terms of opportunity or compensation, Welter said.

“For a girl to play on a boys team, she is the exception,” Welter said. “Yet when you see a women’s tackle team or a girls' tackle team they’re all in it together. We encourage that in all sports so why would football be so different?”

Some other opportunities for girls who want to play football are starting to open up. The National Association of Intercollegiate Athletics and the NFL announced in May that women’s flag football will become a nationally recognized college varsity sport by 2021. That opportunity could be life changing for young girls and their path toward receiving a college education, Welter said.

“That changes everything,” she said. “Because now that we’ve seen life trajectory changing opportunities in football, that means it’s a viable dream and goal.”

Even if Gordon wins her lawsuit, she may not get a chance to play for her school under the Friday night lights. She's a high school senior now, so she'd get one spring season at best.

But even if she doesn’t get to play with her school's jersey, she said, the lawsuit would still be worth it for the girls who come after her.

“For them to get the opportunity to go and play and to ... destigmatize girls playing contact sports and being tough and rowdy,” she said. “It’s more than just football, and I would be proud to be a part of that.”

Sophia Eppolito is a corps member for the Associated Press/Report for America Statehouse News Initiative. Report for America is a nonprofit national service program that places journalists in local newsrooms to report on undercovered issues.