Gase focused on Jets' finale, not speculation about future 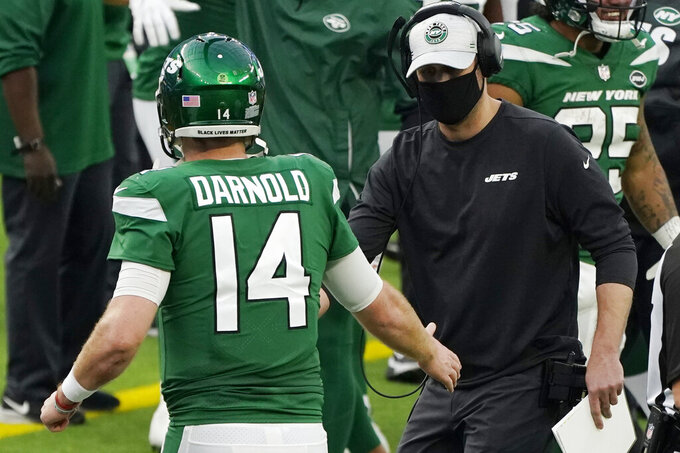 He was here to win, oversee a consistently productive offense and develop Sam Darnold into a franchise quarterback.

Gase failed on all three counts. And that has the coach likely in his last days on the job.

To his credit, he has maintained the same approach as he has every day since taking over the Jets. He's focused on the task at hand and not the rumors swirling about his future — and the frequent questions about all the buzz.

“I mean, that’s what it is,” Gase said Wednesday. “I’ve been here two years. I think that started about Week 6 last year.”

He was only half-joking.

Gase wasn't a popular pick among many long-suffering Jets fans who were turned off by the coach's struggles in three seasons with AFC East-rival Miami. His somewhat awkward introductory news conference only fueled the naysayers.

A tough start capped by a strong finish and 7-9 record didn't instill much confidence. Then came this season's franchise-worst 0-13 start, Darnold's regression and the offense's continued woes. A two-game winning streak won't help, and WFAN reported Tuesday that Gase has already been told he will be out after the season finale at New England.

But he's well aware of all the chatter. Again, though, he is trying to keep that stuff out of the building — and his mind.

“You’re going to hate this answer, but it’s the best one I can give you: I learned probably when I was 22 years old, Nick Saban told me you do your job until somebody tells you different,” Gase said. “So, that’s what I’m going to be focused on, and my job is to get us ready to go for this Sunday and go try to win a game.”

The problem has been that those victories have been too few and far between. Gase is 9-22 with the Jets, and a lot of that is on his offense.

Injuries have played a role, for sure. And so did the lack of a real offseason and preseason games. But that was what every other team dealt with, too. Gase has lamented the fact he didn't do a good enough job with Darnold, unable to get the 23-year-old quarterback to take a drastic positive step in his development.

New York's offense has been much better of late, but was absolutely inept for a large chunk of the season. The Jets are on the verge of finishing last in the NFL in total offense for the second straight year — not a good look for a coach who was hailed by CEO Christopher Johnson as “a brilliant offensive mind” early this season.

"There’s no point in looking at them, and I know where we’re at — it’s not good," Gase said of the team's statistics. "We had way too many games where we were just so unproductive. I feel like we’ve done some things better in the last month or so, still had that Seattle game, we just couldn’t do anything. It’s those games where you just have absolutely nothing: no yards, no points, third-down (and) red-zone percentage is crap.

“You have more than like two or three of those, it’s just going to be bad.”

And that's mostly what the Jets have been on offense the past two seasons. Gase will likely be looking for another job somewhere at this time next week, but is trying to not be concerned that his reputation has taken a hit around the league for New York's struggles during his time as the head coach.

“I don’t know if worry is really the right word,” he said. “It pisses me off because if there’s one side of the ball that I want to make sure is right, (it's) that one. It has not happened, and that’s on me.”

Several players have recently praised Gase, saying they enjoy playing for him despite the results in the games.

Even Patriots coach Bill Belichick was extremely complimentary of Gase this week, saying he has a lot of respect for him, is a “tough, tough coach to coach against" and has done a good job in a difficult situation this season.

“Any time the guy I’m pretty sure the majority of (the media) have said is, if not the best head coach ever, one of the best head coaches ever," Gase said, "for him to say anything positive at least there’s something to that of it puts things in perspective sometimes.

"Right now, it’s we didn’t do enough to win more games and we didn’t get better fast enough.”

NOTES: Rookie RB La'Mical Perine is being placed on the reserve/COVID-19 list after he became the Jets' first player to test positive during the regular season. “Not great timing,” Gase said. “I can say that.” With Perine out and Frank Gore (bruised lung) and placed on injured reserve, Ty Johnson and Josh Adams are the only other running backs on the active roster. ... RG Greg Van Roten (foot) and LG Alex Lewis (non-football injury) were both designated to return to practice, giving them a chance to play Sunday. ... The Jets placed backup OL Josh Andrews (thigh) on IR. ... CB Javelin Guidry (knee) didn't practice during the team's walkthrough. WR Jeff Smith (shoulder) was listed as limited. ... TE Ryan Griffin was activated Tuesday from the reserve/COVID-19 list after missing last Sunday's game because a close contact tested positive.