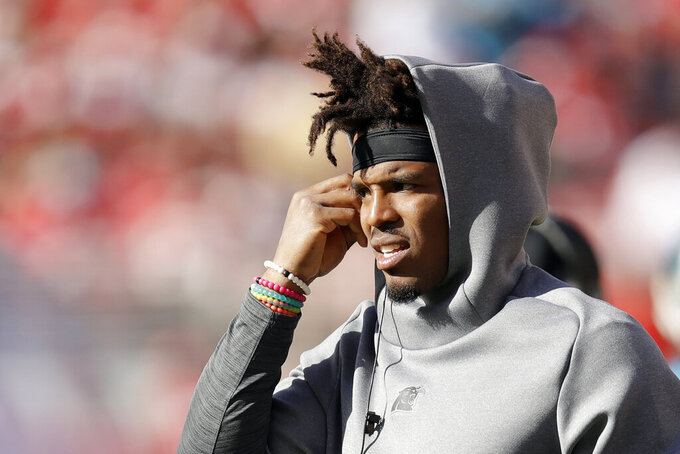 FILE - In this Oct. 27, 2019, file photo, Carolina Panthers quarterback Cam Newton stands on the sidelines during the second half of an NFL football game against the against the San Francisco 49ers in Santa Clara, Calif Jameis Winston, Jadeveon Clowney and Newtown didn't have to wait long at all to find homes in the NFL when they came out of college. The three former No. 1 overall draft picks are finding things moving much more slowly as they search for new homes or contracts this offseason. (AP Photo/Ben Margot, File)

CHARLOTTE, N.C. (AP) — The Cam Newton era is over in Carolina, as the Panthers released the 30-year-old quarterback after nine seasons.

The move became a mere formality after the Panthers made it clear last week they were moving on from Newton by giving him permission to seek a trade and then agreeing to a three-year, $63 million contract with free agent quarterback Teddy Bridgewater about 90 minutes later.

On Monday night, Newton posted on his Instagram account that he was “hungrier” now because he is “unemployed.”

"Cam has meant a lot to this organization and the Carolinas," Panthers general manager Marty Hurney said in a statement Tuesday. “Everyone saw his performances on the field. I had the privilege of seeing how hard he worked off the field, and his commitment to this team when no one was watching. He's the ultimate competitor and it physically hurts him to lose. He willed this team to victory on many occasions and will always be considered one of the greatest players in the history of this franchise."

Hurney added: "His contributions to this team, this community and the game of football will leave a lasting impact on our organization.”

The breakup did not end well.

After the Panthers announced Newton was free to seek a trade, the QB took to Twitter, posting a message directed at the front office that read, "Stop the word play!! I never asked for it!! There is no dodging this one; I love the Panthers to death and will always love you guys!! Please do not try and play me or manipulate the narrative and act like I wanted this: You forced me into this.”

Given the inevitable outcome of a Newton-Panthers breakup, it was not surprising that no teams were willing to trade for Newton.

Newton now becomes a free agent and can sign with another NFL team immediately.

The move frees up $19.1 million in salary cap space for the Panthers. They'll have to absorb $2 million in dead cap money.

Panthers All-Pro running back Christian McCaffrey thanked Newton on Instagram Tuesday, posting, “You changed the way I approach the game and put the fun back in it for me. I’ll always owe you for that. I speak for the Carolinas when I say thank you for all memories and smiles you brought us. Love!"

Newton joined the Panthers in 2011 as the top pick in the draft after winning a national championship and the Heisman Trophy at Auburn. He stepped in right away as the team's starting quarterback and threw for 400 yards in each of his first two starts.

Newton went on to throw a franchise-record 29,041 yards and 182 touchdowns in nine seasons with the Panthers and ran for 58 touchdowns, the most ever by an NFL quarterback.

His best season came in 2015 when he led the Panthers to a 15-1 record in the regular season and an NFC championship when he threw for 3,837 yards and combined for 35 touchdowns en route to earning league MVP honors.

But Newton struggled in a 24-10 Super Bowl loss to the Denver Broncos and was widely criticized for not jumping on a loose ball after a strip-sack by Von Miller late in the game. Afterward, a downtrodden Newton answered questions about the loss with abbreviated answers before abruptly walking out of the interview session.

Newton became a fan favorite on the field in Carolina early in his tenure, endearing himself to young fans by pretending to rip apart his jersey like Superman during touchdown celebrations and then giving the football away to young fans.

On the field, he used his chiseled 6-foot-5, 240-pound frame to run over defenders in Carolina's zone-read offense and his strength and elusiveness to turn almost certain sacks into runs for first downs.

But during his tenure in Carolina he was hit more than any quarterback in NFL history — which may have taken a toll on him physically.

He had surgery for a partially torn rotator cuff in his right shoulder last offseason after struggling to throw the ball more than 20 yards downfield in the second half of the 2018 season. He returned to the field last summer in training camp, but injured his foot in the third preseason game at New England. He battled back to start the first two regular-season games, but it was evident he wasn't the same player and was eventually placed on injured reserve where he had surgery for a Lisfranc fracture.

He lost his last eight starts for the Panthers.

Questions remain about Newton's health moving forward, which could limit his options in free agency especially with doctors currently unable to put players through medical examinations because of the coronavirus pandemic.

“They could’ve did this two weeks ago," tweeted former Panthers wide receiver Torrey Smith. "Terrible timing for a Qb.”