Winston: Pursuit of Saints back-up role a sign of maturity 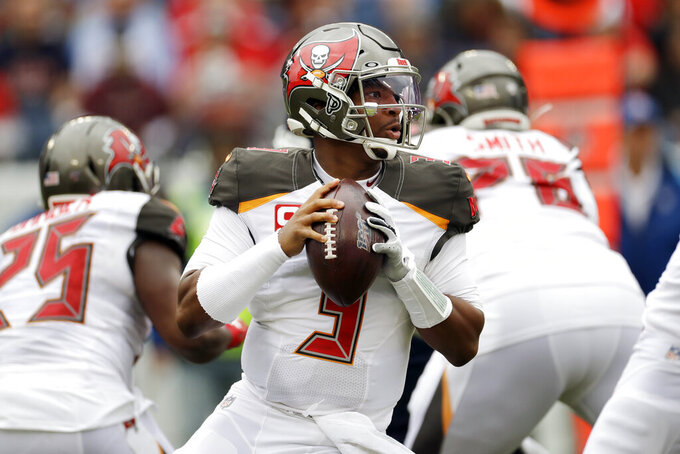 NEW ORLEANS (AP) — The reeducation of Jameis Winston is beginning with the New Orleans Saints.

“Everyone needs those humble experiences,” said Winston, who in March saw his first NFL employer unceremoniously let him walk in free agency and replace him with six-time Super Bowl winner Tom Brady. “It’s another chapter in my life that I’m going to learn from.”

Winston, who agreed to a one-year, $1.1 million contract with the Saints this week, hasn't always been known for making the wisest choices.

“You’ve got to respect the game. The game will always be bigger than you,” Winston said Wednesday during a conference call, echoing comments he said he learned from mentor Derrick Brooks, a former Florida State and NFL star. “I didn’t think I’d be in this position this time last year, but God had a different plan and I’m excited for the plan that he has for me going forward.”

Winston became one of four quarterbacks on the Saints' roster, along with Brees, utility player Taysom Hill and seventh-round draft choice Tommy Stevens.

“One thing I’m really excited to learn — the most exciting thing — the way this quarterback room functions," Winston said. "What’s coach Payton’s approach to every week. What’s Drew’s approach. What’s Taysom doing in the room that I can add to my game. Just trying to find different things by serving this team and learning from everybody.”

Because Hill's various roles on offense and special teams expose him to a lot of physical contact, Winston will be in more of a traditional back-up role to Brees, just as Teddy Bridgewater was the past two seasons before taking a free-agent offer to replace Cam Newton in Carolina.

Now Winston will try to repackage himself as a prospective franchise QB in much the same way.

“When you see what happened last year with the amount of play time Taysom and Teddy got — I’m not saying I’m going to expect that this year — but those guys were prepared and that’s what I’m going to be,” Winston said. "You have to be a student of the game. So, now I actually get a chance to dive into that more and I actually have a (presumptive) Hall-of-Fame quarterback that I’m learning from as opposed to trying to learn by myself or use Google.”

Winston's athletic ability has never been in question. Last season he led the NFL with 5,109 yards passing and ranked second with 33 touchdown passes, but also obtained the somewhat dubious distinction of being the first NFL QB with at least 30 TDs and 30 interceptions in the same season. But the Bucs have struggled to win with Winston, going 28-42 in games he started.

Winston's 2018 suspension resulted from allegations by a female ride-share service driver that the quarterback made unwanted sexual advances several years earlier. The driver never reported the matter to authorities but did notify her employer, Uber.

During college, Winston was accused of raping a fellow student at FSU but was never charged. The university in 2016 settled a lawsuit with Winston’s accuser over its handling of the allegations.

Winston also was implicated in a shoplifting case in Tallahassee involving about $33 in crab legs and crawfish.

Touching on recent experiences getting married, raising his young son and turning to six-day-a-week, largely vegan diet this offseason, Winston describes his decision to become Brees' understudy as but one sign of his growth as a person.

“I know I’ve grown and matured,” he said. "Being a father to a 1-year-old that looks just like you and you’re having to make an imprint on his life, teaching him and showing him how to have high character and how to act when no one is looking. And I have a wife that I have to love and cherish, and I plan on doing that.”

Winston also touched on an expression learned from one of his trainers.