Zalatoris, Day charge past Rahm to share lead at Farmers 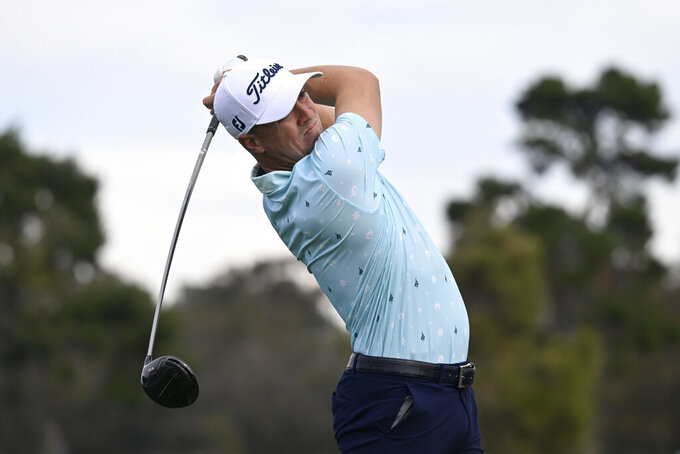 Justin Thomas hits his tee shot on the second hole of the South Course during the third round of the Farmers Insurance Open golf tournament, Friday Jan. 28, 2022, in San Diego. (AP Photo/Denis Poroy) 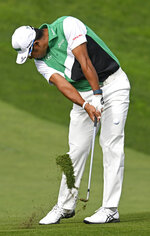 SAN DIEGO (AP) — Will Zalatoris and Jason Day charged past Jon Rahm and Justin Thomas on Friday at Torrey Pines to share the third-round lead at the Farmers Insurance Open.

Zalatoris posted the day's best round with a 7-under 65, and two-time Farmers champion Day shot a 67. They were at 14 under heading to the final round of the tournament, which will finish Saturday to avoid a television conflict with the NFL's two conference championship games.

Rahm and Aaron Rai were 13 under, and Thomas, Sungjae Im and Cameron Tringale were another shot back. There were 24 players within five shots of the co-leaders after an eventful moving day.

Zalatoris surged from six shots back after two rounds and moved into contention for his first career PGA Tour victory, yet his round could have been several strokes better if his putter had kept up with the rest of his formidable play. The 25-year-old missed several birdie putts, including a pair inside 5 feet, but stayed in the lead alongside several more accomplished pros.

“Obviously, a lot of great vibes here,” said Zalatoris, who made his first career PGA Tour start as a pro at Torrey Pines in 2018. “This is, I think, by far one of the best golf courses that suits my game. Just keep enjoying it and whatever happens, happens.”

Day, who won a playoff in 2018 to claim the Farmers title, finished his third round superbly with four birdies on the final six holes. The Australian former top-ranked pro buried a 27-foot birdie putt on the 16th and got firmly into contention on the course where he also won in 2015.

“It’s nice to be able to know that I’ve done it on the golf course twice, not only in regulation but also in playoffs,” said Day, who hasn't won on tour since that playoff victory in 2018. “But tomorrow is a new day, and you don’t know what’s going to come. I’ve just got to get a good rest tonight, get into it tomorrow and just be patient.”

Rahm rebounded from a double bogey on the 10th and another bogey on the 12th to stay firmly in contention with a 72 on the course where he got his first PGA Tour win in 2017 and his first major victory at the U.S. Open last year.

“I played great, I think,” Rahm said. “I feel like I played a lot better than the score shows. There was only two holes where I struggled and probably gave a couple too many back. Today is one of those days that happen at Torrey Pines South. Played great golf, but I just couldn’t take the opportunities, and it’s going to be hard to shoot low.”

Thomas and Rahm both finished the front nine with dramatic birdie putts. Thomas holed out from 41 feet, and Rahm hit his from nearly 38 feet to the thrilled roars of the gallery.

But Thomas missed an 8-foot par putt on the 15th and then took a penalty stroke on the 17th when his drive went out of bounds before finishing his 73.

Rahm, Thomas and Adam Schenk shared the lead after two rounds, but Schenk faltered even more with a third-round 75.

Rai jumped into contention for his first career PGA Tour victory by finishing his 68 with back-to-back birdies. The Englishman and former Scottish Open champion is a six-time winner internationally.

“It’s always nice to have the validation through results to know that you can compete and your game is good enough,” Rai said.

Zalatoris began the third round six shots off the lead, and hold out from 39 yards for eagle on the second hole Friday. He made a 9-foot birdie putt on the fourth, but missed from inside 15 feet on the fifth and from inside 8 feet on the seventh.

“Today was the best I’ve ever driven a golf ball by far,” Zalatoris said.