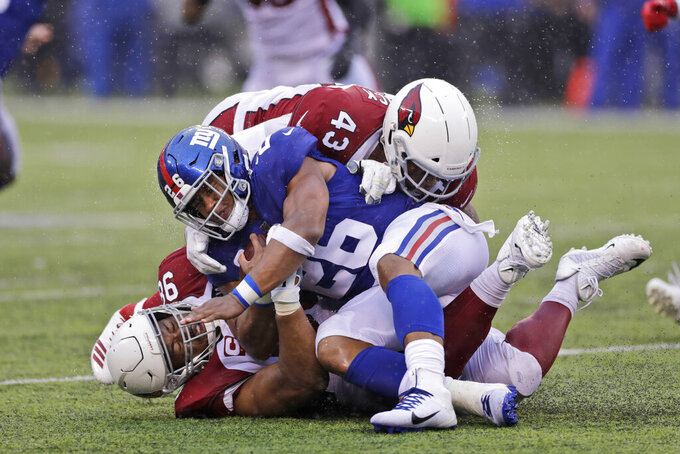 EAST RUTHERFORD, N.J. (AP) — Saquon Barkley returned after missing three games with a sprained right ankle, and it really didn't do much for the New York Giants' offense.

The Arizona Cardinals made sure of that Sunday as they limited Barkley to 72 yards rushing and a touchdown in a 27-21 victory Sunday that sent the Giants (2-5) to their third straight loss.

The return of last year's NFL Offensive Rookie of the Year and tight end Evan Engram was supposed to help the offense and rookie quarterback Daniel Jones.

The offense scored 14 points, with special teams providing the other seven on a blocked punt. The offensive line allowed Jones to be sacked a season-high eight times and the offense generated 263 yards and turned the ball over three times, setting up 17 points for the Cardinals (3-3-1).

While Barkley said his ankle felt fine, he only had two rushes of 10 yards or more. Half of his 18 rushes were for either negative yards (three) or between just 1 and 3 yards (six).

"I think as a whole, we have to do better," Barkley said. "We didn't win the game so anytime you don't win the game, we have to be better. The object of offense is score more points than the other team does and we didn't accomplish that today. We have to find a way to do that."

Barkley, who also caught three passes for 8 yards, could have had a much better day. He had a 32-yard run nullified by a holding penalty against left guard Will Hernandez.

Whether it would have been a 32-yard run without the hold is another question.

"I felt like I was running well," said Barkley, who left briefly in the third quarter after someone fell on his ankle. "I think I did a little too much on some stuff, but that's part of my game. Sometimes it doesn't work, most of the time it works, so just have to go watch film and see what I could do better to help my team win."

Jones also has to do a better job of protecting the ball. He threw an interception and lost two fumbles.

The offensive line also has to step up after allowing Jones to take a beating. He was sacked by Chandler Jones four times, and two of the eight sacks led to lost fumbles.

"Obviously, we didn't do our job today, the O-line and whoever else is involved," guard Kevin Zeitler said. "We put ourselves in some terrible situations and you can't do that. You don't win games like that."

Even with Barkley back in the lineup.

The next step is to end the skid at Detroit next weekend.

"We are in a spot where we have to go back to the drawing board and watch film and get ready for Detroit because that's our next game," Barkley said. "Try to get a win and try to get some things going."