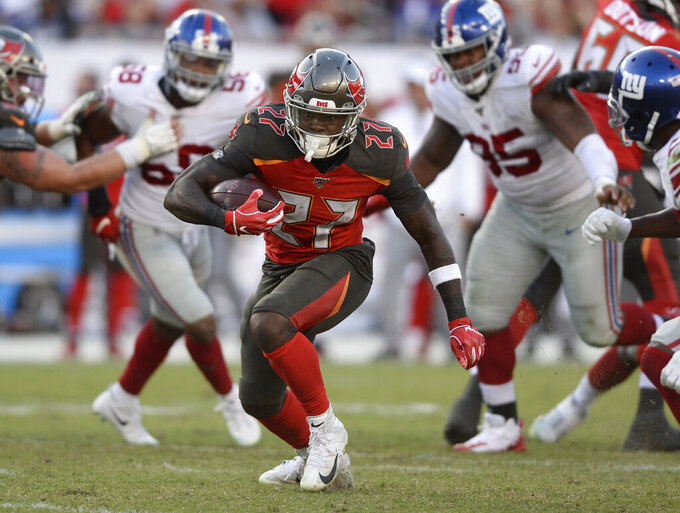 Tampa Bay Buccaneers running back Ronald Jones (27) runs against the New York Giants during the second half of an NFL football game Sunday, Sept. 22, 2019, in Tampa, Fla. (AP Photo/Jason Behnken)

EAST RUTHERFORD, N.J. (AP) — The stats speak for themselves.

The Giants are also 16th in sacks, toward the bottom of the league in yards rushing per game, have one interception and forced no fumbles.

It's certainly not the recipe for success — and the Giants know it.

"The numbers are the numbers," Giants defensive coordinator James Bettcher said after Thursday's practice session, as his team prepares to host the Washington Redskins on Sunday. "I don't pay too much attention to the numbers. There are times that we have been toward the top as well. Our players are working very hard on defense."

Bettcher said that the Giants are coming off a second half against the Tampa Bay Buccaneers where they played well, enabling the team to come back from an 18-point halftime deficit to win 32-31, allowing just three points in the second half.

Bettcher was also encouraged by two solid days of practice.

"We had two outstanding days of practice," Bettcher said. "I think we realize that how you get better is with repetition. You identify the problem and go over it. We have to call things better, coach things better and execute better. Those things have to happen for us to play better."

One of the most glaring troubles the Giants have experienced has been with their secondary. Even in victory, the Giants allowed Jameis Winston to pass for 380 yards and for receiver Mike Evans to finish with 190 yards, mostly going up against cornerback Janoris Jenkins.

Another secondary member under some criticism is safety Jabrill Peppers. Acquired in the trade with the Cleveland Browns for Odell Beckham, Jr., Peppers, the New Jersey native, has struggled somewhat, especially in pass coverage.

"I think Jabrill has played extremely hard," Bettcher said. "I don't see the ball going his way a ton of times. When I see Jabrill, I see a guy who is competing his tail off and working just as hard as everyone else."

While Jenkins was unavailable after practice, Peppers talked with reporters.

"I definitely have to play better if I'm going to play that position," said Peppers, the Browns' first-round selection in 2017 out of Michigan. "I'm hungry out there, but one of my problems has been that I've been trying to force the issue.

"Instead of letting the game come to me, I'm pushing myself. I don't want to be forced into situations and be out of position on plays. I tend to second-guess myself a lot and there have been plays were I have been a little late to the ball. Those were plays that should have been made."

Peppers was asked if he had seen the Giants' defensive team statistics.

"It definitely hurts," Peppers said. "I try not to pay too much attention to stats. Maybe later in the week, I'll take a look at them. But it's early in the season. I'm not going out looking for them. I think it's definitely motivation to get better."

"I think I would be prepared for whoever we were going to face," Peppers said. "It's a divisional foe and we'll see them twice. But I'm not too worried about it."

"I don't pay attention to that stuff," said Baker, the team's first-round draft pick out of Georgia. "I don't think any secondary wants to have the worst number of yards. I think we have to take it upon ourselves to make plays better. But I think we're all going to take the same approach."

The Giants will be without defensive captain and veteran linebacker Alec Ogletree, who sat out practice again with a pulled hamstring. Ogletree, the seven-year veteran, hurt himself trying to return an apparent fumble that had already been blown dead.

"I definitely wish they (the officials) made the right decision and blown the whistle," Ogletree said. "I saw the ball falling. I thought it was an incomplete pass, but people were saying, 'Pick up the ball, pick up the ball.' I didn't hear a whistle. It's the kind of play where you're damned if you do and damned if you don't. It doesn't make it any better. I'm just going through the rehab process, not take any chances and whenever they (the team doctors) clear me to come back, then I'll be ready."