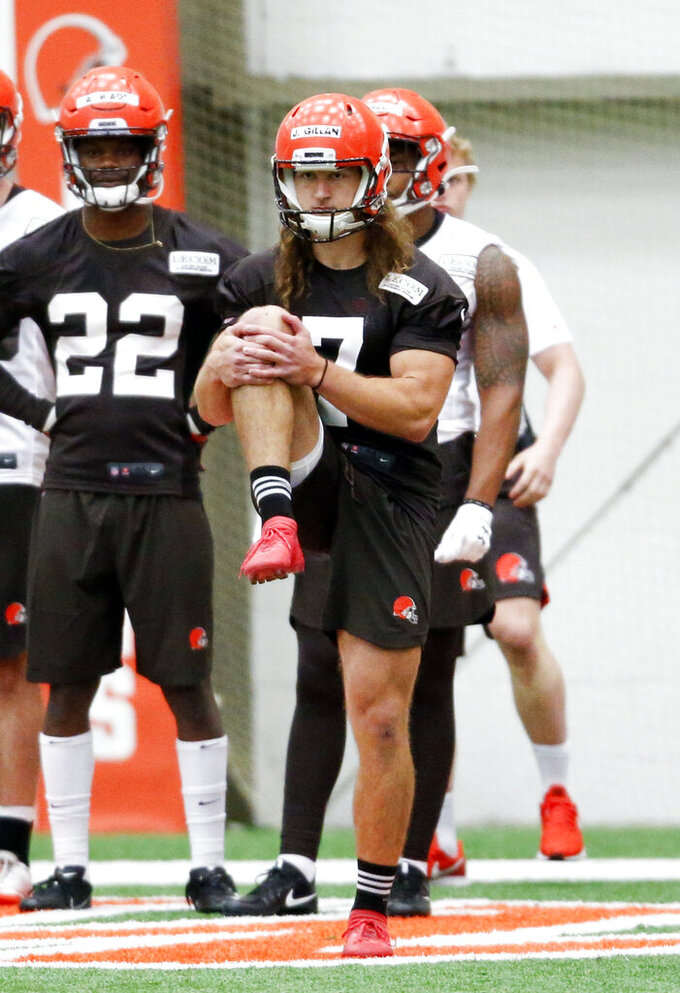 In this Friday, May 3, 2019 photo, Cleveland Browns punter Jamie Gillan (7) loosens up during NFL football rookie minicamp in Berea, Ohio. While preparing for the draft, Gillan kicked so hard he ruined three regulation NFL footballs, enhancing the story behind "The Scottish Hammer" who started in Scotland's highlands, stopped in Arkansas and is now in Cleveland trying to win a punting job with the Browns. (AP Photo/Ron Schwane) 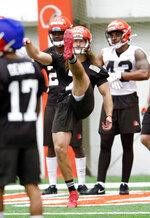 BEREA, Ohio (AP) — Jamie Gillan already has the catchy nickname and ready-for-Hollywood back story. He is no ordinary rookie.

With his long hair pulled back into a ponytail and a thick Scottish accent unaffected by his college days in Arkansas, the Cleveland Browns punter looks as if he just walked off the set of "Game of Thrones."

No dragons, but there is a castle in his background.

"At boarding school," he said. "It looked a lot like Hogwarts and stuff."

And yes, Gillan recently ruined three official NFL footballs because he kicked them too hard.

Born in the Highlands of Scotland, Gillan moved to the U.S. as a 16-year-old when his father, who works in anti-submarine warfare for the Royal Armed Forces, was relocated to Maryland. Gillan played rugby and soccer as a kid and acknowledged not knowing much about American football until attending a high school game in Leonardtown, Maryland, which coincidentally is the hometown of Browns general manager John Dorsey.

Unaware at the time, Gillan saw his future.

"I watched a kicker, he didn't make the extra point, like it hit the back of the offensive lineman," Gillan said. "I went up to the coach after the game and I told him I had a rugby-playing background, and I've been able to do torpedo punts since I was 8 years old and I can do all three for you if you wanted. We went out the next day and he literally told me, 'OK, make the ball spiral,' so I made it spiral. And then I kicked a long field goal in front of him and then he just said, 'All right, you're on the team.'"

Gillan wound up playing in a handful of games before his life would take another unexpected turn.

A friend found a Facebook posting from Arkansas-Pine Bluff, which was looking for a punter after one of the school's recruits decommitted. Gillan put together some game film and sent it to the school, which offered him a full scholarship. The idea of kicking at a Division I program with all its perks was irresistible. "Free weight room. Free balls to kick. Free food, so I'm happy," Gillen said, recalling his whirlwind recruitment. "That's kind of how it went."

There was one minor problem.

"I'm not going to lie to you guys," he told reporters Saturday during the Browns' rookie minicamp. "I had not heard of the state of Arkansas in my life before they called."

He did some quick research about his new home.

"On the plane," he said. "I pulled out the map and I saw Pine Bluff and said, 'Oh, this looks like a decent place.'"

Gillan handled punting and kicking duties at Arkansas-Pine Bluff, averaging 43.7 yards per punt as a junior and dropping 27 punts inside the opponents' 20-yard line during his senior season. He also set the school record with a 52-yard field goal.

The likable Gillan caught the eye of several pro teams and then spent the winter in Arkansas working out and perfecting his craft with the hopes of being drafted.

In January, he bought four NFL balls — "they're like 100 bucks apiece" — and was kicking in cold weather when his big plans began to deflate — literally.

"I was kicking them and I could hear the air coming out of them, three out of the four," he said. "I was like, 'Oh, man.' So I treated the last one with a lot of care until the Browns sent me some footballs, which was awesome."

He also received a care package from the San Francisco 49ers.

At his workout for the Browns and 49ers, Gillan said his new family in Arkansas cheered every kick.

"I had the football team supporting in one corner," he said. "We had all of the staff out there supporting me. The school I came from had my back the whole way through it. I was a captain of the team as well, so they all wanted to be out there. I wasn't nervous."

Gillan never expected to be drafted, but he never imagined living in America or Arkansas either.

Now he is in Cleveland, where he will compete in training camp with Browns incumbent punter Britton Colquitt, a Pro Bowl alternate last season.

"I did a lot of research on him before I came here," Gillan said. "He's such a great punter, great with technique and fundamentals. With him going into his 10th year, what better opportunity than to learn from someone like that?"