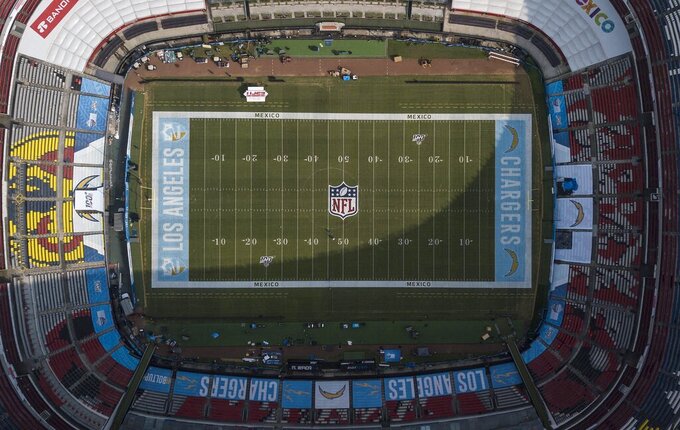 An aerial view of the Azteca Stadium in Mexico City, Saturday, Nov. 16, 2019, where the Kansas City Chiefs and Los Angeles Rams will face off for a regular-season Monday Night Football game. Heavy rain and heavy use last year left the grass unfit for the AFC matchup, forcing the Chiefs-Rams game to be relocated to Los Angeles. (AP Photo/Christian Palma) 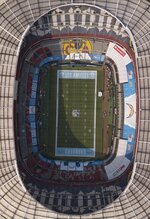 MEXICO CITY (AP) — Mexico City’s Azteca Stadium is looking to put its best face forward Monday night when it hosts a regular-season matchup between the Kansas City Chiefs and the Los Angeles Chargers, after last season’s NFL game had to be moved to the L.A. Coliseum in a major black eye for the arena and the league.

Poor field conditions forced the last-minute change of venue, which prompted headlines like “Colossal Shame” from the Mexican sports newspaper Record and others, and since then league and stadium officials have taken steps to ensure the marquee event comes off without a hitch in one of the NFL’s most important overseas markets.

The hybrid turf that never quite took in Azteca has been swapped out for natural grass. Women’s soccer league matches were moved to a different venue, and fewer events in general have been scheduled for the 84,000-seat Azteca. Last year, concerts in the days leading up to the scheduled game between the Chiefs and the Los Angeles Rams contributed to the ragged field conditions.

This year, the most recent soccer game in Azteca took place Nov. 2, giving groundskeepers time to ensure the field is tip-top.

“The field is in very good condition,” said Arturo Olivé, director of the NFL’s office in Mexico. “It looks spectacular, and we are very happy with the great work that has been carried out.”

Starting in January, Olivé said, the league has been sending monitors to Mexico to avoid a repeat of 2018’s debacle, and he has been making weekly visits to the stadium to file progress reports.

“The NFL people did not come to judge what was being done, but rather as part of a working team contributing solutions,” Olivé said.

Last November’s fiasco was also a major headache for Televisa, the largest broadcaster in Latin America, which owns the stadium.

Renato Luis Laurentti, who is responsible for the upgrades, said this week that the field was fertilized and irrigated with orange juice, vitamins, carbohydrates and proteins. Images published by the company on social media showed the grass apparently in perfect shape.

Monday will mark the fourth regular-season NFL game played at Azteca, which underwent a renovation in 2016 partly with the league in mind. Capacity was reduced from over 100,000 previously, and locker rooms designed to accommodate NFL teams were added.

The 49ers and Cardinals faced off here in 2005, followed by the Raiders and Texans in 2016 and the Patriots and Raiders in 2017. Before that it hosted several preseason games as well, including a Chiefs victory over the Cowboys in 1996.

It will be the Chargers’ first visit to Mexico, where according to the league’s local office the team has a strong following — mostly in the northern city of Tijuana just across the border from San Diego, which the Chargers long called home before moving to Los Angeles after the 2016 season.

The push to keep playing games in Mexico is no accident. While soccer, known as “fútbol” in Spanish, remains king, the NFL estimates there are some 25 million fans of football in the country. Many people get together in homes, bars and movie theaters to watch live broadcasts, and it’s common to see fans wearing jerseys of their favorite teams. The Steelers, Cowboys, Patriots, Raiders and 49ers are among the most popular.

“I came a few years ago for the Raiders game and you could feel the excitement, and I believe that it keeps growing,” said Anthony Muñoz, a Hall of Fame former offensive lineman for the Cincinnati Bengals.

“A lot of people think of Mexico and think that they just love the other ‘football,’ but it’s not like that,” said Muñoz, who has Mexican heritage. “The fans here are really knowledgeable and understand the game. There’s a big fan base here.”

The NFL has promoted the sport for years in Mexican schools and estimates that about 3.3 million children play on more than 6,000 junior teams in 27 of the country’s 32 states.

Football historian Alejandro Morales, founder of Mexico’s football Hall of Fame, said the game arrived in the country in 1896 via Mexicans who studied at U.S. universities and brought their appreciation back home. Mexico’s first football game took place that year in the city of Jalapa between local students and a team made up of U.S. Marines who were passing through the port city of Veracruz.

Mexico has two college football leagues with nearly 40 teams between them. Last weekend’s championship between Burros Blancos and Aguilas Blancas — “white donkeys” and “white eagles,” respectively — overflowed the 36,000-capacity stadium at the capital’s Sports City complex and was broadcast on national television.

“A stadium with 35,000 people to watch a student sport event is something incredible,” said quarterback Rodrigo García of the victorious Burros Blancos. “That tells you something about the passion for this sport in Mexico.”