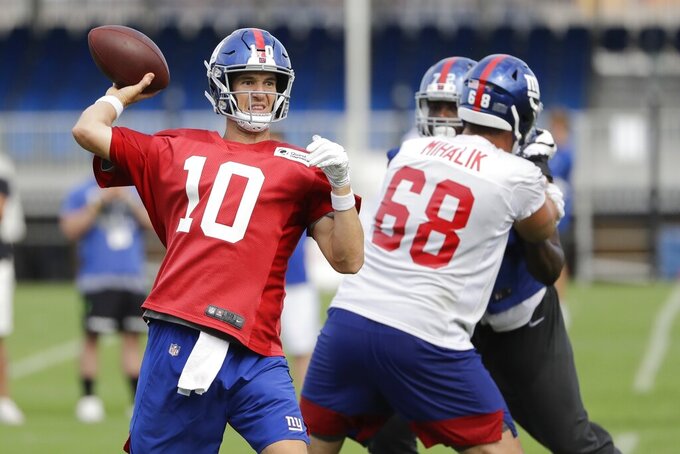 Hunter looks as if he has been on a camping trip and left his razor home. He doesn't intend to change the look anytime soon.

"Every minute is valuable, so I'm trying to use every minute they're asleep to get something done," Hunter said Thursday before a practice a week prior to the preseason opener against the Jets, their co-tenant at MetLife Stadium.

Hunter is facing a big job this year working with a line that has more talent than a year ago, but one that needs to mesh.

Jon Halapio, who missed most of last season after breaking an ankle and lower leg in the second game, is back and competing with Spencer Pulley for the center job.

The right side is new but very experienced. Kevin Zeitler, who was acquired in a trade with Cleveland, is at right guard. The eight-year veteran has 10-year veteran Mike Remmers on his right.

"I just think there's a more serious focus, I would say more of an old-school approach, and that's what those players bring," Hunter said. "We've got some good young players coming up, so there's a little bit of competition in there. There's a real focused, determined, work ethic going on right now."

If the offense is going to succeed, the line has to step up and play a lot better than last season.

The pass protection in 2018 was horrible. The line allowed Eli Manning and the quarterbacks to be sacked 47 times.

While Saquon Barkley ran for 1,307 yards and 11 touchdowns, New York was among the worst in the league running plays for losses.

"We want to be good," Zeitler said. "We owe it. The O-line owes it to Eli and Saquon to make them the best they can be, and they make us the best we can be."

There are injuries that need to be overcome. Remmers had back surgery in the offseason and Halapio spent almost a year rehabbing. Halapio says he is ready. He was sore after the first pads practice but he has no concern about his right leg.

Looking around the O-line room, he sees a mature group of proven veterans who are working to become a unit.

Hunter said the line needs to find continuity, whoever plays.

It was missing in 2018, just like Hunter's razor in training camp these days.

NOTES: Second-year CB Grant Haley appeared to hurt his right arm breaking up a pass in practice. ... Referee Shawn Hochuli, four other NFL officials and three members of the NFL's development group worked practice. They talked to the players Thursday night. ... No fans were allowed to watch the workout because of a Rolling Stones' concert at MetLife Stadium on Thursday night.