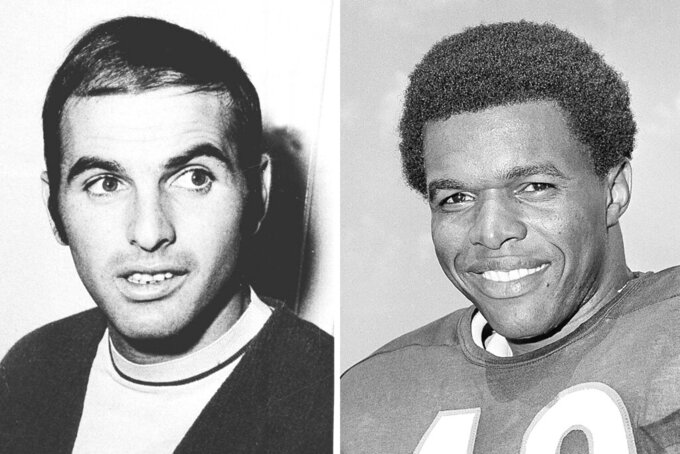 When Chicago Bears teammates Gale Sayers and Brian Piccolo became roommates in 1967, the first time NFL players of different colors shared accommodations on the road, it hardly looked like a good fit.

Sayers, 24 at the time, was already an established star, a soft-spoken Black man who generally raised his voice only when matters of social justice were discussed. Piccolo, the same age, was white, an inveterate talker and joker who was competing with Sayers for playing time in the backfield after being undrafted and clambering from the taxi squad onto the game-day roster.

But the enduring friendship that formed between the two became the subject of “Brian’s Song,” a 1971 made-for-TV movie that remains one of the most popular sports movies of all time. It rarely resonated more than it did Wednesday, following the announcement of Sayers’ death at age 77.

“It just amazes me,” Joy Piccolo O’Connell said in an interview from her Wisconsin home. “It was 50 years ago."

The two grew close in 1968, when Piccolo unselfishly supported Sayers’ attempt to come back from the first of several knee injuries that eventually shortened his career. When Piccolo received a diagnosis of late-stage testicular cancer the following year, Sayers unfailingly remained by his side.

Piccolo lost his battle with the disease in 1970, less than a month after Sayers received the league’s George S. Halas Courage Award and gave the speech that became the centerpiece of the film:

“He has the heart of a giant and that rare form of courage that allows him to kid himself and his opponent — cancer,” Sayers said at the awards dinner, a scene reprised in the ABC movie by actor Billy Dee Williams.

“He has the mental attitude that makes me proud to have a friend who spells out the word ‘courage’ 24 hours a day, every day of his life. You flatter me by giving me this award, but I tell you that I accept it for Brian Piccolo. It is mine tonight, it is Brian Piccolo’s tomorrow. … I love Brian Piccolo, and I’d like all of you to love him too. Tonight, when you hit your knees,” Sayers concluded, “please ask God to love him.”

Williams tweeted Wednesday that “my heart is broken over the loss of my dear friend, Gale Sayers. Portraying Gale in Brian’s Song was a true honor and one of the nightlights of my career. He was an extraordinary human being with the the kindest heart.”

In 1967, hotel-room assignments were generally done by position and running back was the only slot on the Bears team where players of different colors would be thrown together. But then-general manager Ed McCaskey, a Halas family member who was running the club, gave the move his blessing — and with good reason.

As a senior at Wake Forest, in a 1963 game against Maryland, Piccolo walked to the Terrapins sideline and brought Maryland running back Darryl Hill — the only Black player in the league at the time — with him to the front of the student section. Then he threw an arm across Hill’s shoulders, silencing the crowd.

But Joy Piccolo O’Connell, who has remarried, thinks the biggest obstacle to the friendship between Piccolo and Sayers had to more to do with personality than color.

“Brian loved being with people, loved to talk and couldn’t do enough public speaking,” she said, “and Gale was so extremely quiet.”

Indeed, Sayers said in a 2001 interview that Piccolo’s constant joking put him off at first. Piccolo, likewise, told biographer Jeannie Morris that he thought Sayers was “arrogant … I didn’t see him speak to a soul the whole week we were together.”

From that rocky beginning, Sayers and Piccolo forged a bond strong enough to weather injury and illness and push back against the lazy assumption that men of different colors, from different backgrounds, couldn’t care about — and for — each other like brothers.

“They showed the movie the other night,” Piccolo O’Connell said, “and we’ll get inquiries through the (Piccolo) foundation …

“But it’s amazing,” she concluded “how the story continues and continues.”

AP Writer Don Babwin in Chicago contributed to this report.