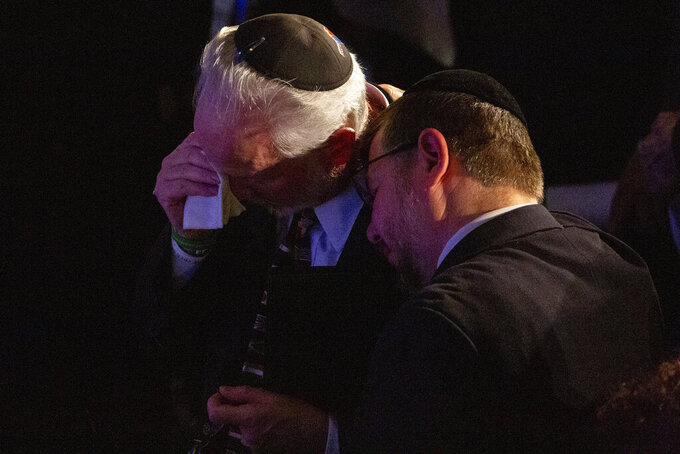 Rabbi Jeffrey Myers, center, of the Tree of Life/Or L'Simcha Congregation, is comforted after saying a prayer for the souls of the deceased during the one-year commemoration of the Tree of Life synagogue attack, at Soldiers & Sailors Memorial Hall and Museum, Sunday, Oct. 27, 2019, in Pittsburgh. (AP Photo/Rebecca Droke)

PITTSBURGH (AP) — The Pittsburgh Steelers have held a moment of silence to commemorate the first anniversary of the deadliest attack on Jews in U.S. history.

Team President Art Rooney II said that Monday night's remembrance before the start of the Pittsburgh-Miami game was in honor of the victims and their families.

The shooting at Pittsburgh's Tree of Life synagogue on Oct. 27, 2018, killed 11 worshippers and wounded seven others.

Several family members of Tree of Life victims stood on the sideline with the Steelers during the pregame ceremony.

Tree of Life leaders unveiled their vision for the damaged building earlier this month, including a rebuilt space for places of worship, a memorial, and classrooms and exhibitions.