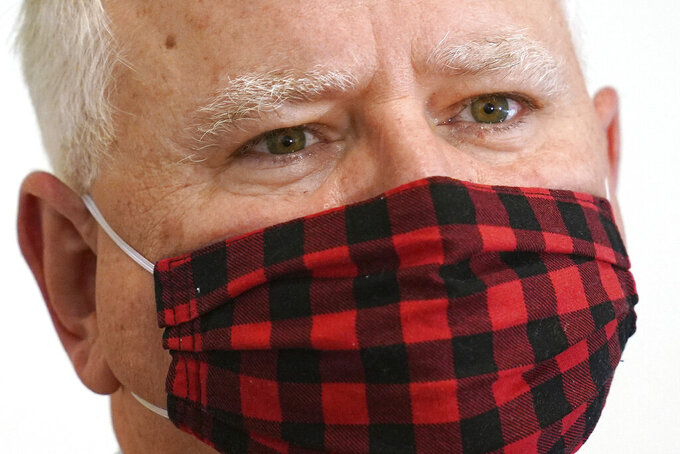 MINNEAPOLIS (AP) — The Minnesota Vikings have given up on trying to host larger crowds and said Wednesday that the team will no longer seek permission to sell tickets to fans for their remaining home games, as the state blew past its daily record for new deaths.

The Vikings said in a statement that while players, coaches and staff have missed the energy and passion that fans bring on game day, the team would no longer seek approval to host more than 250 fans for the remaining games at U.S. Bank Stadium, the state-mandated maximum crowd size for indoor gatherings. The team had been talking all year with stadium, state and city officials about devising a way to safely and responsibly open the gates.

“While we have worked hard to develop a safe and responsible plan to bring back a limited number of fans, our decisions have been based on medical guidance with public health as the top priority," the team said. “We take seriously Minnesota’s rising COVID infection rates and increasing hospitalizations and believe closing the final four home games to fans is the right decision to help protect our community.”

The stands were empty for the Vikings’ first game of the season. The last three home games had 250 or fewer invited family members of players and staff in the lower bowl. They will still be welcomed.

The Minnesota Department of Health Minnesota on Wednesday reported a record 56 new deaths from COVID-19 and 4,900 new coronavirus cases, raising the state's death toll to 2,754 and its total case count to 194,570. The daily death toll represented a more than 55% jump from Minnesota’s previous record of 36 deaths, reported on Friday.

The seven-day rolling average of the positivity rate in Minnesota — an important measure of how fast the virus is spreading — has nearly doubled over the past two weeks from just under 7% on Oct. 27 to nearly 13% on Tuesday, according to data from The COVID Tracking Project.

“This is just inevitable. If we do not change our behaviors and take some mitigation efforts, this will continue to spike.” Gov. Tim Walz told Minnesota Public Radio earlier Wednesday as he previewed the new figures.

A day earlier, Walz warned Minnesotans that the state was approaching the worst phase of the pandemic and that conditions would get dramatically worse unless people start changing their behavior. He announced new restrictions aimed at slowing the accelerating spread of the coronavirus. Bars and restaurants must stop serving at 10 p.m., but can still offer takeout and delivery, and attendance at weddings, funerals and social gatherings will be limited. Those new restrictions will start to take effect Friday.