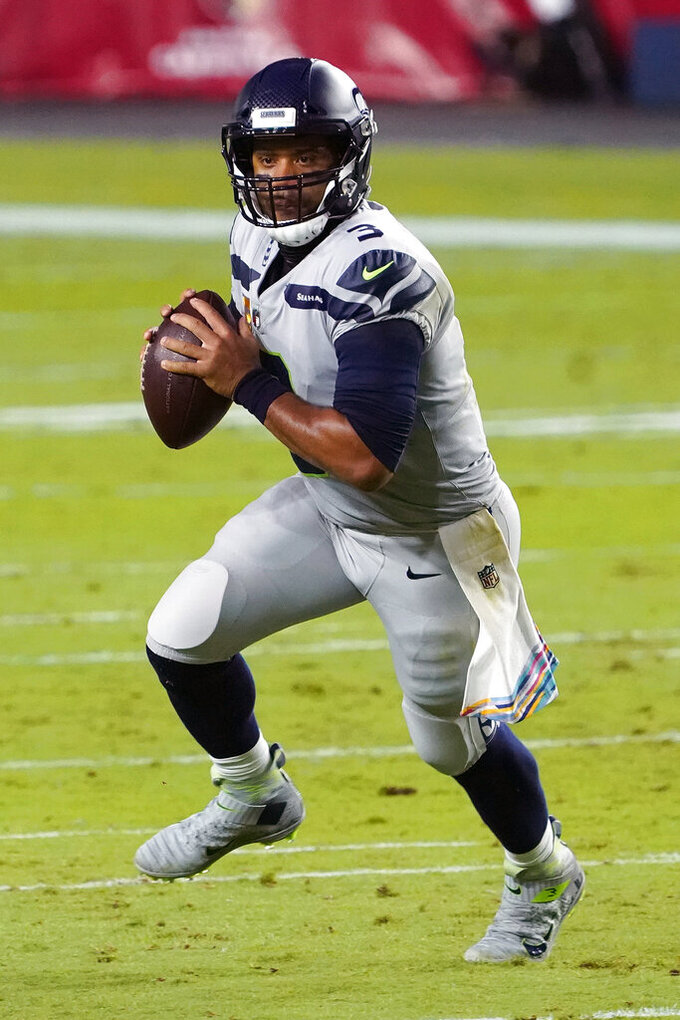 Seattle Seahawks quarterback Russell Wilson (3) looks to throw against the Arizona Cardinals during the first half of an NFL football game, Sunday, Oct. 25, 2020, in Glendale, Ariz. With the NFC East a total mess, the conference's West Division is so strong that three teams, possibly all four, figure to challenge for the playoffs. (AP Photo/Rick Scuteri)

The race for the No. 1 seed in the NFC is wide open. The only certainty is the conference leader won’t come from the East.

The Saints seem to have the best shot at this point. They’re riding a five-game winning streak and coming off a 38-3 beatdown of Tom Brady and the Buccaneers.

“This is a funny league. Things can go well, and we know week to week how fortunes can change,” Saints coach Sean Payton said. “Obviously, one of our better games as a team. We’ll enjoy it and then get ready to work.”

New Orleans has only one game left against an opponent that currently has a winning record. The other six-win teams have shown more holes.

The Packers have lost two of their past four games, including a 38-10 rout at Tampa in Week 6. The Seahawks have allowed 81 points in two losses over the past three games. The Bucs were crushed by the Saints at home.

The top seed matters more now because only one team gets a bye under the league’s new playoff format. But that may not happen if any games are canceled because of COVID-19. Owners voted Tuesday to expand the playoffs to 16 teams with no byes if meaningful games can’t be played because of the coronavirus.

Philadelphia leads the East at 3-4-1 and is likely to become the third team with a losing record to win a division since 2010.

EAST: The Eagles are a clear front-runner in the NFL’s worst division ahead of Washington (2-6), Dallas (2-7) and the New York Giants (2-7). Philadelphia has a difficult schedule in the second half, facing non-division opponents currently 28-12. But the Eagles probably won’t need more than six wins to finish first. Injuries have forced Philly to use 21 different starters on offense. Only quarterback Carson Wentz and center Jason Kelce have played every game. Wentz has struggled with consistency. He has 16 turnovers, including 12 interceptions.

The Cowboys have also been hurt by injuries, losing Dak Prescott and tackles Tyron Smith and La’el Collins for the season.

Washington is turning to Alex Smith after backup quarterback Kyle Allen went down for the season. Dwayne Haskins already was benched in Week 5.

The Giants have improved under first-year coach Joe Judge. They nearly beat Philadelphia and Tampa before defeating Washington last week.

NORTH: Aaron Rodgers is off to one of the best starts of his career and the Packers haven’t lost consecutive games since coach Matt LaFleur took over in 2019. The Packers are averaging 31.6 points per game. If the defense holds up, Green Bay could go deep into the postseason.

The Bears switched quarterbacks, handing the job to Super Bowl 52 MVP Nick Foles. But the offense has been stagnant and they’ve lost three in a row.

Minnesota (3-5) and Detroit (3-5) are among the teams that will be jockeying for draft positioning.

SOUTH: The Saints proved they’re still the class of the division with a dominant win over the Buccaneers. The offense led by Drew Brees remains potent and the No. 3 defense gives the team a shot to play another game in Tampa — the Super Bowl.

Brady has the Bucs off to their best start since 2002, when they won 12 of their first 14 and went on to win their only Super Bowl title. But questions arose after Brady suffered the most lopsided loss of his career. Antonio Brown’s first game was a dud. However, Brady has enough talent around him that perhaps he just needs more time to build more chemistry.

WEST: This is easily the best division in the league. The Seahawks have a powerful offense capable of carrying the team. Russell Wilson, despite seven turnovers in the two losses, is an MVP candidate. But the defense is allowing the most yards and third-most points in the NFL.

Kyler Murray and DeAndre Hopkins have turned the Cardinals into one of the most consistent offenses in the NFL, putting Arizona ahead of schedule in its rebuild. The defense has to play better to give the Cardinals a real shot in January.

Here’s a switch. The Rams are relying more on defense than Sean McVay’s offense. Los Angeles has the No. 2 defense in the league while Jared Goff and the offense are 21st in scoring.