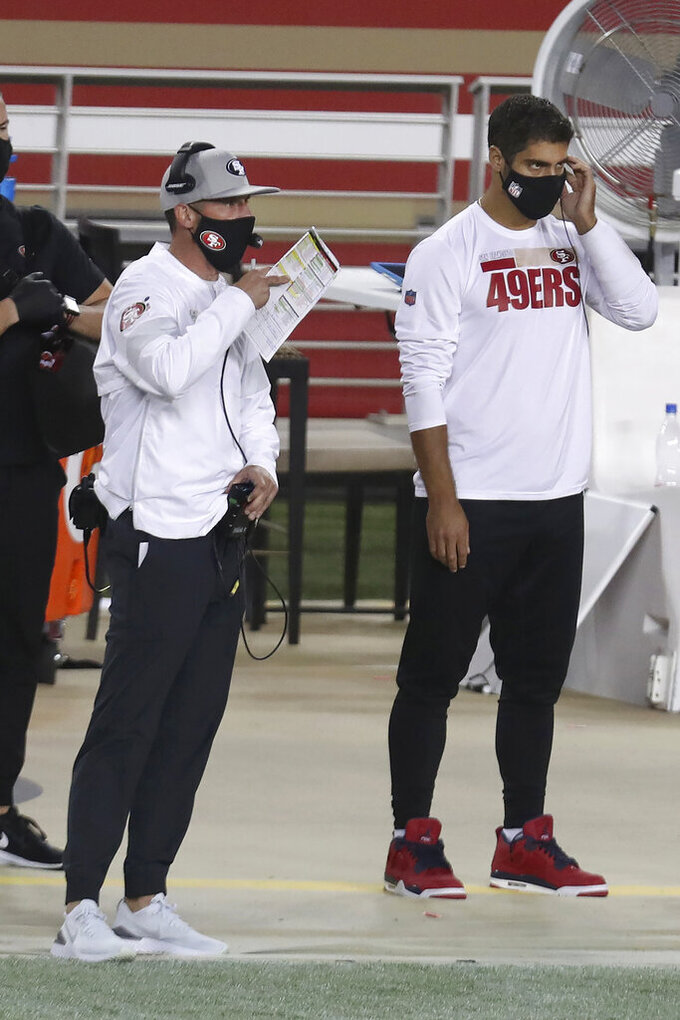 San Francisco 49ers head coach Kyle Shanahan, left, stands on the sideline next to injured quarterback Jimmy Garoppolo during the second half of an NFL football game against the Philadelphia Eagles in Santa Clara, Calif., Sunday, Oct. 4, 2020. (AP Photo/Jed Jacobsohn)

SANTA CLARA, Calif. (AP) — A night of sleep did nothing to ease the frustration San Francisco coach Kyle Shanahan felt after the 49ers let another home game get away from them.

Three turnovers by backup quarterback Nick Mullens, shaky offensive line play and a defense that couldn’t come up with a late stop when needed added up to a 25-20 loss to the Philadelphia Eagles on Sunday night.

“I think we had every opportunity to win that game, especially early in the game and then even late in the game,” Shanahan said. “I think our team felt that way in the locker room. I think we all felt that way probably sitting in our beds last night replaying the game throughout our own heads. I think we feel even stronger that way when you sit and watch the tape.”

Mullens threw an interception in the red zone to deny San Francisco (2-2) a scoring chance in the first half, then lost a fumble that set up Philadelphia’s go-ahead score in the fourth quarter before throwing a pick-6 that helped seal the loss.

The defense allowed Carson Wentz to scramble for 37 yards and a TD and connect on the go-ahead 42-yard TD pass to Travis Fulgham, who entered the game with no career catches.

“You can’t have those games back,” Shanahan said. “It goes on your record that way. That’s always frustrating. You have to deal with it today. It’ll probably be on our minds tomorrow, but when they come in Wednesday, the only way to fix that is to do better next week.”

The Niners hope to have Jimmy Garoppolo back as starting quarterback after his missed the past two games with a sprained ankle.

Mullens played well in the first start but struggled mightily against the Eagles, turning questions about whether he could supplant Garoppolo as starter into whether C.J. Beathard had moved past him as the No. 2 after going 14 for 19 for 138 yards in relief of Mullens.

Shanahan is hopeful Garoppolo can return this week, but won’t know more until Wednesday when the team begins practicing for the game Sunday against Miami.

George Kittle. After missing the past two games with a knee injury, All-Pro tight end Kittle made an impressive return. He was targeted 15 times in the passing game, catching all 15 for 183 yards and a touchdown. Kittle is the fourth wide receiver or tight end since 2009 to be targeted at least 12 times and catch every pass. The others are Michael Thomas, Larry Fitzgerald and Wes Welker.

Running backs. The Niners averaged an impressive 5.8 yards per carry but much of that came thanks to runs by receivers and tight ends. Brandon Aiyuk scored on a 38-yard lateral, while Deebo Samuel had a 10-yard run and Kittle had an 8-yarder. The backs were held to 60 yards on 17 carries. Jerick McKinnon got much of the load with 14 carries for only 54 yards. He did score a TD, becoming the first San Francisco player to score a touchdown in each of the first four games since Jerry Rice in 1991.

Arik Armstead. With the Niners missing three key defensive linemen with Nick Bosa, Dee Ford and Solomon Thomas all sidelined, Armstead had his best game of the year. He had a half-sack, six quarterback hits and a career-high eight quarterback pressures, according to Pro Football Focus.

LT Trent Williams. Williams had been perhaps the best offensive player for the 49ers the first three weeks, showing few signs of rust after sitting out last season. But he allowed four pressures and two sacks against the Eagles, according to Pro Football Focus. He was also called for holding and a false start.

DE Ezekiel Ansah will be placed on IR this week after a season-ending torn biceps injury. ... Slot CB K’Waun Williams will go on short-term IR with a sprained knee. ... Shanahan said there’s a chance RB Raheem Mostert (knee) and CB Richard Sherman (calf) will be back this week but he’s not optimistic.

17. Mullens was under heavy pressure all game as the entire line struggled, including the usually reliable tackles Williams and Mike McGlinchey. Mullens was pressured on 17 of his 31 dropbacks, according to Pro Football Focus, contributing to the poor performance.

The Niners host Miami on Sunday.