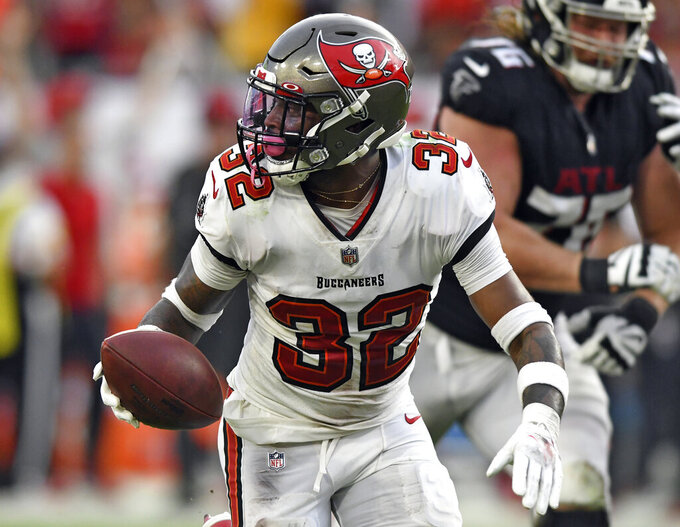 FILE - Tampa Bay Buccaneers safety Mike Edwards (32) looks back after intercepting a pass by Atlanta Falcons quarterback Matt Ryan and returning it for a touchdown during the second half of an NFL football game Sept. 19, 2021, in Tampa, Fla. Buccaneers' Antonio Brown and two other NFL players have been suspended immediately for three games by the league for violating COVID-19 protocols. Brown and teammate Edwards were suspended Thursday, Dec. 2, 2021. Free agent John Franklin III, if signed by a team, is also ineligible to play in the next three games. (AP Photo/Jason Behnken, File)

TAMPA, Fla. (AP) — Tampa Bay Buccaneers coach Bruce Arians would like to see the NFL expand an investigation of the COVID-19 vaccination status of two players on his team to include other rosters around the league.

Responding publicly for the first time to the league suspending wide receiver Antonio Brown and safety Mike Edwards for three games for misrepresenting their status with fake vaccination cards, Arians said Friday those may not be the only cases of their kind in the league.

“The league did their due diligence and we move on,” Arians said after practice. “I will not address these guys for the next three weeks. They’ll just be working out, and we’ll address their future at that time. Other than that, there’s really nothing to say.”

A third player, former Bucs receiver John Franklin III, also was suspended for three games. He was cut during training camp and currently is a free agent.

Arians said the reigning Super Bowl champions have done as good a job as any team managing the coronavirus pandemic the past two seasons.

He added the club fully cooperated with the league probe launched last month after a personal chef who once worked for Brown told the Tampa Bay Times that the receiver had obtained a fake vaccination card before reporting to training camp.

“This is a setback because of what happened, but we have done an amazing job. We haven’t had an outbreak in a position room, so I’m very happy with that part,” Arians said.

Asked if he thinks there may be issues with the vaccination status of other players around the league, the coach replied, “maybe.”

“It is what it is,” Arians said. “We’ve done everything. I mean, everything. There’s a lot more to that story. I just hope they don’t stop looking.”

Brown, who has missed the past five games with an ankle injury and likely was going to remain sidelined for the next two as well, loses a little over $181,000 during the suspension. The Bucs are 5-0 with him in the lineup this season, 3-3 without.

The discipline will cost Edwards, a backup who leads the team with three interceptions, about $141,000.

In addition to sitting out Sunday’s game at Atlanta, the pair will miss home games the following two weeks against Buffalo and New Orleans. Brown and Edwards will be eligible to return Dec. 26 against the Carolina Panthers.