Bears get their chance at payback against Packers, Rodgers 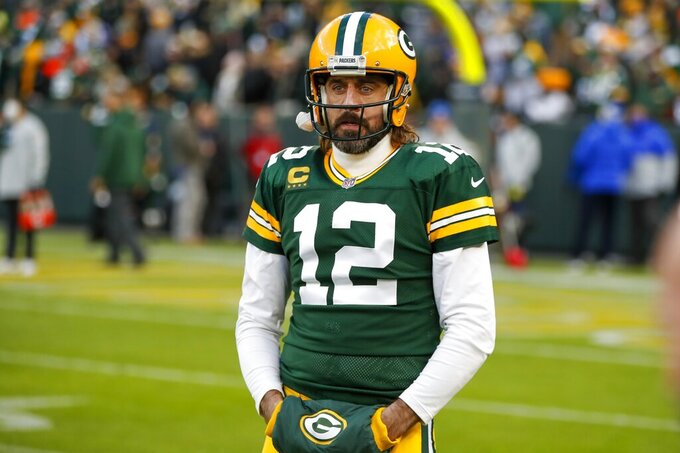 GREEN BAY, Wis. (AP) — Green Bay Packers quarterback Aaron Rodgers has dominated the Chicago Bears during his Hall of Fame-caliber career and isn’t shy about pointing that out.

After running for a fourth-quarter touchdown in a 24-14 victory at Chicago on Oct. 14, Rodgers shouted “I still own you!” to the Soldier Field crowd.

The Bears (4-8) get their shot at payback Sunday when they visit the NFC North-leading Packers (9-3) at Lambeau Field.

Rodgers noted this week that his comment wasn’t directed at the Bears, but rather at fans who were making obscene gestures to him. But he also pointed out that “I don’t know that you can question a whole lot of what I said.”

The Packers are 22-5 against the Bears in games Rodgers has started.

“In order to trash talk, you have to have a lot of confidence in what you accomplished and what you’re going to accomplish in the future,” Rodgers said. “At some point, what I said will be used against me, that’s just part of it. But I have no regrets for saying what I said and obviously I think the record kind of speaks for itself.”

The Bears already have enough incentive as they try to build some late-season momentum after losing six of their past seven games.

“We can’t control that’s how he feels,” Gipson said. “All that we can do is just go out there and control what we do Sunday night, and that’s our focus right now. I don’t think it was necessary to harp on what was said, man. Obviously we have other things to worry about, and winning a football game is the main priority right now.”

The Bears hope they get a boost from the return of rookie quarterback Justin Fields, who missed two games with broken ribs. Fields has thrown twice as many interceptions (eight) as touchdown passes (four) this season, but he had perhaps his two best games just before his injury.

While the Bears look toward their future with Fields, the Packers are driving toward their third straight NFC North title as the only division team with a winning record.

They want to close the regular season strong and enter the playoffs with momentum.

Rodgers has been playing through a toe injury that has reduced his practice time, though it hasn’t limited his effectiveness. Rodgers says he fractured his pinky toe last month while working out at home during his quarantine after testing positive for COVID-19.

He didn’t practice at all before a victory over the Los Angeles Rams and practiced just once before a loss at Minnesota the previous week. Rodgers said his toe benefited from the Packers’ bye week last week.

“It’s different, not the optimal way of doing things,” Rodgers said. “Obviously would love to be practicing and going through the process and the plan that way, but we’ve been making it work the last couple weeks with some pretty good performances.”

Both teams are lacking quarterback depth this week.

Packers backup Jordan Love is on the reserve/COVID-19 list. Chicago’s Andy Dalton, who started the Bears’ past two games, injured his left (non-throwing) hand in a loss to Arizona last week.

If Dalton is unavailable, Nick Foles would back up Fields.

A look at the turnover margin for each team helps explain why the Packers lead the NFC North while the Bears struggle.

The Packers have forced 19 takeaways and have turned the ball over just 10 times. The Bears have 19 turnovers and 11 takeaways.

Bears running back David Montgomery looked more like his usual self last week after initially struggling in his return from a knee injury.

He carried 21 times for 90 yards and a touchdown in a 33-22 loss to the Arizona Cardinals. He also had a season-high eight catches for 51 yards. In the three games prior to that since returning against Pittsburgh on Nov. 8, he averaged just 3.8 yards on 44 carries and had six catches for 54 yards.

Montgomery’s injury prevented him from playing when the Bears lost to the Packers in Chicago.