Bengals' draft: Shore up the blocking, toss in a backup QB 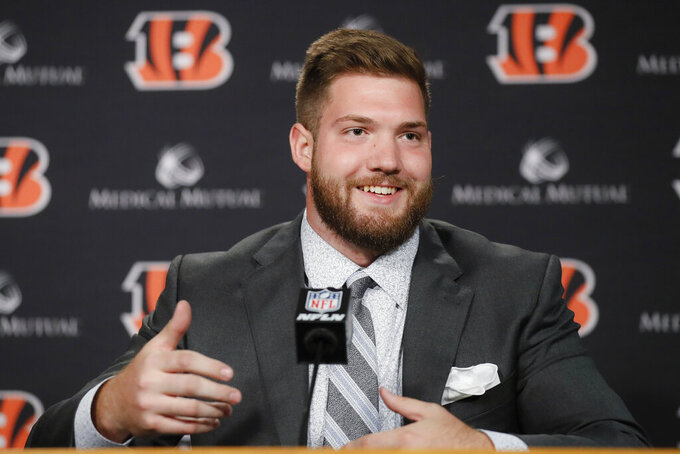 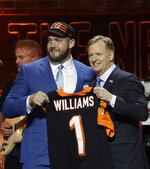 CINCINNATI (AP) — With the exception of a fourth-round quarterback, the Bengals' first draft under coach Zac Taylor was more about upgrading their infrastructure.

And there was a distinct emphasis on Taylor's favorite side of the ball.

The Bengals got two offensive linemen, a run-blocking tight end, a defensive tackle and a linebacker among their first six picks in the draft, with quarterback Ryan Finley filling out their top selections. Taylor came to the Bengals as the Rams' quarterback coach, and they leaned heavily toward improving the run game in his first draft.

Cincinnati finished 26th on offense last season and 21st in yards rushing. Joe Mixon led the AFC in rushing with 1,168 yards, but the running game was inconsistent overall. The Bengals took a pair of running backs in the sixth round to fill out the group.

"That's the starting point for us," Taylor said. "We're going to put a very strong focus on the run game and it all plays off that. If you can't get your run game going, the rest of the offense struggles."

For their most intriguing pick, the Bengals moved up and took Finley early in the fourth round Saturday, then immediately emphasized that Andy Dalton is still the starter.

Still, it was a noteworthy move. The Bengals hadn't taken a quarterback so high in the draft since they choose Dalton in the second round in 2011.

Finley will be a backup for now, at least. Dalton has two years left on his contract and has fully recovered from a thumb injury that sidelined him the last five games last season.

"I do want to make something very clear before we start: Andy Dalton is our starting quarterback," offensive coordinator Brian Callahan said. "That has not changed. That will not change. We think very highly of Andy and what he's going to do in our offense.

Some highlights of Cincinnati's draft:

Moving down 10 spots in the second round and taking Sample — a tight end known as a tenacious blocker — with so many needs on a defense that gave up the most yards and third-most points in the league last season. Taylor said the Bengals highly valued Sample's blocking ability and thought he'd be gone if they waited to draft him later. The Bengals already had tight ends Tyler Eifert and C.J. Uzomah.

"Drew fits what we do," Taylor said. "When he's there and you really like him, you've got to go get him."

The offensive line has been a longstanding problem, and they improved it with the addition of Williams and Jordan, who can play guard. Linebacker was their biggest problem area on a historically bad defense last season, and Cincinnati released Vontaze Burfict in the offseason. The Bengals are depending upon Pratt to play a big role right away.

Taylor's staff has to figure out how to configure the offensive line with the new additions. Williams played left tackle at Alabama, so they could consider moving left tackle Cordy Glenn to another spot. They also have to get Pratt ready. The versatile linebacker could play either inside or outside, and first-year coordinator Lou Anarumo needs to decide where he'll be most comfortable at the outset.