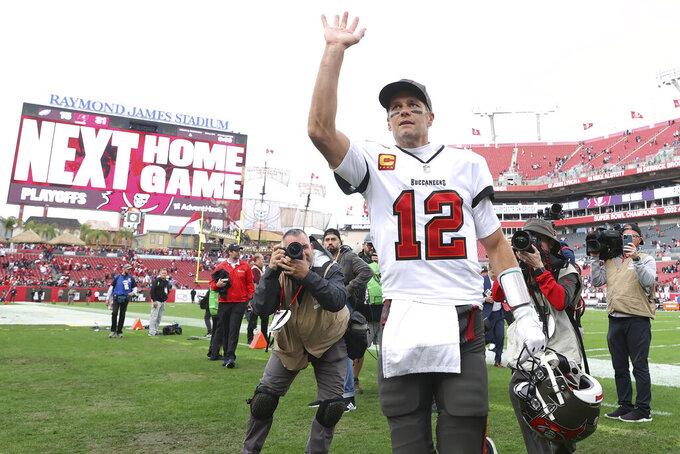 TAMPA, Fla. (AP) — The Tampa Bay Buccaneers are running out of superlatives to describe the impact of Tom Brady.

The defending Super Bowl champions improved to 5-0 in postseason games since the 44-year-old quarterback joined the Bucs in 2020, dominating the Philadelphia Eagles 31-15 in a NFC wild-card victory.

Brady didn’t have a monster game statistically, but that really wasn’t necessary with a re-energized defense benefiting from the return of several key players from injury, and the offense moving the ball effectively on the ground as well as through the air.

Getting linebackers Lavonte David, Shaquil Barrett and Jason Pierre-Paul back made a difference in building a 31-0 lead.

Receiver Mike Evans had nine receptions for 117 yards and one touchdown, while Brady continued to get timely contributions from some lesser-known players filling in for injured offensive playmakers Leonard Fournette, Ronald Jones and Chris Godwin.

“Just like I told them, I feel proud of all the ones who stepped in and stepped up,” coach Bruce Arians said.

“When you put a Bucs helmet on, there’s a level of expectation,” Arians added. “You don’t have to be the guy you replaced, you just have to be the best you and just play your best, and everybody that has had an opportunity has done that.”

Brady threw for 271 yards and two TDs without an interception in gusting winds, spreading 29 completions among nine targets.

The Bucs (14-4) won for the fourth straight time and have turned the ball over only once during the winning streak.

“I think everybody touching it — our runners, receivers — everybody’s very conscious of ball security,” Arians said. “Tom hasn’t come close to throwing one. It’s hard to beat us when we score points and don’t give it to the other team.”

Evans noted the impact of Brady, who extended his NFL record for postseason victories to 35, is immeasurable.

Brady threw for the third-most yards in NFL history during the regular season, yet by the time he threw the first of his two TD passes against the Eagles the Bucs were up 17-0. Second-year RB Ke’Shawn Vaughn stepped in during the absence of Fournette and Jones, setting the tone with a 17-yard run on the first play of the game and finishing with 53 yards and one TD rushing. RB Giovanni Bernard returned from a month-long stay on injured reserve, running for 44 yards and one TD and catching five passes for 39 yards.

With three first-time Pro Bowl selections, the offensive line has been one of the team’s most consistent components of success. If All-Pro tackle Tristan Wirfs (ankle) isn’t able to play next Sunday, backup Josh Wells— himself dealing with a quad injury — is going to have to play better than he did in relief against the Eagles.

The defense was energized by the return of LBs David, Barrett and Pierre-Paul, even though they only combined for two tackles and Barrett’s highlight-reel interception that set up Brady’s third-quarter TD pass to Evans.

“I feel like everything is slowly coming back together,” cornerback Jamel Dean said. “I feel like the energy was there that we have been missing for the second half of the season. But it is starting to come back.”

No team was better than Tampa Bay protecting the quarterback this season, allowing a league-low 23 sacks in 17 games. With Wirfs hobbled and sidelined most of the day, Brady was sacked four times by the Eagles.

Wirfs, who had played every offensive snap this season, was injured on the fifth play against the Eagles. He returned for three plays in the second quarter, exiting for the remainder of the day after yielding a sack. Pro Bowl center Ryan Jensen also limped off at one point, but finished the game. Arians said by Friday he’ll have a better idea about their availability for the next game. Fournette (hamstring) remains on injured reserve and will be evaluated as the week progresses.

Tampa Bay will host and NFC divisional playoff game against the Los Angeles Rams on Sunday.