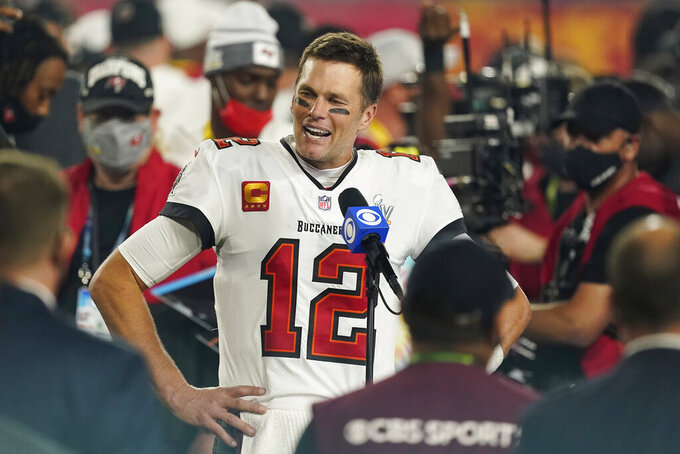 FILE - Tampa Bay Buccaneers quarterback Tom Brady (12) is interviewed on the field after the NFL Super Bowl 55 football game against the Kansas City Chiefs, in Tampa, Fla., in this Sunday, Feb. 7, 2021, file photo. Sometimes, the abdicating king, or the deposed one, returns to his kingdom. It happens often enough in the NFL, yet rarely is as newsworthy as Tom Brady, who led the Patriots to six Super Bowl titles, going back to New England. He'll do that on Sunday night eight months after taking the Tampa Bay Buccaneers to the top. (AP Photo/Steve Luciano, FIle)

Sometime in the first half Sunday night, Tom Brady should add another record to his already impressive haul of them.

It couldn't come in a more appropriate location.

With 68 yards passing in his return to New England, Brady will surpass Drew Brees' mark of 80,358 yards that stands as the most ever in the regular season.

Brady will add that to his long list of NFL records that already includes most TD passes (591), most wins as a starting quarterback (232), most Super Bowl titles (seven) and most conference championships (10).

No quarterback in NFL history has played more or produced more in a single venue than Brady has at Gillette Stadium. Since first appearing there when it opened in 2002, Brady has made 157 starts in the regular season and playoffs there, winning 134 of them while throwing for 41,285 yards and 304 TDs.

Those marks are all records, with Brees ranking second in yardage (38,192) and TDs (301) at the Superdome, Brett Favre standing at No. 2 in starts (130) at Lambeau Field and John Elway ranking second in wins (104) at Mile High Stadium.

Those are some of the many staggering numbers when it comes to Brady's success and longevity. His teams had a 232-70 record in his starts, making him more games over .500 than all QBs outside of Peyton Manning (186), Favre (186) and Brees (172) have total wins.

His longevity might be his most impressive trait, as he is still playing at a high level at age 44 after winning the Super Bowl in his first year in Tampa last season.

Brady's 11 TDs passing and rushing so far this season are tied with his most ever after three games, and his 1,087 yards rank fourth-most in his career.

Barring injury, Brady should, at some point later this season, throw enough TD passes to give him more in his 40s (155 so far including playoffs) than he had in his 20s (167).

In fact, Brady's 115 TDs in the regular season and playoffs since turning 41 are more than every other QB combined at that age.

Brady and Patriots coach Bill Belichick will be the seventh Super Bowl-winning coach and quarterback duo to face off after they went their separate ways, with the most recent coming in 2008 when Brad Johnson and the Cowboys beat Jon Gruden and Tampa Bay 13-9.

The winning QB is 4-2 in the first matchup with his old coach, with Joe Montana topping George Seifert, Jeff Hostetler beating Bill Parcells and Troy Aikman besting Jimmy Johnson for the other wins.

Favre lost his first start to Mike Holmgren, and Trent Dilfer lost his to Brian Billick.

Belichick will be the 109th coach that Brady has started a game against and he has won against 99 of them, led by 12 wins against Rex Ryan. He has lost to 47, with the most coming against Mike Shanahan (five).

For the second straight season, the New York Jets and Giants opened the season with three straight losses.

The skid extended to five games last year for the Giants and 13 for the Jets as part of a stretch of horrid New York football.

Since the start of the 2017 season, the Giants and Jets are tied for the worst record in the NFL, with 18-49 marks.

There are five remaining undefeated teams after Week 3 and only the Rams are coming off a playoff season.

Las Vegas, Denver, Carolina and Arizona have all won their first three games after missing out on the postseason in 2020.

Since the start of the eight-division format in 2002, this is just the third time that at least four teams started a season 3-0 after missing the playoffs the previous year. It also happened in 2013 with Miami, New Orleans, Kansas City and Chicago, and in 2003 with Denver, Carolina, Kansas City, Seattle and Minnesota.

Baltimore's Justin Tucker set the record for the longest field goal ever with his game-winning 66-yarder against Detroit. It was 2 yards longer than the previous mark set by Matt Prater for Denver in 2013.

That is one of 11 games so far this season in which the winning score has come in the final minute of regulation or in overtime, one shy of the NFL record through three weeks set in 2013.

Before Tucker's kick, Prater attempted an even longer one on Sunday but missed from 68 yards for Arizona on a kick that Jacksonville's Jamal Agnew returned 109 yards for a TD at the end of the first half. Prater made a 62-yarder in Week 2.