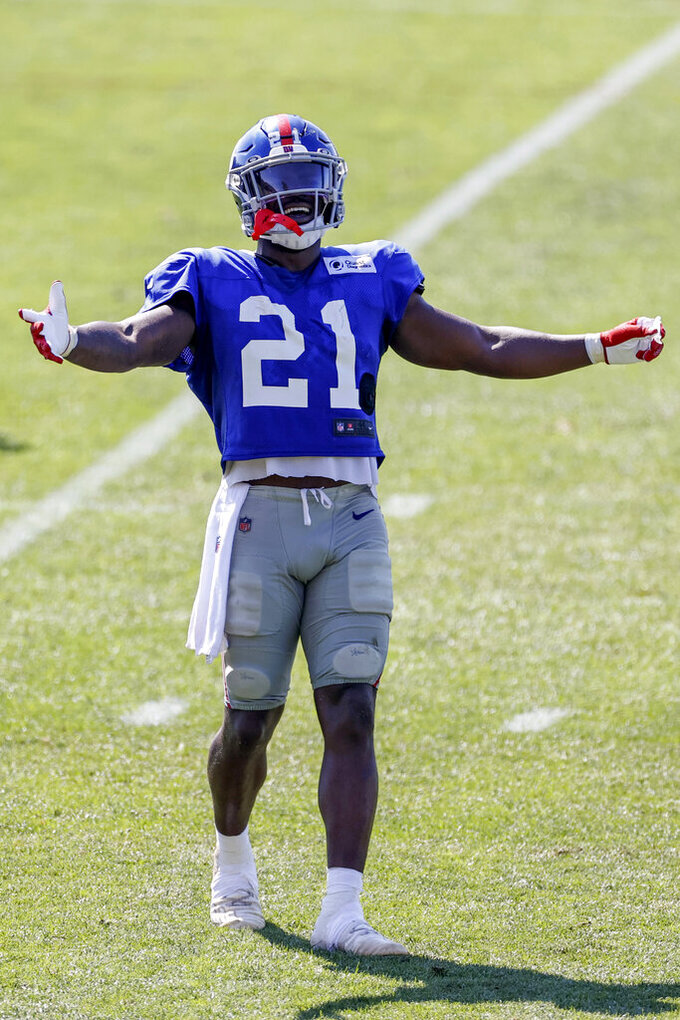 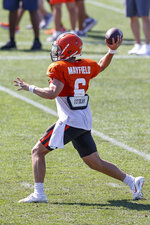 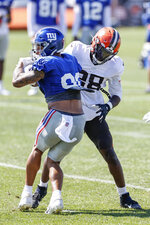 They didn't invite the Browns.

Tempers flared during the second joint practice between the teams, with Browns cornerback Troy Hill and Giants wide receiver Sterling Shepard squaring off and throwing punches at each other well after the session ended.

Hill and Shepard were part of a group of players mingling in the middle of the two practice fields following the tense, two-hour workout in humid weather conditions when they suddenly began swinging.

Shepard, who ducked under a wild punch from Hill, then pulled off his shirt as he walked away to do an interview with New York media members. He didn't mention the incident with Hill before boarding one of the team buses waiting nearby.

"That is news to me. Thank you for breaking that to me,” he said. "I'll review the tape.”

The two practices were a warm up to Sunday's exhibition game at FirstEnergy Stadium. Stefanski said quarterback Baker Mayfield will not play and that he intended to rest the majority of his starters for the second straight week.

New York coach Joe Judge planned to talk to Stefanski before deciding whether he'll play starting quarterback Daniel Jones and the other first-teamers.

Judge said he'll treat New York's exhibition at New England as more of a dress rehearsal for the season opener.

“I just want to make sure we keep our overall players’ loads in consideration going into it because it’ll also be a quick turnaround going from Cleveland,” Judge said. “Getting back home, training up to Boston and going against New England for a couple of days before playing the preseason game.”

Giants star running back Saquon Barkley did some drills against his teammates but was held out any action against the Browns. Judge said Barkley, who is working his way back from a devastating knee injury, will be evaluated following the week before potentially ramping up his activity.

Stefanski and Judge wanted their teams to get competitive on-field reps over the past two days, and that seemed to be the case. They warned their players about fighting, and for the most past there was mostly just some extra shoves and pushes after the whistle.

However, as the day wore on the intensity rose and things got really heated during a late red-zone session. At one point, Stefanski pulled defensive end Joe Jackson off the field and lectured him.

Moments later, Giants safety Jabrill Peppers, who was constantly chirping at Mayfield and his former Browns teammates over the two days, was yelling at Cleveland defensive end Malik Jackson, who had to be restrained.

That was enough for Stefanski and Judge to huddle their players to calm things down.

“Just wanted to make sure we finished it strong and finished it smart,” Stefanski said. "It was hotter today, obviously down in the red zone there is condensed space so the intensity was raised and that’s OK.

"It’s football. It’s a physical game and it’s an emotional game, but I was pleased with how the guys kept that in check.”

For the second straight day, the Browns had players leave with injuries.

Stefanski was waiting to speak with his medical staff on the severity of the injuries.

Harris was filling in for starting center JC Tretter, who did individual drills but was kept out of the team session.

NOTES: Stefanski said LB Jacob Phillips will undergo surgery after tearing a biceps during Thursday's practice. The team is hoping Phillips, who was expected to be in the linebacker rotation, will be back this season. ... The Browns sent a letter to their fans recommending they wear masks any time they're in an indoor setting at home game to get vaccinated for COVID-19. ... Justice was looking forward to some golf with his players. As for his swing. “Horrible,” he said. “Look, if golf was baseball I’d be in the Hall of Fame. Three out of the 10, I’m going to stroke it. Other than that, I’ll get nothing.” ... Browns rookie S Richard LeCounte III continues to impress, picking off a Giants pass.