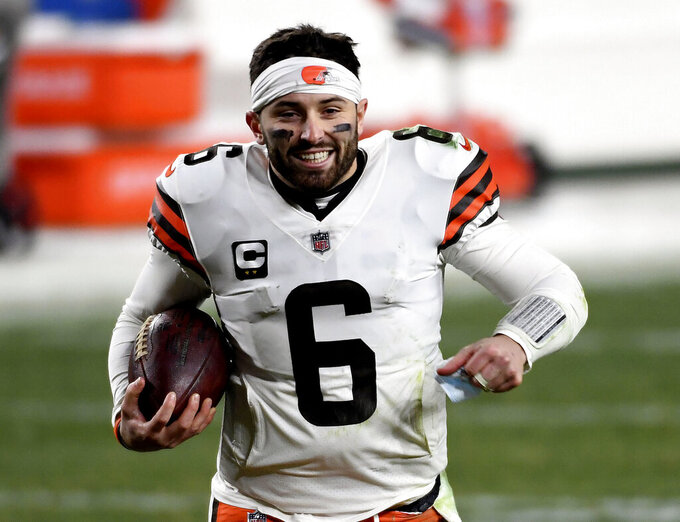 FILE - In this Jan. 10, 2021, file photo, Cleveland Browns quarterback Baker Mayfield runs off the field after defeating the Pittsburgh Steelers in an NFL wild-card playoff football game in Pittsburgh. Mayfield's offseason included running, lifting, getting a guaranteed $18 million and a celestial close encounter he will not forget. On his way home from dinner in Texas last month with his wife, Emily, Mayfield said he saw a UFO. (AP Photo/Justin Berl, File)

Mayfield said he saw a UFO. Nothing has changed his mind.

"I’m a firm believer in UFOs and Sasquatch,’′ Mayfield said with a smile Monday on a Zoom call with reporters. “It’s real. I saw it. I’m glad the Navy finally confirmed some more pictures. Now everybody doesn’t think I’m as crazy.

The Browns believe in Mayfield, which is why they exercised the fifth-year option on the quarterback's rookie contract last week, a decision that gives him at least two more years in Cleveland — an $18.8 million paycheck in 2022 — and could lead to a long-term extension.

Mayfield is now eligible for a longer deal, and the Browns are expected to offer one in the coming months to the 25-year-old after he led them to their first postseason appearance in 18 years last season and has them thinking Super Bowl.

“I’m truly thankful for them taking the chance, (General Manager) Andrew (Berry) and the Haslam family, for picking up that fifth-year option and making it one more year in Cleveland, extending this journey that we started three years ago today,” Mayfield said on a Zoom call. “I’ve been kind of thinking about that all day, so I’m very happy about that.

"In terms of long-term deals or all that, I’m taking it one day at a time. I’ve still got two seasons left on this full rookie contract now to see what happens.”

Until he's signed beyond 2022, Mayfield's future will remain a topic of conversation, but he's prepared to handle it.

“If we win games, everything will happen how it should,” he said. "That is my mentality, and I truly do believe that.”

Mayfield ended any doubt about his long-term future in Cleveland last season. He rebounded from a rough 2019 by throwing 30 touchdown passes and taking the Browns into the postseason, where they knocked off Pittsburgh in the wild-card round to snap a 17-game losing streak at Heinz Field.

Expectations are soaring in Cleveland for 2021, and Mayfield is quite certain he saw something else above him last month.

He and his wife, Emily, were headed home from dinner in Texas when they spotted “a very bright ball” in the sky. Mayfield posted his experience on Twitter soon after, and he's now more convinced that they weren't imagining something.

“Just driving back home and had the music going. It was one of those things (Emily) was looking down at her phone in the passenger seat,” he said. "It was nighttime so when you are looking at your phone screen, everything is dark around you and you can only see that light, but it was bright enough to where it caught her attention, too.

"We kind of just looked at each other, ‘Did you just see that? Yeah.’ Other people in that area confirmed, too.”