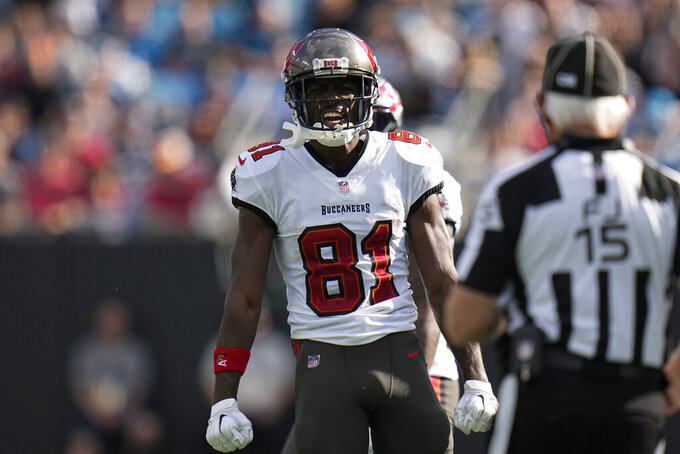 BETTING LINE: Buccaneers by 13, according to FanDuel SportsBook.

TURNOVER DIFFERENTIAL: Buccaneers plus-8; Jets minus-13.

BUCCANEERS PLAYER TO WATCH: WR Antonio Brown is back — and not without a tad of controversy surrounding him — after being sidelined by an ankle injury and serving a three-game suspension for misrepresenting his COVID-19 vaccination status. The 33-year-old Brown had 10 catches for 101 yards in last week’s NFC South title-clinching victory over Carolina. QB Tom Brady, who leads the NFL in passing yards and TDs, targeted Brown 15 times — one more than all the rest of his receivers combined.

KEY MATCHUP: Brady vs. Jets secondary. Tampa Bay has the No. 1 passing offense and, even without a few key receivers, will try to take advantage of a young and inexperienced New York secondary that had two new starters at safety last week and might be without top cornerback Bryce Hall (COVID-19 list).

KEY INJURIES: Coach Bruce Arians tested positive for the coronavirus early in the week, but the Bucs said he will coach the game. They also activated wide receiver Mike Evans and starting cornerbacks Jamel Dean and Sean Murphy-Bunting. ... LB Shaquil Barrett, who leads the reigning Super Bowl champions with 10 sacks, sprained a knee last week and is out for the remainder of the regular season. ... Jets WR Jamison Crowder missed last week's game with a calf injury and sat out practice early this week.

STATS AND STUFF: With Brady 44 and the Jets' Zach Wilson exactly 22 years younger - the two share an Aug. 3 birthday - it will mark the largest age gap between starting quarterbacks since at least 1950, according to NFL Research. ... Brady is completing his first full tour of the AFC East since leaving New England for Tampa Bay last season. He won 17 division titles in 20 years with the Patriots and has already beaten his old team, plus the Dolphins and Bills this season. ... The seven-time Super Bowl champion leads the NFL with 4,580 yards passing and 37 TDs. In 38 career starts against the Jets, during which he is 30-8, he has averaged 241.1 yards per game and thrown for 61 TDs. ... TE Rob Gronkowski faced the Jets 16 times while he was with New England, amassing 69 receptions for 883 yards and nine TDs. ... The Bucs' defense had seven sacks against the Panthers last week to boost its season total to 44, tied for second in the league with Minnesota. The unit hasn’t given up a touchdown the past two games, holding New Orleans to three field goals in a 9-0 loss to the Saints, limiting Carolina to two field goals in Tampa Bay’s 32-6 win last Sunday. ... The Jets ran for 273 yards, the most in the NFL this season, on 36 carries against Jacksonville. ... Wilson ran for 91 yards — including a 52-yard TD — on four carries against Jacksonville, setting franchise records for quarterbacks with both marks. He was also the first QB in NFL history to run for 90 or more yards on just four attempts or less. ... Wilson has no interceptions in his last three games. ... Backup OL Conor McDermott caught a 1-yard touchdown pass in the fourth quarter last week, the first TD catch by a Jets O-lineman since Jumbo Elliott’s grab in the “Monday Night Miracle” against Miami in 2000. ... After going 4 for 12 on third downs against Jacksonville, the Jets are 10 for 37 in their last three games. Their 27% conversion average in that span is better than only New England's 24.3%. ... WR Braxton Berrios had a 102-yard kickoff return for a touchdown last week, the Jets' first return for a score since Andre Roberts in 2018. ... LB C.J. Mosley has 10 or more tackles in four straight games, and has a career-high 142 total tackles this season. His nine games of 10 or more tackles are the most by a Jets player since Jonathan Vilma in 2005.

FANTASY TIP: With Buccaneers star receiver Chris Godwin out, Brown figures to have another busy afternoon. His 23 games with 10-plus catches are the most since he entered the league as a sixth-round draft pick in 2010. He ranks second over that stretch with 46 100-yard games.