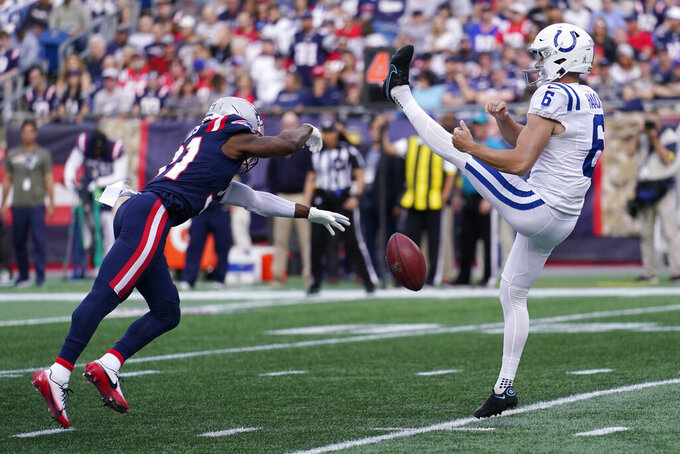 FOXBOROUGH, Mass. (AP) — After a week that featured another round of noticeable changes, Colts coach Frank Reich chose to point the finger at himself after Indianapolis failed to find the end zone in Sunday’s 26-3 loss to the New England Patriots.

“Starting with me, right? That’s what I said in the locker room. The offensive performance, that’s why I was brought here. That’s my responsibility,” Reich said. “We’ve got the players that are plenty good enough. I have to do a better job. It starts with me on offense. I need to do a better job getting the guys ready to play, putting guys in a good position to win and having answers when we face problems.”

For a team that fired offensive coordinator Marcus Brady, traded running back Nyheim Hines in the past week and isn’t far removed from benching opening day starting quarterback Matt Ryan, it's unclear what's next for the Colts.

Indianapolis has now dropped three straight. And at 3-5-1, the Colts are on the outside of the AFC playoff race.

Finding a fix for the offensive ineptitude that was on display on Sunday would be a good place to start. The Colts finished with a season-low 121 total yards and went 0 for 14 on third down. Six times, they went three-and-out.

"I certainly did not anticipate today. I really didn’t. I mean, I was really anticipating good things. I think we all were, but I think that’s why we’re wired like we’re wired. That’s why we do what we do because we believe,” Reich said.

The season-long problems related to pass protection continue to plague the Colts, who entered Week 9 ranked 30th in points per game.

A team that entered the season viewed as one of the contenders in the AFC was tormented by Matthew Judon and the New England defense.

“I understand that’s a big number. Was I putting them in the right position? Are we giving them the work that they need to be ready?” Reich said. “I’m not going to put it on the O-line. You know, I’ve been in games where we had nine sacks before as a player and as a coach and then you turn it around. So I’m going to believe we can figure that out.”

When he wasn’t getting slammed to the turf, Colts quarterback Sam Ehlinger was largely ineffective.

Making his second straight start following the demotion of Ryan, Ehlinger was 15 of 29 for 103 yards. New England’s final touchdown came off an interception by Ehlinger that cornerback Jonathan Jones returned 17 yards for the score.

After back-to-back weeks of significant changes, it bears watching what's next in Reich’s quest to prevent the season from further slipping away.

“We’re nine games into it. It’s not been pretty, but it’s hard right when you’re in the middle (of the season) to give any big self-evaluation,” Reich said. “Ultimately, I’m the head coach. We have higher expectations than where we’re at right now. I don’t want to stand up here and say, ‘Hey we can do it.’ We can and I’ve seen it done, but I’m not worried about that. I’m worried about doing my job better which means trying to get this team ready.”