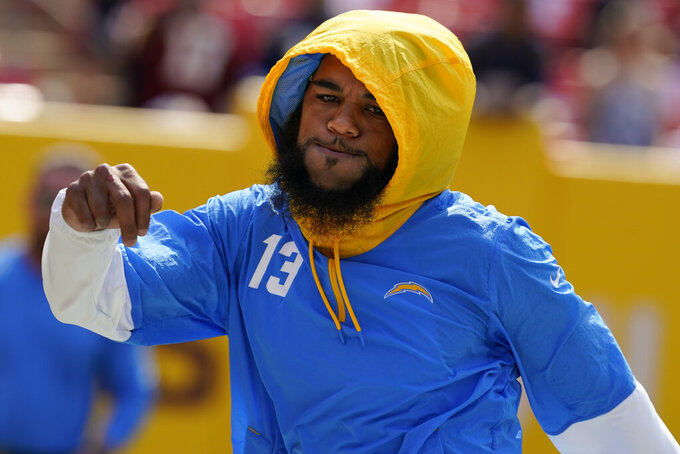 Los Angeles Chargers wide receiver Keenan Allen (13) during pregame warmups prior to the start of the first half of an NFL football game against the Washington Football Team, Sunday, Sept. 12, 2021, in Landover, Md. (AP Photo/Alex Brandon)

COSTA MESA, Calif. (AP) — Chargers wide receiver Keenan Allen isn’t going to be surprised with any of the defensive schemes the Las Vegas Raiders run on Monday night. That’s because he saw them every day for four years.

Perryman spent six seasons with the Bolts but did not re-sign during free agency. Hayward was released during the offseason after five years, while Bradley was the coordinator under coach Anthony Lynn from 2017-20.

“Going against all those guys from back in the day — remembering it, seeing it — it still looks the same,” Allen said about Bradley's scheme. “We know how it’s run; we know the way it’s supposed to be run. That gives us many advantages. Hopefully, Herbie (QB Justin Herbert) is the one to see it. Hopefully, we can get into the zones, get to where we need to.”

While Mike Williams has emerged as the Chargers' top receiving threat, Allen continues to put up reliable numbers. He is fifth in the AFC with 21 catches for 258 yards.

Led by first-year coach Brandon Staley and offensive coordinator Joe Lombardi, the Chargers are passing 65.2% of the time on offense, the fifth-highest rate in the league.

Allen said he's enjoying Lombardi's system because the Chargers can thrive even when he is fighting through double coverage.

“Everybody gets a chance to eat. Everybody gets the ball,” said Allen, who has been limited by an ankle injury in practice but will play Monday. “It’s tough to guard because you don’t know who to double. Obviously, I’m going to get the double, but you don’t know if I’m really going to get the ball. Mike’s getting third-down catches and touchdowns. J.G. (Jalen Guyton) is catching third-down routes. It’s tough to guard like that.”

“I do expect a few wrinkles, specifically, maybe, on third down,” Lombardi said. “This defense has been around for a long time; it has been proven. I don’t think that they’re ever really trying to trick you. They’re just trying to out-execute you.”

Bradley said he has considered changing up some of his defensive calls since Allen and others are familiar with the language he uses.

“We’re well aware of that and understand the game within the game that’s being played as well,” Bradley said. “Keenan’s not only just a good route runner, a really good receiver, but he’s very intelligent, and he understands coverages and where they want to go with the ball and what he needs to do.”

NOTES: The Chargers signed defensive lineman Joe Gaziano to the roster after they waived Eric Banks on Wednesday. Gaziano was on the practice squad, but had been called up to the gameday roster the past two weeks. ... Safeties Derwin James Jr. (shoulder) and Alohi Gilman (hip) were full participants in practice after being limited on Thursday. ... Long snapper Matt Overton was limited in practice with a calf issue.