Chargers frustrated after third straight loss has them 2-7 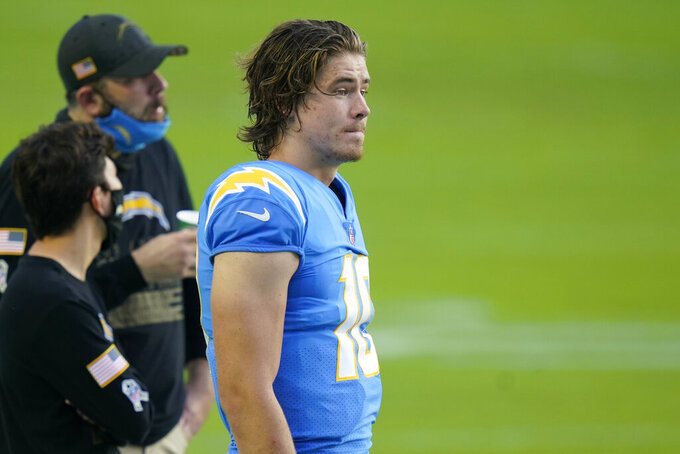 Los Angeles Chargers quarterback Justin Herbert (10) stands on the sidelines, during the first half of an NFL football game against the Miami Dolphins, Sunday, Nov. 15, 2020, in Miami Gardens, Fla. (AP Photo/Lynne Sladky)

When it comes to the different stages of a bad football team, anger and denial have replaced frustration for the Los Angeles Chargers, who are in the midst of the fourth 2-7 start in franchise history.

“I’m just mad because we’re a much better team than 2-7. We're not capitalizing on our opportunities,” cornerback Michael Davis said after Sunday's 29-21 loss to the Miami Dolphins.

The Chargers experienced the ultimate in frustration during the first half of the season when five of their six losses come down to the final play. But against the Dolphins, it was all but over in the fourth quarter as Los Angeles was dominated in all three phases.

The offense was confused by the Dolphins different defensive looks, the defense was worn down by a Miami running game that came into the game 28th in the league and the special teams had numerous gaffes on all units.

For wide receiver Keenan Allen, who has seen plenty of peaks and valleys during his eight seasons with the franchise, it is another common scenario that seems to play on a never-ending loop.

“Pretty much the last eight years, we lose a lot of close games. When we do have the lead we still lose. So we've got to find a way to get out of that,” he said. “Obviously we got a lot of talent. A lot of pieces. We got a lot of injuries as well, too. You know, a lot of our guys get injured. year in year out.”

Justin Herbert had another strong game facing a blitz, completing 9 of 14 for 121 yards and two TDs. The rookie is completing 60% of his passes and has a 124.2 passer rating this season against the blitz, which is third in the league.

The entire special teams unit. The breakdowns included four penalties, Ty Long having a punt blocked for the second time in four weeks, KJ Hill letting a punt roll to the LA 7 instead of fielding it near the 20 and Miami's Jakeem Grant averaging 19 yards per punt return. Chargers special teams lead the league with 14 penalties after committing 15 last season.

Kalen Ballage has emerged as the top running back with Austin Ekeler and Justin Jackson on injured reserve. Ballage had 18 carries for 58 yards against the Dolphins, where he spent two seasons.

Kenneth Murray has struggled in pass coverage the past two games. The rookie linebacker, whom the Chargers traded up to acquire in the first round, had an interception sail through his hands and into the arms of Adam Shaheen for a 19-yard catch during the third quarter that later led to a Dolphins' field goal.

DE Joey Bosa has missed two straight games because of a concussion. Ekeler (hamstring) and CB Chris Harris Jr. (foot) are making progress, but there is no timetable on when they can come off injured reserve.

The Chargers return home to face the winless New York Jets (0-9), who are coming off a bye week. The Bolts have won their past three meetings against Gang Green.