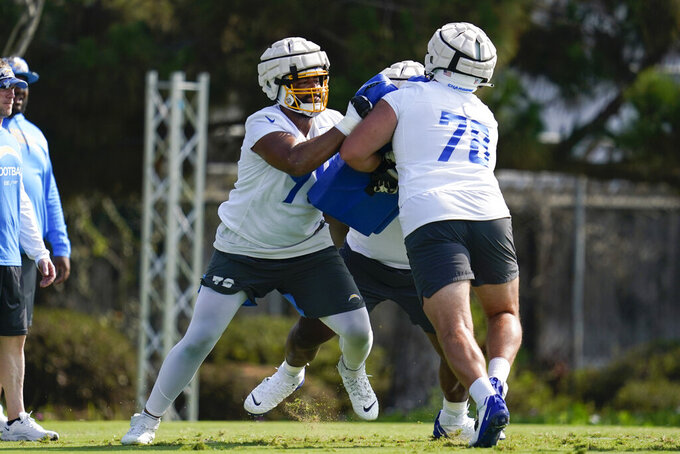 COSTA MESA, Calif. (AP) — Brandon Staley acknowledged the Los Angeles Chargers still have plenty of work to do before shifting their focus to the regular season.

“We’re going to have to make some decisions here next week,” Staley said. “That’s why these next three practices, for us, we’re going to really try and take advantage of them, that way, we can make the decisions next week that we need to make.”

Choosing between Storm Norton or Trey Pipkins III to start at right tackle might be the most notable question still facing Staley going into his second season as head coach.

“I think that we’re getting close to being able to make a decision on that,” Staley said. “It’s been a really good competition. No matter how it shakes out, it’s going to be good for our football team.”

The usage of Norton and Pipkins in the second preseason game, a 32-18 loss to the Dallas Cowboys on Saturday, seemed to have provided some hints.

Norton, an undrafted free agent initially signed by the Detroit Lions in 2017 who also spent time with the Arizona Cardinals and Minnesota Vikings before joining Los Angeles in 2020, got the start, with he and Pipkins each playing 20 snaps.

But it was Pipkins, a third-round draft pick out of the University of Sioux Falls in 2019, working with the starters in practice Monday. He also got the first reps in individual and team drills when the Chargers and Cowboys held two days of joint practices last week.

Staley said it was important for both Norton and Pipkins to continue to get as much work as possible given their relative inexperience. Norton started 15 games last season after veteran Bryan Bulaga sustained a season-ending core muscle injury in the opener at Washington, while Pipkins has started 10 games during his first three seasons in the NFL.

“They’re both at similar junctures in their career,” Staley said. “I think it would be different if you had a rookie or a second-year player with a fifth-year player and you said, ‘Hey, maybe there is that true gap where you feel like a guy can maybe achieve something because he hasn’t experienced as much football.’

Staley likes the progress Norton and Pipkins have made throughout the offseason, something he said was especially apparent working against Cowboys edge rusher DeMarcus Lawrence and linebacker Micah Parsons.

“My evaluation is that they are both much better football players than they were last season. That is a fact,” Staley said.

However, Staley ruled out a rotation between the two.

“Whoever wins this race is going to be the guy out there,” he said. “I want to make sure that everyone knows that. We’ll let you know when that happens.”

NOTES: CB J.C. Jackson did not practice Monday because of an undisclosed injury. ... WR Joshua Palmer is in concussion protocol. ... Rookie RB Isaiah Spiller is week to week and could miss the season opener against the Las Vegas Raiders on Sept. 11 after spraining his ankle on Saturday. Spiller, a fourth-round draft pick from Texas A&M, was part of the competition to back up Austin Ekeler.