Chargers look to carry momentum into must-win vs. Raiders 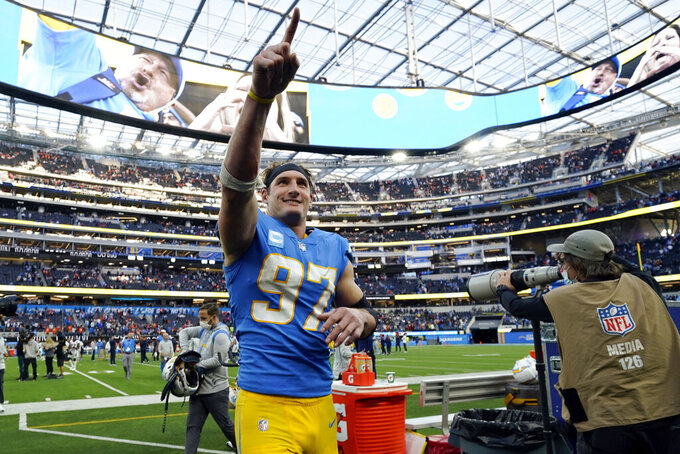 The Los Angeles Chargers had their most complete game of the season in defeating the Denver Broncos 34-13 on Sunday.

They will need the same type of performance as they face their biggest game of the season this week.

Losses by Baltimore and Miami coupled with Los Angeles’ win vaulted the 9-7 Bolts back into the AFC’s final wild-card spot. It was their best performance in all three phases since a 41-22 victory at Cincinnati on Dec. 2.

“I felt like a lot of the things that we discussed in terms of what it would take to win that game we got accomplished,” coach Brandon Staley said.

Sunday’s game at Las Vegas is a de-facto playoff game, even if the schedule says it is Week 18. A win puts the Chargers in the postseason for the second time in four years, while a loss ends their season.

They go in with plenty of momentum after snapping a two-game losing streak. The offense showed balance, with 35 of the 66 plays being runs. The defense snapped an 11-game streak where it had allowed 21 points or more and special teams had their first kick return touchdown since 2012 as Andre Roberts ran it back 101 yards.

Staley has stressed all season that each week carries a life of its own, but the approach will not be any different compared to last week against the Broncos. The only change will be fewer uncertainties on some players because of COVID-19. After having 15 players, including nine starters, in league protocols at the beginning of last week, tight end Jared Cook is the only player who remains on the list.

“I think that anytime you’re in a matchup like this, where there’s a lot at stake, it goes down to your preparation, and your trust in your game,” Staley said. “I think we’re always improving. We need to be better this week than we were last week for sure because this game, you know, is for a playoff spot.”

Roberts has turned around a kick return unit that was the league’s worst.

The Chargers averaged a league-low 16.5 yards per return and had an average starting field position of the 21-yard line. Since Roberts signed on Oct. 21, their 31.0-yard average has led the league since Week 8 and given the offense an average start at the 28.

Besides having the Chargers’ first kick return TD since 2012, Roberts opened the game with a 47-yard return.

“This guy’s one of those in-season acquisitions you’re really fortunate to come upon. Besides the production as a returner, he has just brought a level of professionalism to our team with a really young special teams unit,” Staley said.

The Chargers lead the league with nine roughing the passer penalties, including two in the second half against the Broncos.

The offensive line was missing two starters for most of the game, but didn’t allow a sack or quarterback hit. Trey Pipkins played the entire game at right tackle with Storm Norton still recovering from COVID-19 symptoms. Scott Quessenberry took most of the snaps at center when Corey Linsley came out on the third series because of a back injury.

Linsley’s back injury is not considered serious, making him likely to return to the lineup this week. Linebacker Drue Tranquill (ankle) was inactive last week and is questionable going into the week.

1,027: Receiving yards for Mike Williams, which is a career high. Williams went over the 1,000-yard mark for the second time in his five-year career with a diving 45-yard TD catch during the fourth quarter, giving Justin Herbert the Chargers' single-season record for touchdown passes with 35.

The Chargers won their past two meetings against the Raiders, including a 30-27 decision in overtime in Las Vegas last season when Herbert passed for 314 yards and scored the game-winning touchdown on a 1-yard sneak.