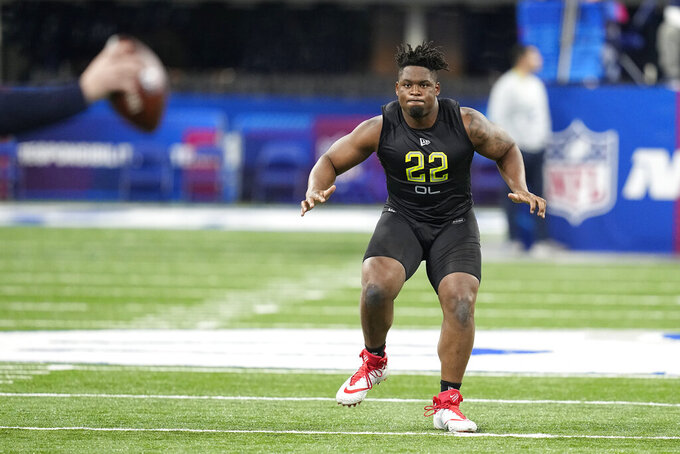 FILE - Boston College offensive lineman Zion Johnson runs a drill during the NFL football scouting combine, Friday, March 4, 2022, in Indianapolis. The Dallas Cowboys could be looking at their offensive line with their first pick in the NFL draft at No. 24. (AP Photo/Darron Cummings, File)

INGLEWOOD, Calif. (AP) — Los Angeles Chargers general manager Tom Telesco acknowledged selecting a guard in the first round is not the sexiest pick, but when it comes to helping the offense take another step forward, taking Boston College's Zion Johnson at No. 17 makes the most sense.

“We have some excellent skilled players. We have Justin Herbert, obviously, these guys cannot really do their jobs without a rock solid offensive line,” Telesco said. “So as much as this pick is to protect our quarterback, which is a big part of it, it's also to facilitate everybody else. It's about pass protection and the run game.”

Los Angeles can only hope Johnson does as well as Rashawn Slater, whom they got with the 13th overall pick last year. Slater moved into the starting left tackle spot and ended up being selected to the Pro Bowl.

“I want to be known as a rugged, tough football team that can beat you any way imaginable. And I think that we’re a lot closer to that,” coach Brandon Staley said.

Johnson said he met with the Chargers during the scouting combine but didn't have any conversations with them after that.

“It was so unexpected. I was mid-conversation when I got the call,” he said. "I’m just so excited to be in LA for the first time and to see all the coaches and meet all of my teammates. It’s awesome.”

Johnson — a first-team Associated Press All-America selection last season — was one of the consensus top prospects at guard coming into the draft. He was the second guard selected in a first round that saw nine offensive linemen go off the board.

He played two seasons at Davidson (2017-18) before transferring to Boston College. He started 30 games for the Eagles from 2019-21 and was part of an offensive line that allowed the third-fewest sacks in the Atlantic Coast Conference in 2021.

According to Pro Football Focus, Johnson allowed only one sack and three quarterback hurries last year.

“A lot of guys, you ask them, ‘When you were in high school, did you see yourself here now?’ For me, honestly, no. I went to Davidson and really, it was just having to overcome a lot of things on my way to Boston College," Johnson said. "I think when I got there, I got a perspective where I thought the NFL was an achievable goal."

Staley said one of the biggest advantages for Johnson is that he played in a pro-style offense at Boston College.

“You’re seeing him really do things that translate to the NFL. Sometimes that’s what holds offensive linemen back is that they don’t really perform in a pro-style system,” Staley said. “You could tell in the interview process that he was really sharp and had full command of the fundamentals and the scheme.”

Los Angeles made major improvements to its offensive line last season by signing center Corey Linsley and left guard Matt Feiler along with the selection of Slater. The right side struggled, though, due to season-ending injuries to right tackle Bryan Bulaga and guard Oday Aboushi.

Johnson has experience at left guard, left tackle and center, but the Chargers see him as their right guard when training camp opens in late July. Right tackle remains the biggest question mark. Barring another offseason move, Storm Norton and Trey Pipkins are expected to battle for the starting spot.

The last time the Chargers used their top pick on an offensive player for a third straight year was 1981. They took quarterback Justin Herbert with the sixth pick in 2020 and Slater last year.

Los Angeles has nine picks remaining, but only one on Friday in the third round (No. 79 overall). They traded their second-round pick to Chicago to acquire linebacker Khalil Mack.