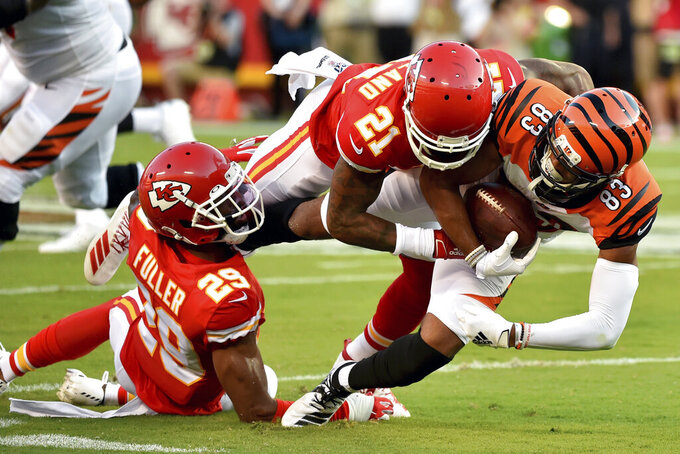 It was an obvious, unsurprising move in many ways: The two had worked together for nearly a decade in Philadelphia, and Spagnuolo was looking to get back into coaching after taking a year off.

The rest of the steps in building a defensive staff were a little more surprising.

For one thing, the choices came from every corner of the coaching landscape.

Linebackers coach Matt House was plucked away from the college ranks, where he had been serving as the successful defensive coordinator at Kentucky. Defensive line coach Brendan Daly had just helped the Patriots win another Super Bowl. Cornerbacks coach Sam Madison had been working in television, his on-field work limited mostly to preparing prospects for the NFL combine.

Throw in new defensive backs coach Dave Merritt, who spent last season with the Cardinals, and holdover Britt Reid — the head coach's son — and it's quite a collection of backgrounds and skill sets.

Just what Spagnuolo had in mind.

"All of these coaches are familiar with Steve, love the game, and are good teachers that have had success in their careers," said Reid, who worked closely with Spagnuolo in assembling the staff.

Their task is simple: Turn a defense that was such a liability last season, and in many ways it cost the Chiefs a spot in the Super Bowl, into a unit that is at minimum mediocre. Or at best able to give the ball back quickly and efficiently to what is arguably the league's most dynamic offense.

"I mean, we've got all the right pieces as far as instructors and teachers go, you know?" Chiefs safety Tyrann Mathieu said. "It's about us going out there and being consistent."

House may be the most interesting of the position coaches, in part because of the hurdles it took for him to get hired. The news leaked in early February that the Chiefs were interested, but his school announced a few days later that House had decided to stay with the program.

Then word filtered out of Lexington that House wanted to take the job in Kansas City, but he was trapped because of a prohibitive buyout — an issue that ultimately got resolved.

"I like the energy he brings every day," said Anthony Hitchens, who is slated to started at one of the inside linebacker spots. "He's definitely an alpha and we need more guys like that. He has a lot of energy and he's also a veteran. He knows about good football."

Daly went from the Super Bowl champions to a Super Bowl contender, leaving coach Bill Belichick's program in New England for a similar job in Kansas City. He's made several other stops in both the NFL and college football, but Daly certainly brings with him a winning pedigree.

Madison played 12 seasons in the league, including a three-year stint with Spagnuolo as his own coordinator with the Giants. But the extent of his coaching experience amounts to an internship under Spagnuolo in St. Louis, then time working with the Ravens, Giants, Dolphins and Seahawks.

"When he called, I jumped at the opportunity," Madison said. "For the last 10 years I've been doing radio and television. Training a lot of kids in the offseason, getting kids ready and prepared for their college training camps and getting ready for combines and stuff like that."

Now he's working with Mathieu and Co. on a vastly revamped defensive backfield, drawing on a unique path toward being an assistant coach with the three-time defending AFC West champions.

Madison fits right in with the rest of their defensive assistants.

"I think the leadership is a big thing," said Chiefs quarterback Patrick Mahomes, who has been facing the retooled defense throughout camp. "Guys are really taking accountability for knowing every single position on that defense. I think that's the biggest thing — they're being assignment-sound, they're doing exactly what the coaches are telling them to do and it's working."

NOTES: WR Sammy Watkins missed practice Wednesday with an illness. ... DE Frank Clark (hip) was on hand but did not practice. He was ill Tuesday. ... The Chiefs have their final workout of training camp at Missouri Western on Thursday morning. They play Pittsburgh on Saturday in their second preseason game before resuming their work at their own facility in Kansas City next week.