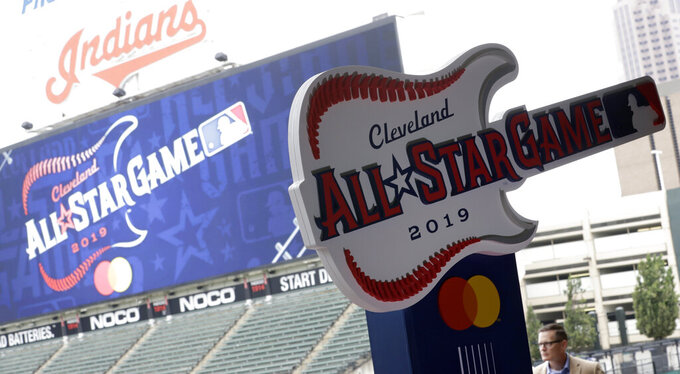 FILE - The new logo for the 2019 All-Star Game is displayed, Tuesday, Aug. 7, 2018, in Cleveland. The Indians are reviewing their contentious nickname. The team released a statement on Friday, July 3, 2020 saying it is committed to “making a positive impact in our community and embrace our responsibility to advance social justice and equality.” The club said it plans to review a nickname it has had since 1905.(AP Photo/Tony Dejak, file)

CLEVELAND (AP) — They've been known as the Cleveland Indians since 1915. Those days could be over.

Amid new pressure sparked by a national movement to correct racial wrongdoings, the Indians said Friday night they will review their long-debated nickname which has been in place for 105 years.

“We are committed to making a positive impact in our community and embrace our responsibility to advance social justice and equality,” the team said in a statement that came just hours after the NFL's Washington Redskins announced a similar move. “Our organization fully recognizes our team name is among the most visible ways in which we connect with the community.”

The move mirrors the one made by the Redskins, who are embarking on a “thorough review” of their name, which has been deemed as offensive by Native American groups for decades. The Redskins’ decision came in the wake of FedEx, which paid $205 million for naming rights to the team’s stadium, and other corporate partners calling for the team to change its nickname.

There have been previous efforts to get the Indians to rename themselves. But following the death of George Floyd in Minnesota and other examples of police brutality against Black people in the U.S., there has been a major move nationwide to eradicate racially insensitive material.

In 2018, the Indians removed the contentious Chief Wahoo logo from their game jerseys and caps. The grinning, red-faced mascot, however, is still present on merchandise that can be purchased at Progressive Field and other team shops in Northeast Ohio.

Nothing has been decided, but the Indians' decision to at least discuss the possibility of a name change is new. There will certainly be backlash from some Cleveland fans, but the team is sensitive to doing the right thing in these changing times.

“We have had ongoing discussions organizationally on these issues,” the Indians said. “The recent social unrest in our community and our country has only underscored the need for us to keep improving as an organization on issues of social justice. With that in mind, we are committed to engaging our community and appropriate stakeholders to determine the best path forward with regard to our team name.”

“While the focus of the baseball world shifts to the excitement of an unprecedented 2020 season, we recognize our unique place in the community and are committed to listening, learning, and acting in the manner that can best unite and inspire our city and all those who support our team," the club said.

Before their named was changed in 1915 to Indians — a nickname picked after sports writers solicited readers — Cleveland's baseball team was called the Forest Citys, the Spiders, Blues, Bronchos and Naps, a name to honor Hall of Famer Nap Lajoie.