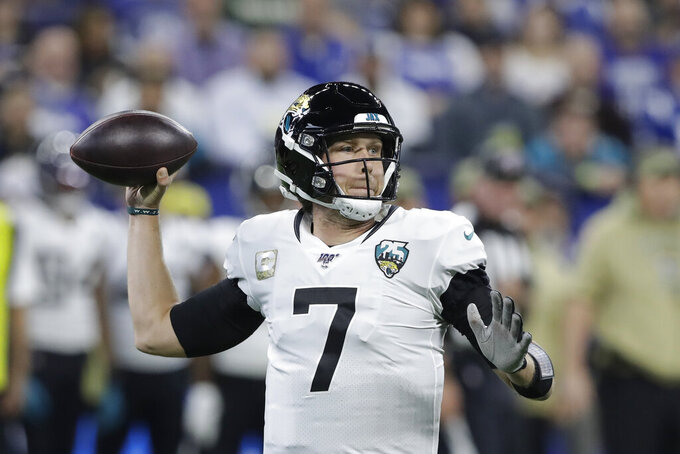 Jacksonville Jaguars quarterback Nick Foles (7) throws during the first half of an NFL football game against the Indianapolis Colts, Sunday, Nov. 17, 2019, in Indianapolis. (AP Photo/Darron Cummings)

Marlon Mack waited patiently for holes to open. Jonathan Williams took advantage of each opportunity. Jacoby Brissett and Nyheim Hines both ran for scores, and even All-Pro left guard Quenton Nelson got a chance to carry the ball.

The throwback strategy worked perfectly. Indy rushed for a season-high 264 yards and overpowered Jacksonville 33-13 for the franchise’s 300th win since moving to Indianapolis in 1984.

“I don't think you ever expect to run for that many yards in an NFL game because defenses are too good and that defense is too good,” coach Frank Reich said. “I can't give our guys enough credit for how well they played.”

The Colts turned a milestone day into an unforgettable performance.

Mack ran 14 times for 109 yards and one score before leaving in the third quarter with a hand injury. Williams finished with 13 carries for a career-high 109 yards and twice gave himself up after long, fourth-quarter runs to keep the clock moving, including a 48-yard run when Reich said Williams wasn’t even supposed to be in the game.

It’s the first time the Colts have had two 100-yard runners in a game since Oct. 6, 1985, and only the third time in franchise history.

Indy (6-4), meanwhile, snapped a two-game losing streak and reclaimed a share of the AFC South when Houston lost to Baltimore.

The only thing that went awry: Nelson’s apparent 1-yard TD run on third down was nullified by a replay review. Brissett cleaned it up by hooking up with Marcus Johnson for a TD pass on fourth down.

“You know he's an All-Pro left guard and I think we'll keep him there,” Reich said. “But you know him, he was all apologetic that he didn't get it in there.”

Indy made sure the ruling didn’t matter on a day both starting quarterbacks returned from injuries.

Brissett went 15 of 24 with 148 yards, one touchdown and one interception after missing last week’s game with a bad left knee.

Foles, meanwhile, did more of the heavy lifting in his first appearance since a broken left collarbone knocked him out of the season opener. He was 33 of 47 with 296 yards, two touchdowns and one interception as the Jaguars (4-6) in his first game back.

Jacksonville has lost four of six, but this one was not Foles’ fault.

“We got handled out there,” coach Doug Marrone said. “We tried to stop the run a couple of different ways and we didn't do it.”

After Foles opened the scoring with a 34-yard TD pass to DJ Chark Jr., Mack tied it by spinning out of a pile, breaking a tackle and scoring on a 13-yard run.

Adam Vinatieri broke the tie with a record-breaking 34-yard field goal in the second quarter and the Colts sealed the win with three second-half scores.

Jaguars: Leonard Fournette carried eight times for 23 yards on a day Jacksonville rushed for only 29 yards. ... Chark caught six passes for 104 yards and both of the Jags’ TDs, the second coming on a 20-yard catch with 1:05 remaining. ...

Colts: Bobby Okereke closed out the scoring by picking off Foles’ conversion pass with 1:05 left and returning it for two points. ... Vinatieri broke Morten Andersen’s league record for field goal attempts in the first half. He now has 710, one more than Andersen. ... Vinatieri also became the first Colts player to make 500 extra points and top the 1,500-point mark. He has made a league-record 597 field goals and has 503 extra points and 1,505 points since joining the Colts in 2016. ... Indy had a season-high point total.

Marrone: “We tried everything,” the coach said of his run defense. “When a team rushes for that many yards, it's not going to be one thing. It's going to be multiple things and it seemed like we could never get it stopped.”

Brissett: “I almost cried because I thought that (Nelson’s) celebration was pretty cool. I hope that still can be nominated as one of the best celebrations because I don't know how they picked him up.”

Jaguars: Defensive end Lerentee McCray left in the first half with an injured hamstring, and tight end Josh Oliver left in the fourth quarter with a back injury.

Colts: Rookie cornerback Rock Ya-Sin also did not return after limping off the field going straight to the locker room with an injured ankle in the third quarter.

Jaguars: head to Tennessee for another key division game and their second straight road trip.

Colts: head to Houston on Thursday with the division lead at stake.