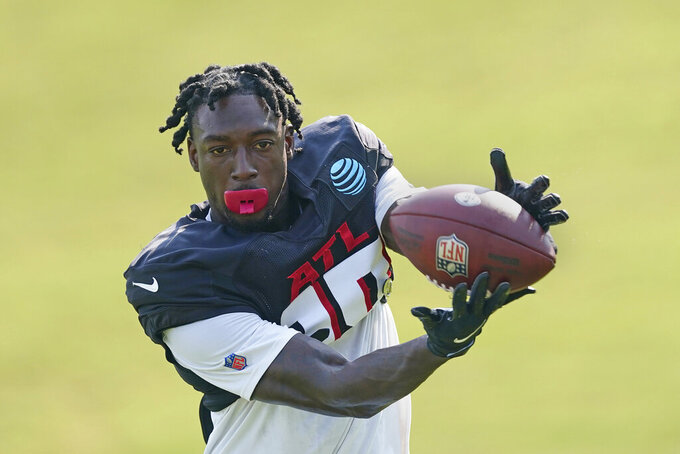 FILE - Atlanta Falcons wide receiver Calvin Ridley (18) makes a catch during the team's NFL training camp football practice Monday, Aug. 9, 2021, in Flowery Branch, Ga. Falcons wide receiver Calvin Ridley has been suspended for the 2022 season for betting on NFL games in the 2021 season. The suspension announced by NFL commissioner Roger Goodell on Monday, March 7, 2022, is for activity that took place while Ridley was away from the team while addressing mental health concerns.(AP Photo/John Bazemore, File)

Calvin Ridley had no inside information and, apparently, no idea how to bet. In other words, he was just like millions of other neophyte bettors lured in by promises of riches from sports betting operators and the leagues they cohabitate with.

Except Ridley plays for the Atlanta Falcons. And that’s where things get a little dicey.

Ridley did both, and it cost him one of the worst bad beats ever. Suspended Monday for at least a year by hypocrite-in-chief Roger Goodell, the wide receiver is out $11 million in salary for what he said was $1,500 in bets made while he was on mental health leave from the team.

The bets were relatively paltry, and the crime didn’t seem much worse. Ridley wasn’t even around his team at the time he made the bets — which according to various reports were long shot parlays of as many as eight teams — and he certainly wasn’t trying to fix any games.

This wasn’t 1963, when Green Bay halfback Paul Hornung and Detroit Lions defensive tackle Alex Karras were suspended indefinitely for betting on NFL games and associating with “known hoodlums.” Ridley made the bets on a phone in Florida where it was legal through a casino that sponsors Miami’s stadium.

Like most aspiring bettors, he just wanted a little action.

“I know I was wrong,” Ridley tweeted after his suspension was announced. “But I’m getting 1 year lol.”

One year does seem a bit excessive, especially in an age when the NFL and its teams not only tolerate betting but encourage it — at least among the general population. A Sunday didn’t go by last season without constant reminders on TV about betting partners and sponsorships as the league and the industry settled into a profitable partnership neither saw coming just a few years earlier.

At nearly every commercial break we listened to an assortment of characters from Julius Caesar to the Manning family telling us to sign up and bet, something duly noted by former coach and TV analyst Tony Dungy.

“When we as a league encourage everyone to bet on our games, advertise betting on our players’ game stats, take in big money from gambling sites & do everything we can to get our young people to embrace gambling — We can’t be surprised when this happens,” Dungy tweeted after the suspension was announced.

If it seems a bit awkward, it is. The morality police who once railed about the evils of gambling are now profiting by the new craze.

Indeed, Ridley actually may have done Goodell a favor by allowing him to make a tough stand against player betting while at the same time not interfering with the flow of money from the betting sites to the NFL coffers.

Here’s a short version of the new rules of order if you're still confused: Betting is good. Betting by players is bad.

“There is nothing more fundamental to the NFL’s success — and to the reputation of everyone associated with our league — than upholding the integrity of the game,” Goodell said.

Hopefully, Goodell keeps that lofty premise in mind as the league investigates allegations made by former Dolphins coach Brian Flores that Miami owner Stephen Ross offered him $100,000 a loss a few years back so the team would tank enough to get the top pick in the draft.

Ross denies the allegations made in a lawsuit against the league and no one else has come forward publicly to substantiate them. But game fixing goes to the core of sports betting fears, and if Ridley can be suspended for a year for his long shot parlay bets, Ross should be booted from the league if enough evidence emerges to back the claims.

The bottom line is that sports bettors want the same thing ordinary fans want from the NFL — games that are on the level and above suspicion, untainted by players, owners or the guy putting air in the footballs.

That means no betting by players, coaches or anyone else on the field. It means no tampering by owners or general managers or even Goodell himself. It means being more transparent about everything from injuries to suspect calls so that those watching don’t automatically think something is fishy.

It also means handing out punishment to those who break the rules.

That includes Ridley, no matter how bad his bets were.