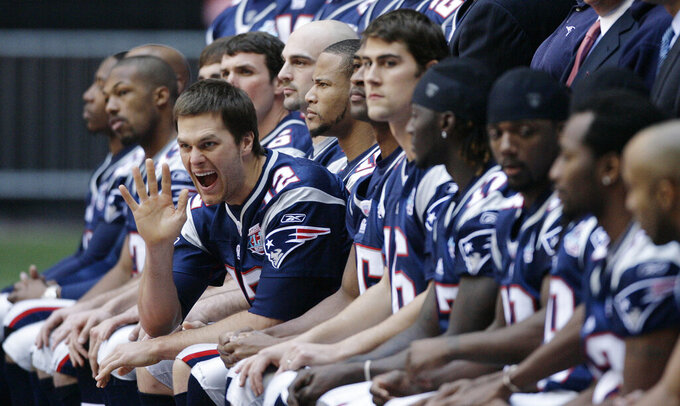 FILE - New England Patriots quarterback Tom Brady waves during the team's picture at the walk through at University of Phoenix Stadium on Saturday, Feb. 2, 2008, in Glendale, Ariz. Tom Brady has retired after winning seven Super Bowls and setting numerous passing records in an unprecedented 22-year-career. He made the announcement, Tuesday, Feb. 1, 2022, in a long post on Instagram. (AP Photo/Stephan Savoia, File)

The smart ones get out while people are still lining up to see them play. Tom Brady was even smarter than that. He was so good for so long that it made the toughest decision of his own career easy for everybody else.

Sure, it could have gone smoother. As things turned out, it resembled nothing so much as a broken play that runs for three days without end. But try and name another transcendent athlete who exited the stage to smiles on almost every side of him. We'll wait.

Brady’s unparalleled accomplishments left no room for regrets and his departure, messy as it was, spared the rest of us worrying about whether or when he’d break down.

Yet his performance this season left no doubts, either, that Brady could have suited up for at least one more if he desired. He just didn't.

“I have always believed the sport of football is an ‘all-in’ proposition — if a 100% competitive commitment isn’t there, you won’t succeed,” Brady said in his retirement announcement Tuesday on Instagram, “and success is what I love so much about our game.”

Go ahead, quibble with the way the “will-he-or-won’t-he” drama bounced around the internet and triggered “Breaking News” alerts across TV shows of every stripe. No one summed all that dithering up better than the New York Jets’ Twitter account, which posted simply, “this better be real.”

And maybe, if you’re Patriots owner Bob Kraft, coach Bill Belichick, a teammate during his salad days there and the millions who rooted for him across New England, well, you’re wondering how Brady found space in a long post to thank just about everyone else — his wife, agent, trainer, the entire Bucs organization and even the Tampa Bay area — without even one word about you. So maybe that “competitive commitment” still flickers brightly in at least one corner of his psyche.

But trust me: Brady did right by you — he jumped on Twitter just long enough to reassure the Pats and their fans “I'm beyond grateful Love you all.” — and soon enough, you’ll remember him every bit as fondly as everyone else.

Besides, it’s not like he’s lacking for praise. Even before he made it official, so many players sprinted onto social media to congratulate Brady that the websites resembled a guestbook. Some included postgame pictures of themselves posing with Brady; unironically and more often than not, just moments after he’d beaten them Nearly all included the goat icon — shorthand for “Greatest of All Time” — a title that Brady could have claimed long before his age-defying feats with the Bucs.

Around this same time a year ago, the Associated Press asked the best of the best — eight current and former champions from seven different sports, among them LeBron James, Wayne Gretzky and Serena Williams — what about Brady impressed them most. None spilled trade secrets and several pointed wistfully at his longevity, but all of them mentioned the same qualities fans and foes attached to Brady a long time ago: intelligence, leadership, diligence and above all, a competitive streak that only the passage of time could dim.

"An unrelenting drive” is the way Michael Jordan, an expert on that very topic, put it.

The good news, of course, is that Brady makes his exit with the prospect of as many satisfying days ahead as the ones he leaves behind. He pledged to lavish the time and energy he once reserved for football on his supermodel wife, Gisele Bundchen, and their three kids, as well as his many and varied business interests.

The great ones don't simply play the game better than anyone else, they change the way it's played. In Brady's case, he proved even the most violent game on the planet can be played at that level for longer than we could have imagined.

But the same guy who was so skinny coming out of college that he wasn't taken until the 199th pick of the NFL draft had it planned this way all along. All those times he stayed for extra practice drills, pushed back from the training table before anyone else and went to bed early were in there, too.

The real wonder of Brady is that he turned his love for the game as a kid into a blueprint that would enable him to play on into his mid-40s, and if the audaciousness of that doesn't make you smile, good luck finding a happier way for a career in what will always be a young man's game to end..