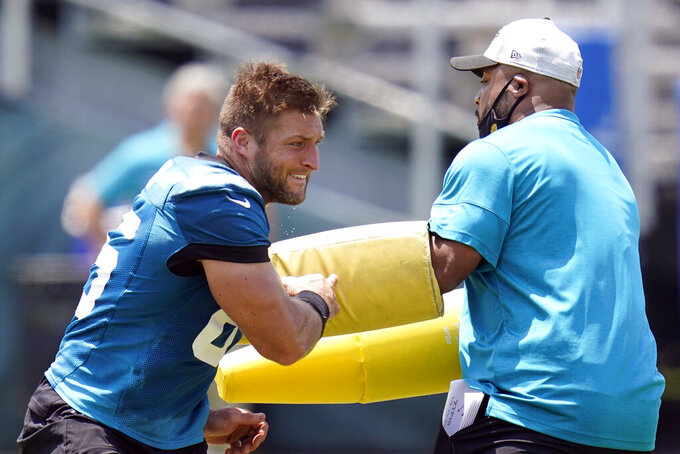 FILE - Jacksonville Jaguars tight end Tim Tebow, left, performs a drill during an NFL football team practice in Jacksonville, Fla., in this Thursday, May 27, 2021, file photo. Tebow will open training camp Wednesday, July 28 as Jacksonville’s fourth- or fifth-string tight end, not all that surprising given he’s closing in on his 34th birthday, started playing the position five months ago and is trying to return to the NFL after spending the previous five years in the New York Mets’ organization. (AP Photo/John Raoux, File)

JACKSONVILLE, Fla. (AP) — Tim Tebow is one of the first to arrive at Jacksonville Jaguars practice. He jogs onto the field, stretches a little, catches footballs from a Jugs machine, then finds his usual spot in the team’s warmup lines. He’s waaaay in the back, just in front of a rookie.

Tebow will open training camp Wednesday as Jacksonville’s fourth- or fifth-string tight end, not all that surprising given he’s closing in on his 34th birthday; started playing the position five months ago; and is trying to return to the NFL after spending the previous five years in the New York Mets’ organization. He hit .223 with 18 home runs and 107 RBIs while never making it to the big leagues.

He asked Meyer, his college coach at nearby Florida, for a tryout after retiring from baseball in January. Meyer obliged and ended up giving him a one-year contract worth $920,000, the minimum for a player with three accrued NFL seasons. The low-risk deal includes no guaranteed money, so Tebow would have to make the team to earn a dime.

Jacksonville also has Tyler Davis, a sixth-round selection in 2020, and second-year pro Ben Ellefson, whom Meyer calls one of the most improved at the position.

The Jaguars have offered little information about Tebow’s transition, partly because they don’t want the former star quarterback becoming a daily distraction.

The rebuilding team didn’t make Tebow or any other tight end available for media interviews during organized team activities and canceled position coach Tyler Bowen’s scheduled session at the last minute in June.

Offensive coordinator Darrell Bevell, meanwhile, mentioned four tight ends – just about everyone but Tebow – when asked about competition at the spot.

“Some of the things that the tight end position is asked to do is really not going to show up in a camp like this,” he said following a three-day minicamp last month. “It’s a physical position. It’s part offensive line and it’s part wide receiver. So some of the stuff is not going to be able to show up, but it’s a much-improved room from top to bottom.”

No doubt Tebow will have a better chance of standing out when players start practicing in full pads next week. The 6-foot-3, 245-pounder has always been one of the more imposing guys on the field – big, strong and eager to run over anyone in his path.

It’s one of the reasons Meyer believes his best position could be tight end. But to make the Jaguars, Tebow might need to be more versatile than ever: a dependable backup tight end, a core special teams player, a wildcat option in short-yardage and goal-line situations. Maybe even an emergency QB.

No matter what he does, he’s sure to still have doubters.

“As a player that went through training camp with Tim, there’s going to be players rolling their eyes at how much attention the fourth- or fifth-string tight end gets,” former New York Jets quarterback and current ESPN college football analyst Greg McElroy said. “It’s going to (tick) people off. As a result, it’s going to affect locker room chemistry, like it did with us with the Jets. Not because there’s animosity toward Tim, but there’s animosity toward the coverage Tim receives. I think it’s a stupid move.

“You’re starting your tenure at Jacksonville, you’re setting the tone and people say he can help with leadership. Let me tell you what helps with leadership in the NFL: money. You want guys to be incentivized? Pay them. ... I think it really undercuts what Urban Meyer is trying to build.”

Although some question how such a polarizing figure, one who already failed to stick as a quarterback and as an outfielder, fits in an NFL locker room, teammates have publicly welcomed Tebow.

“He’s attacking special-teams drills. He’s attacking every drill. He’s running drill to drill. Everything is high energy with him,” Jaguars quarterback Gardner Minshew said on former NFL defensive end Chris Long’s podcast last week. “If he messes something up … it affects him. He doesn’t like it. He wants to get it right. He’s going to go to the side, get a couple reps, get it right and come back in. And he’s just a guy that genuinely wants it, man. It’s awesome to see.”

How Tebow's comeback story ends will be determined over the next five weeks — or maybe longer. He has practice squad eligibility, so he could land there to start the 2021 season and work to better hone his new position. In the meantime, Minshew, for one, will enjoy the opportunity to play alongside a guy whose No. 15 jersey (Tebow is wearing 85 now) he wore growing up.

“He’s a pretty bad dude,” Minshew said. "It's so cool, man. And you meet him and he’s everything you’d want him to be and more. Like, it’s so cool.”