Crucial draft for Jets, GM Douglas with 2 picks in top 10 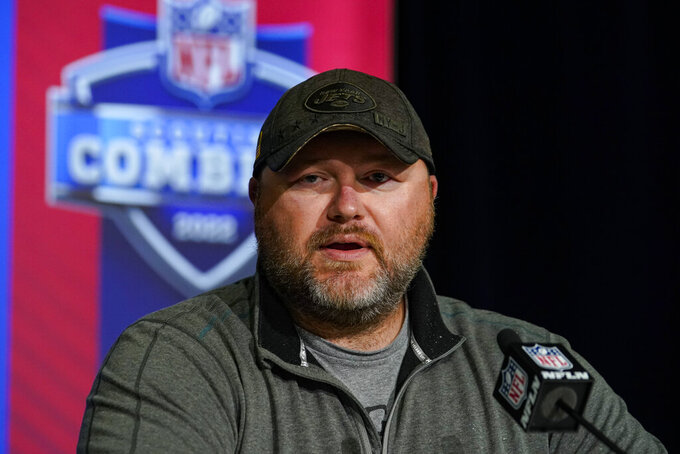 With picks Nos. 4 and 10, the team has two selections in the top 10 for the first time. And with plenty of needs even after a shopping spree in free agency, Douglas will get a chance to add two potential long-term starters while the pizza's still hot and the beer ice cold at Jets fans' draft parties.

If he doesn't trade out of one — or both — of those spots.

“I think obviously it depends on who we’re talking about,” Douglas said last month at the league meetings in Palm Beach, Florida. “If it’s the right opportunity, we’ll consider any packages. But ultimately, we want to talk about a package that makes sense for us and gives us the ability to maintain our flexibility.”

In other words, everything's on the table for the Jets.

And that's how it should be for a team that has the league's longest active playoff drought at 11 seasons. This is Douglas' third full offseason as the GM and the pressure is on to build a roster that will compete for a playoff spot — at least into December.

But what Douglas does with his picks this year could very well shape the future of a franchise in desperate need of wins.

“There’s pressure every offseason, but obviously this year, having four picks in the top 38, we do this the right way, it could really be special," Douglas said. “And where we set ourselves up with free agency and the opportunity here with these top four picks, again, it’s a huge opportunity for us.”

Defensive end Carl Lawson will be back after missing last season with a ruptured Achilles tendon in his left leg. His return will boost the pass rush, but the Jets will be in position to add another big-time playmaker to complement him.

While Michigan's Aidan Hutchinson isn't expected to fall to No. 4, Oregon's Kayvon Thibodeaux and Georgia's Travon Walker could be there when New York goes on the clock. And for a team that has been searching for a consistently dominant pass rusher since the days of John Abraham in the early 2000s, it might be tough to pass up anyone who might cause problems for opposing quarterbacks.

“You guys know me, I’ve said it before, if we had the Fearsome Foursome, we’d still be wanting to add a pass rusher,” Saleh said at the league meetings. “It’s always going to help. If the opportunity presents itself, we’ll get it, but we’re not going to force the position, either.”

The Jets signed Reed to be their No. 1 cornerback. Bryce Hall and Brandin Echols — last year's starters — figure to be in the mix to start at the other spot. But this is another position New York figures to bolster, and it could do so at No. 4.

Cincinnati's Ahmad “Sauce” Gardner has been rising on team's draft boards and projects as a top cornerback. If the Jets go elsewhere with their first pick, LSU's Derek Stingley Jr. could be enticing at No. 10.

After the Jets' failed attempt to trade for Tyreek Hill, it's clear New York wants to add playmakers around Wilson.

While Douglas could look to pry an established veteran from another team — perhaps Seattle's DK Metcalf or San Francisco's Deebo Samuel — adding a receiver with the 10th selection is a strong possibility.

USC’s Drake London, Ohio State’s Garrett Wilson and Alabama's Jameson Williams could be in the mix to become the first wide receiver taken by the Jets in the first round since Santana Moss went 16th overall in 2001.

If Alabama's Evan Neal and/or N.C. State's Ikem Ekwonu are still on the board at No. 4, Douglas — who loves offensive linemen — will have a tough decision.

The Jets would appear set up front with a starting five of Tomlinson (LG), Vera-Tucker (RG), Connor McGovern (C) and tackles Becton and George Fant. But with Becton coming back from a knee injury that sidelined him for all but one game, it might be tempting to add another O-lineman even if the D-line might be more of a pressing need.

“We’re going to go into a bare-knuckle boxing match,” Saleh joked when asked how he and Douglas might decide between an O-lineman or D-lineman early. “It’s going to be a great discussion, for sure.”

This marks the sixth time the Jets have the No. 4 overall pick, and first since they took left tackle D'Brickashaw Ferguson in 2006.

If New York stays at No. 10, it'll be the third time it picks in that spot, and first since taking wide receiver Al Toon in 1985.