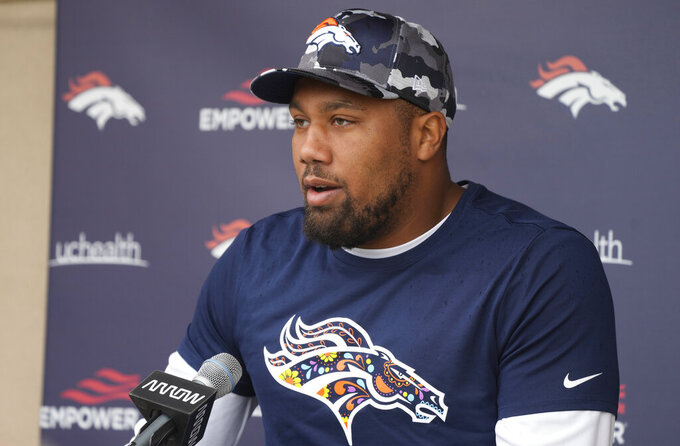 ENGLEWOOD, Colo. (AP) — The defense has long done the heavy lifting in Denver no matter who's the Broncos quarterback, and so far it's not different with Russell Wilson under center.

Wilson is off to the slowest start of his career, completing less than 60% of his passes and throwing for just two touchdowns in his first three games following his big trade from Seattle.

And yet, Russell has engineered consecutive fourth-quarter comebacks against Houston and San Francisco, putting the Broncos (2-1) atop the AFC West alongside Kansas City heading into this weekend's grudge match at Las Vegas (0-3), where the Raiders have dropped three close games under former Broncos head coach Josh McDaniels.

That marked the Broncos' first conversion in seven red zone trips, and it was all made possible by Denver's defense keeping things close enough for Wilson to pull off his fourth-quarter magic for a second straight week.

“I was just proud of my defense, man," Wilson said after watching Jimmy Garoppolo get sacked four times and the Niners commit three turnovers.

Wilson remains hopeful for his offense, saying once it comes together, it'll be spectacular.

“We're still all learning each other,” Wilson said, “it's a whole new system.”

The Broncos are averaging a paltry 14.3 points per game as Wilson and Hackett work out the wrinkles and speedsters Jerry Jeudy (ribs) and KJ Hamler (knee, hip) work their way back to health.

Only the Indianapolis Colts (13.3) are having a harder time scoring points than the Broncos.

Denver's defense, on the other hand, is allowing just 12 points a game, second in the league behind the Buccaneers (9.0), despite being without star safety Justin Simmons, who injured a thigh in the opener at Seattle and is out until mid-October.

“I don’t mean to sound too brash,” said linebacker Bradley Chubb, “but I think we’re the best defense in the league.”

The Broncos make a good argument.

Cornerback Patrick Surtain II is shutting down an entire half of the field, and Chubb and his new pass-rushing partner, Randy Gregory, have combined to get five sacks and force three fumbles.

Both are coming off surgeries. Gregory had a shoulder operation after signing as a free agent this spring and missed much of the offseason program. Chubb had more ankle surgeries last year (two) than sacks (zero).

“We’re just going to stay together as a team," Chubb said. “On the offensive side of the ball, I know they’re going to get it right and everything will fall into place and the flood gates are going to open.”

Broncos punter Corliss Waitman won AFC special teams player of the week honors after placing six punts inside the 20 against the Niners in just his fifth NFL game. He also received a game ball from Hackett in the boisterous locker room afterward. Asked what he did with that memento, Waitman said Wednesday, “I slept with it.”

The line of the day, however, belonged the usually stoic Wilson in response to Eli Manning's good line this week that the Broncos should have paid their punter $245 million instead.

Wilson returned the roast Wednesday. Asked for his response to Manning's dig, Wilson invoked the former QB's new alter ego in which Manning transformed himself into a Penn State walk-on named Chad.