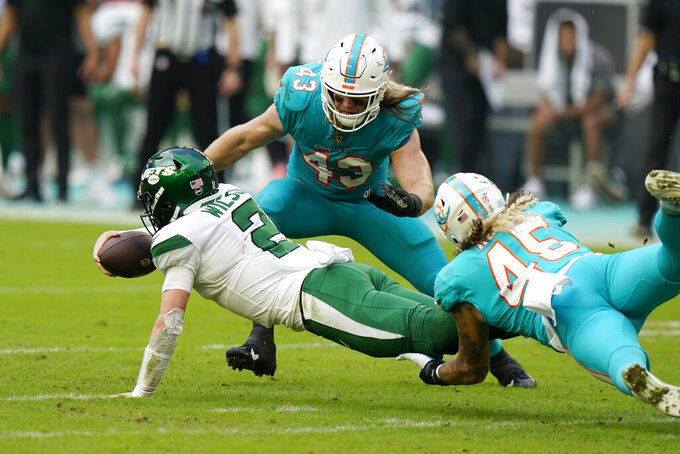 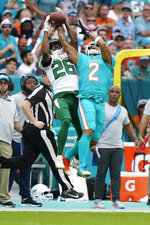 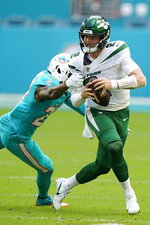 MIAMI GARDENS, Fla. (AP) — Duke Johnson grew up in the shadow of Hard Rock Stadium, went to high school a couple miles away and played his college football on the Miami Dolphins' field.

He'd waited a long time for a day like Sunday.

Johnson rushed for 107 yards and had a career-best two touchdowns, DeVante Parker caught an 11-yard touchdown pass from Tua Tagovailoa with 3:37 left and the Dolphins extended their winning streak to six games by topping the New York Jets 31-24 on Sunday.

“It means a lot," Johnson said. “Growing up in the area, just being able to play football and play well here, it meant a lot but it meant even more because we got the win. That helps."

Johnson — basically the go-to back for Miami as a last resort because of virus-related issues throughout the week — helped the Dolphins (7-7) rally from an early 10-0 deficit. It was the first 100-yard game from a Miami rusher this season.

His output wasn't the only surprise. Defensive lineman Christian Wilkins caught a touchdown pass early in the fourth quarter for Miami, juggling the ball before controlling it and then letting loose with a wild celebration. The 6-foot-4, 310-pound defensive lineman leaped into the stands, then did “the worm” in the end zone as teammates danced around him.

“That was awesome," said Tagovailoa, who ran over the Jets' Michael Carter II on a second-half rumble on a day filled with surprising plays by Miami. “That was cool, cool to see him score."

Brandin Echols had a 20-yard interception return for a touchdown midway through the fourth for the Jets (3-11). Zach Wilson and Braxton Berrios rushed for scores for New York; Wilson completed 13 of 23 passes for 170 yards for the Jets.

New York had a halftime lead for the first time all season, yet couldn't finish things off.

“We could never get anything rolling in the second half when it comes to sustaining drives," Jets coach Robert Saleh said.

Tagovailoa completed 16 of 27 passes for 196 yards, two touchdowns and two interceptions for Miami.

The Dolphins became the second team in NFL history to get to 7-7 after starting a season 1-7. The other team on that list — the Jets, in 1974. The season was only 14 weeks back then, so that’s where the Jets’ turnaround ended and did so without a playoff berth.

Playoff talk is still a long way from real in Miami this season, but the Dolphins at least remain alive with games left to play against New Orleans, Tennessee and New England.

“It’s the game we thought it was going to be," Dolphins coach Brian Flores said. “A 60-minute battle."

Berrios — back in the stadium where he, like Johnson, played his college football for Miami — opened the scoring by pinballing his way into the end zone from 2 yards out. Tagovailoa was picked off on the next Miami drive, which the Jets turned into a field goal and a 10-0 lead.

Johnson scored from a yard out to get the Dolphins on the scoreboard, only to have it answered by Wilson doing the same to restore the Jets’ 10-point edge.

But Johnson tied it early in the third to cap an eight-play, 76-yard drive, and Wilkins gave Miami a 24-17 lead just 33 seconds into the fourth quarter. Tagovailoa’s pick-6 throw cost Miami the lead, but then his pass to Parker ended up as the eventual winner.

“The O-line did a great job today up front with creating those opportunities for Duke to find a hole and hit it and find ways to bounce the ball and have Duke be himself," Tagovailoa said. “That’s how he was his entire career and I’m glad we were able to witness that today."

Jets safety Elijah Riley was taken off the field on a backboard after injuring his neck during the third quarter. Riley’s head was stabilized before he was removed from the field on a cart. Thankfully, it all ended up being precautionary: Saleh said Riley would return to New York with the Jets on Sunday night.

Jets: DL Quinnen Williams had a shoulder injury, announced in the third quarter.

Dolphins: S Jevon Holland, who spent some time during the week on the COVID-19 reserve list and then was activated in case he could play, was ruled out Sunday morning.

The Dolphins play their next two games on the road and aren’t back home until the season finale Jan. 9 against New England. That gives workers plenty of time to pull off the enormous task of setting up for — and then tearing down from — the Orange Bowl on Dec. 31. It’s a College Football Playoff semifinal this year between No. 2 Michigan and No. 3 Georgia.

Miami swept the Jets for the second consecutive season, the first time that has happened since 1996 and 1997. The Dolphins have won eight of the last nine meetings with the Jets; the last 8-1 run by Miami in the series was from 1982 through 1985, including a victory in the AFC championship game on Jan. 23, 1983.