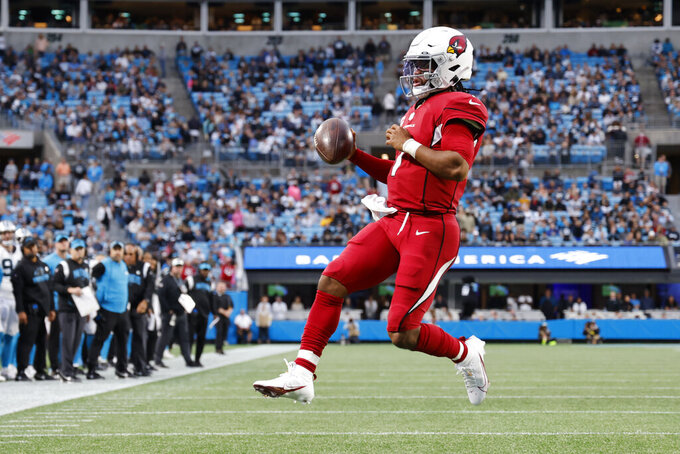 BETTING LINE: Eagles by 5 1/2, according to FanDuel Sportsbook.

TURNOVER DIFFERENTIAL: Eagles plus-8, Cardinals plus-4.

EAGLES PLAYER TO WATCH: QB Jalen Hurts has entered the MVP conversation with four outstanding performances to help the Eagles reach 4-0 for the sixth time in franchise history. Hurts is first in the NFL in yards per attempt (9.1) and ranks fifth in the league in yards passing.

CARDINALS PLAYER TO WATCH: TE Zach Ertz will face his former team nearly a year to the day since the Cardinals acquired him in a midseason trade. Ertz played nine seasons with Philadelphia, where he was a three-time Pro Bowl selection and 2018 All-Pro. Ertz caught the game-winning touchdown in Super Bowl 52. Ertz has caught 22 passes for 181 yards and two touchdowns for Arizona this season.

KEY MATCHUP: Hurts will be a good test for the Cardinals defense, which had a bad start in the season opener against the Chiefs, but has been pretty good over the past three weeks. Defensive linemen J.J. Watt and Zach Allen and linebacker Dennis Gardeck all had big plays in last week's win over the Panthers.

STATS AND STUFF: The Cardinals have a 6-0 record against teams from the NFC East during coach Kliff Kingsbury's four seasons. ... Cardinals QB Kyler Murray has a 4-0 record against fellow Oklahoma quarterbacks in the NFL. He's 3-0 against Baker Mayfield and 1-0 against Hurts. ... The Cardinals have just two turnovers through four games, which is tied for tops in the NFL with the Eagles and Cowboys. ... Second-year Arizona LB Zaven Collins has 27 tackles this season, already topping his 25 from his rookie season. ... The Cardinals are 2-0 on the road and 0-2 at home this season. ... The Eagles are the last remaining undefeated team in the NFL. It's the sixth time in franchise history the team has started 4-0 in a season. The most recent was in 2004. ... Hurts' 205 yards rushing are second for all quarterbacks. He leads QBs with four rushing touchdowns. That number is good for third in the NFL. ... Only Kansas City's Patrick Mahomes (.857, 12-2) has a higher QB winner percentage than Hurts (.833, 10-2) since Week 8 in 2021 ... The Eagles rank first in the NFL with 16 sacks this season. ... Philadelphia's Haason Reddick leads the team with 3 1/2 sacks. He played his first four seasons with the Cardinals from 2017-20. Reddick had a career high 12 1/2 sacks with the Cardinals in 2020. ... The Cardinals were the final undefeated team in 2021, starting with a 7-0 record.

FANTASY TIP: Cardinals WR Marquise Brown could be a true WR1 option over the next two games until DeAndre Hopkins returns from his six-game suspension. Brown caught six passes for 88 yards and a touchdown against the Panthers. He and Murray were teammates in college at Oklahoma and it's clear they still have some chemistry.