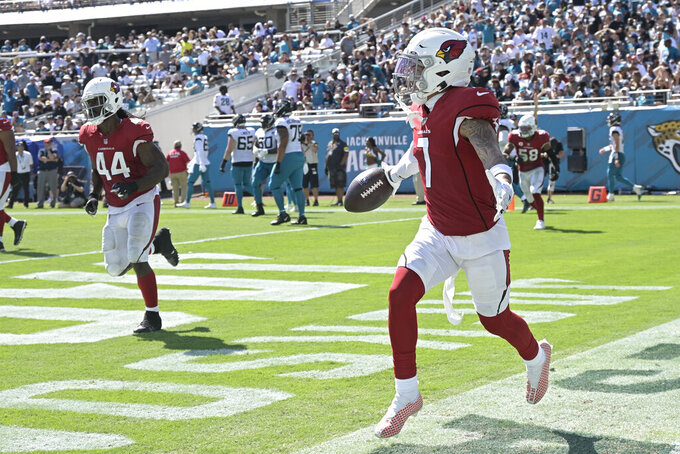 Arizona Cardinals cornerback Byron Murphy (7) celebrates his touchdown against the Jacksonville Jaguars on an intercepted pass during the second half of an NFL football game, Sunday, Sept. 26, 2021, in Jacksonville, Fla. (AP Photo/Phelan M. Ebenhack)

JACKSONVILLE, Fla. (AP) — Jacksonville Jaguars coach Urban Meyer admittedly had reservations about the trick play even though he didn't overrule it.

It turned out to be an epic failure that led to Jacksonville's 18th consecutive loss.

"It’s going to be a hard one to get out of my mind," said Meyer, who had no choice but to turn the page Monday with a Thursday night game at Cincinnati (2-1) up next.

The Jaguars (0-3) had just gouged Arizona on nine consecutive running plays. They led 19-17 late in the third quarter, having done just about everything right for much of the game.

Running back James Robinson was enjoying his best day of the season. Jacksonville’s defense was holding up against Kyler Murray and his uber-talented supporting crew. DJ Chark had made a spectacular touchdown catch. Jamal Agnew had tied an NFL record by returning a missed field goal 109 yards.

The Jaguars, at the very least, had found “the spark” Meyer talked about all week.

Then the game turned on a flicker — a botched flea-flicker.

Offensive coordinator Darrell Bevell dialed up the trick play on second-and-6 from the Jacksonville 25, a head-scratching call even before it unfolded in laughable fashion.

Rookie quarterback Trevor Lawrence and backup running back Carlos Hyde had a clunky exchange. Left guard Andrew Norwell intentionally spun in a move called the “whirly bird” and then whiffed trying to block three-time NFL Defensive Player of the Year J.J. Watt, who pressured Lawrence and forced him to check down and throw off his back foot.

Chark was streaking down the middle of the field. But Lawrence had no time and not enough space to deliver him the ball. Instead, he floated one to tight end Jacob Hollister in the flat. It ended up being an easy interception for cornerback Byron Murphy, who went untouched for a 29-yard score.

The Cardinals forced two more turnovers in the fourth quarter and won 31-19.

“I heard it come over the headset and obviously I didn’t stop it,” Meyer said. “You want creativity in the offense. I’m pushing every game, ‘Be aggressive. Be aggressive.’ It’s my job to say, ’If it’s not there, don’t do that.‴

He returned a missed field goal 109 yards for a touchdown on the final play of the first half Sunday, tying an NFL record, and took a kickoff 102 yards for a score last week against Denver.

He became the ninth player in NFL history with multiple 100-plus yard special teams returns in the same season and the 15th with two return touchdowns in the first three weeks of a season.

Josh Lambo has missed five kicks in three games, a recurring issue that caused Meyer to bring in two kickers for workouts Monday.

Lambo, who missed 12 games last season with a hip injury that required surgery, had two errant extra points Sunday. He is 0 for 3 on field goals this season, missing from 55, 52 and 48 yards. He was well wide twice last week against Denver, squandering six points in a 10-point loss.

Chark, playing in the final year of his contract, made a spectacular catch in the back of the end zone against the Cardinals. It was his second touchdown of the season and his third in his past four games.

Marvin Jones still appears to be Lawrence’s top option, but Chark is rounding back into form after being slowed in training camp by a broken finger on his right hand.

Jacksonville’s tight ends have been a huge disappointment.

Chris Manhertz doesn’t have a catch in two games after hauling in Lawrence’s first career TD pass in the opener. Rookie Luke Farrell, thrust into a bigger role after James O’Shaughnessy badly sprained an ankle last week, had a pass bounce off his hands. And Jacob Hollister’s bobble Sunday landed in a defender’s hands for an interception.

The Jags traded oft-injured cornerback CJ Henderson to Carolina on Monday for journeyman tight end Dan Arnold in hopes of helping the position.

LT Cam Robinson (shoulder) and Norwell (ankle) left Sunday’s game, but were able to return following sideline treatments. ... Tre Herndon (knee) was inactive, but is expected to practice during the short week.

379 — days since Jacksonville’s previous victory. The Jaguars opened the 2020 season with a home win against Indianapolis and have dropped every one since.

Jacksonville has little, if any, chance of ending its skid unless it reduces fumbles and interceptions. One of the youngest teams in the league, the Jags have an NFL-high nine turnovers in three games and rank last in turnover differential at minus-8.