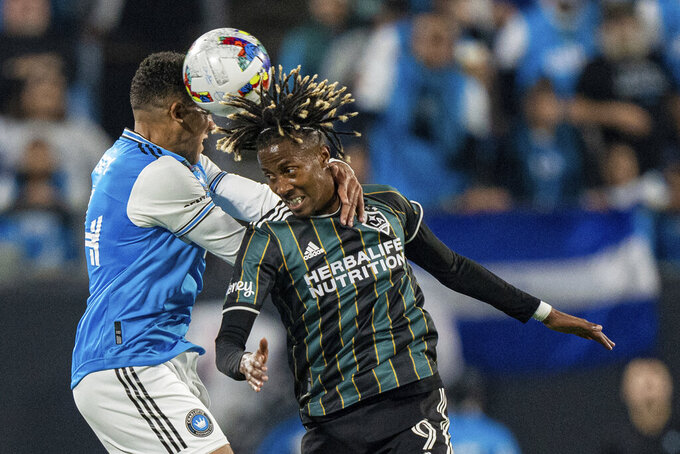 Fans dressed in the team's light, blue colors and wearing FC Charlotte scarves celebrated the team's first game at Bank of America Stadium, the home of the NFL's Carolina Panthers since 1996.

Things didn't go as well on the field for Charlotte FC, who fell as Galaxy substitute midfielder Efrain Alvarez struck a hard shot from outside the box into the upper right corner in the 77th minute.

Charlotte FC (0-2-0) had a chance to tie in the final minute of stoppage time, but Daniel Rios' header close to the goal off a cross from Alan Franco was stopped by LA Galaxy's Jonathan Bond.

The Galaxy have won both their games to start the season.

Still, the loss didn't dampen the crowd's enthusiasm as they stood and cheered at the end, much the way they did at the start.

“Welcome to the largest party Charlotte has known,” Charlotte FC and Carolina Panthers owner David Tepper said to the crowd moments before kickoff.

MLS Commissioner Dan Garber called it a historic night for the league. He said the crowd showed “there's no limit to where our league can go.”

LA Galaxy coach Greg Vanney had long thought North Carolina was hotbed for soccer and that showed in this contest.

"It's no surprise there was a fan base so ready and so eager to show support," Vanney said. “Our job was to come here and be the spoilers of the whole thing so I'm happy for that.”

Charlotte FC goalie Kristijan Kahlina said in recent years he had played games in front of 500 people in Bulgaria last year and as many as 14,000 in his native Croatia during his career. To see, “five times that, the support from our fans is unbelievable.”

People lined up at the entrances about four hours before the match kicked off, eager to cheer for their hometown MLS club.

Even the signature Panthers statues outside the stadium had Charlotte FC scarves draped around their necks for the occasion.

“We've waited for this for a while,” said Lenny Romero, a Charlotte fan who wore a curly wig of Charlotte FC blue.

People in Charlotte gear packed parking lots around the stadium that usually only get filled for Panthers' football.

Food carts and souvenir stands were everywhere with some fans even pulling out their Cornhole boards for football-style tailgates.

The final attendance topped the old MLS high of 73,019 at Mercedes-Benz Stadium when the Atlanta United played the Portland Timbers for the MLS Cup in December 2018.

Atlanta's building also had the previous top attendance for a regular-season match, 72,548 when the United played the LA Galaxy in August 2019.

Tepper's bid for an MLS franchise was approved in 2019 with plans to play in 2021. However, that was delayed a year due to the coronavirus pandemic.

The team made improvements of about $50 million or so to enhance the stadium for soccer. A new tunnel was added at midfield, along with soccer locker rooms, training facilities and a player lounge.

For several games, the stadium's upper level will be closed to fans. Still, it would give Charlotte FC a capacity of about 38,000.

Tepper was on the field about an hour before the start, waving and pumping his fist to cheering, grateful fans.

Charlotte FC defender Jaylin Lindsey grew up and played youth soccer in the city. He was excited to play as a professional in his hometown. “It’s going to be like a homecoming,” Lindsey said this week.

Fan Marshall Holin had followed the team's development since it was announced three years ago and made the six-hour drive from Kitty Hawk, North Carolina, to downtown Charlotte.

“There's a huge love of soccer in this region and just a culmination of all of that and a recognition it's something fun and great,” he said.

Officials told WBTV about 20 rows of a section of the upper deck were cleared after halftime as a precaution when a cellular antenna slipped from its mount. No one was hurt and the spectators were relocated.