Former Denver star Wolfe finally gets to play for Ravens 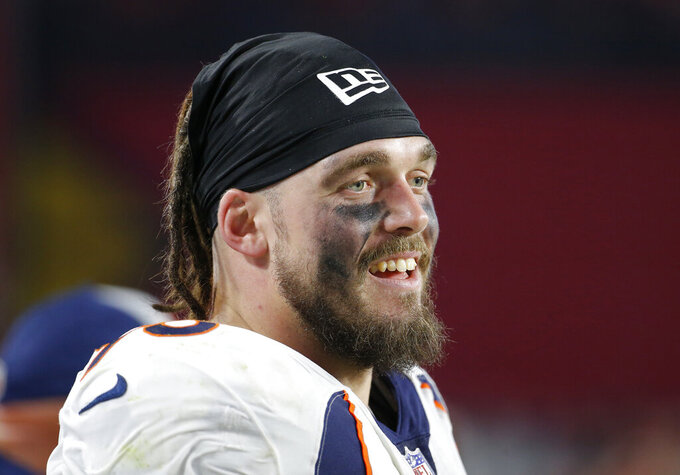 FILE - In this Oct. 18, 2018, file photo, Denver Broncos defensive end Derek Wolfe looks on during an NFL football game against the Arizona Cardinals in Glendale, Ariz. Wolfe figured he missed yet another chance to join the Baltimore Ravens when the team reached agreement last month on a three-year contract with free agent defensive lineman Michael Brockers. After the deal fell through, Wolfe immediately contacted his agent and insisted that he get in touch with the Ravens. Not long after that, the longtime tackle with the Broncos received a one-year pact with Baltimore.(AP Photo/Rick Scuteri, File)

After Baltimore's deal with Brockers fell through, Wolfe immediately told his agent to get in touch with the Ravens. Not long after that, the free agent tackle left the Denver Broncos to sign a one-year contract with Baltimore.

“I’m extremely happy," Wolfe said Friday in a teleconference. “Everything happens for a reason, man. When things aren’t supposed to happen, they do. I always thought I would fit into that (Ravens) organization really well. My whole career I thought that. I thought I was going to be drafted by them coming out in 2012. I’m really happy that I’m finally there."

Wolfe considered asking the Broncos to be dealt to Baltimore before last year's trade deadline, but backed off in an effort to show loyalty to the team that paid his salary for eight seasons. Although he had a career-high seven sacks in just 12 games in 2019, Wolfe figured his time in Denver was over.

“When a team doesn’t extend you during the season, it’s kind of a good sign that they’re ready to move on," he said. “My first choice was the Ravens."

He told his agent: “I really don’t care about the money right now. I just want to get on that team."

Baltimore went 14-2 last season, thanks mostly to a potent offense led by quarterback Lamar Jackson that ranked No. 1 in the NFL in points and yards rushing. The defense was solid, but during the offseason general manager Eric DeCosta was determined to improve a unit that allowed 4.4 yards per rush — worst in franchise history.

“When I saw Calais was going there, and I knew Brandon (Williams) was there already, it was a no-brainer for me," Wolfe said. “I think we can have the best defensive line in the league for sure. We can break records for (fewest) yards per rush. I think we’re going to be able to shut that run game down, and when it comes to our offense keeping us up by 10 or 20 points a game, it’s going to get ugly for these quarterbacks."

Wolfe's goal this season is to stay healthy (he's played all 16 games in only three seasons), play well and win a championship.

“I feel like if I can come in there and prove myself, they’ll extend me for a few years and I can be part of the organization," Wolfe said. “I would like to help bring a ring to the city."

Wolfe is excited to be part of a defense that long ago built a reputation for toughness. He learned about the tight-knit organization last season from quarterback Joe Flacco, who was traded from Baltimore to Denver in March 2019.

“I used to eat breakfast with Joe every morning," Wolfe said. “He told me it was one big family, and that’s what I want to be part of."

Wolfe visited the Ravens' training facility before the 2012 draft. He ended up being taken by Denver in the second round, and now, finally, the 6-foot-5, 285-pounder is part of Baltimore.

“I don’t really know that much about the city," Wolfe said, “other than they’re all about crab cakes and football."