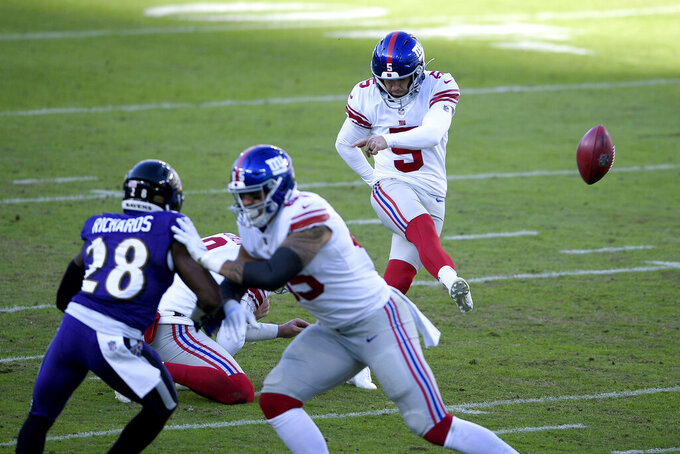 FILE - In this Dec. 27, 2020, file photo, New York Giants kicker Graham Gano (5) kicks a field goal against the Baltimore Ravens during the first half of an NFL football game in Baltimore. Gano had an outstanding year making 31 of 32 field goal attempts including his last 30. (AP Photo/Nick Wass, File)

EAST RUTHERFORD, N.J. (AP) — Graham Gano seems to do what he wants in training camp with the New York Giants.

The 34-year-old placekicker usually hangs around with punter Riley Dixon, snapper Casey Kreiter, fellow kicker Ryan Santoso and his coaches. Entering his 12th season in the NFL, Gano doesn't need anyone to tell him how to get ready for a season.

Kickers are like that. They are generally left to practice on their own, whether it's field goal attempts, kickoffs, squib kicks or whatever.

Unlike a year ago, Gano really doesn't have to start delivering until the Giants host the Denver Broncos in the season opener on Sept. 12.

Last year was a different story.

He was released by Carolina on July 30 after missing the previous season with a knee injury. It was kind of a no-brainer for the Panthers. Joey Slye was coming off a monster season and Gano was a question mark with the injury and his age.

Gano signed a one-year deal with New York on Aug. 19 and gave the Giants more than anyone expected. He hit 31 of 32 field goal attempts with his only miss from from 57 yards in the second week of the season. He ended the season setting a team record by making his final 30 field goal attempts.

His performance earned him a $14 million contract extension in November through the end of the 2023 season.

“I was just thankful for the opportunity last year,” Gano said Friday. “I had the knee surgery, I felt confident in my abilities, but I think the biggest thing I was just thankful to play the game again and that’s kind of how I feel. I think I’m just going to feel like that from here on out.”

Reminded it was about a year ago the Panthers let him go, Gano quipped he should have sent them a thank you note. He also said he was thankful for his 7 1/2 years in North Carolina. He left as the Panthers' second all-time leading scorer with 742 points.

Gano said his approach to kicking remains the same.

“I just take it kick by kick, honestly,” he said. “I try not to put any pressure on myself and just come out every day trying to get better. I think that’s the goal for all of us. We just want to get better every single day.”

NOTES: For the third time in less than a week, the Giants have seen a veteran retire. OL Zach Fulton told the team Friday he is leaving the game. LB Todd Davis and OL Joe Looney also retired. All three joined the Giants in the offseason. ... Coach Joe Judge said he gets daily updates on Saquon Barkley's rehab from a torn ACL injury. The running back remains on the physically unable to perform list. “When the medical team tells me a guy is good to go and to put him on the field, I know he’s good to go,” Judge said, adding there is no timetable for Barkley's return.