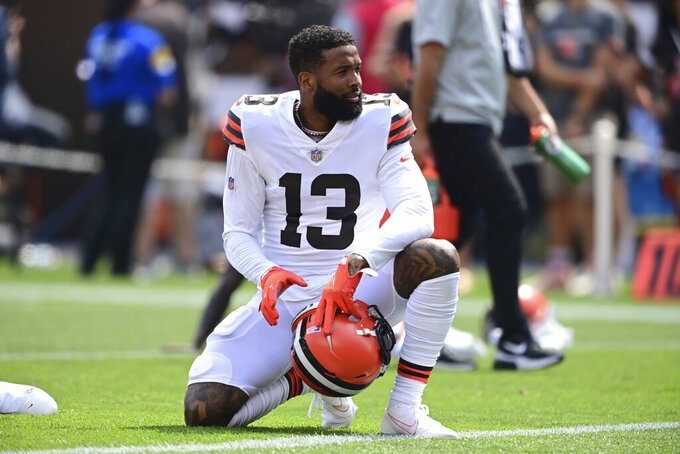 FILE - Cleveland Browns wide receiver Odell Beckham Jr. is shown before an NFL football game against the New York Giants, Sunday, Aug. 22, 2021, in Cleveland. Odell Beckham Jr. has been cleared for takeoff. The star Browns wide receiver made it full through a full week of practice without any issues with his reconstructed knee and coach Kevin Stefanski said Friday, Sept. 24, 2021, that Beckham will make his return Sunday against the Chicago Bears. (AP Photo/David Dermer, File)

The star Browns wide receiver made it full through a full week of practice without any issues with his reconstructed knee and coach Kevin Stefanski said Friday that Beckham will make his return Sunday against the Chicago Bears.

Beckham hasn't played since tearing his anterior cruciate ligament on Oct. 25 against Cincinnati, an injury that kept him out during the Browns' playoff run. He's been inactive for Cleveland's first two games.

The speedy receiver made a quicker-than-expected recovery following his November surgery and is set to make his season debut against the Bears (1-1).

Beckham was close to returning for the season opener at Kansas City, but decided to further delay his comeback after going through pregame warmups.

“Physically he looks good. He’s in good condition right now,” receivers coach Chad O’Shea said. “He’s been preparing off the field with his mental aspect of learning his assignments and doing those. We feel real good about where he is right now both physically and mentally.”

Beckham gives Browns quarterback Baker Mayfield a deep passing threat and another weapon for Stefanski to deploy. The timing of his return is also ideal after the Browns had to put steady receiver Jarvis Landry on injured reserve earlier this week with a sprained knee. He'll miss at least three games.

“We all know what kind of talent he has and what he brings to the field,” Garrett. “He looked at me Monday and said, ‘It’s time’ and I started rubbing my hands together. The world needs to see this, man.

"Now we got to see that chemistry out there that was missing last year. Those two (Beckham and Mayfield) can definitely be one of the best duos in the league. They're here to show it. It’s fun to see great players do their thing — not really against us. It’s fun to see players go out there and ball out and I have the privilege to see him on my team.”

Garrett laughed when asked if he hugged Beckham when he heard the good news.

The 28-year-old Beckham was coy about his return on Thursday, saying only “we'll see” when pressed about if he was going to face the Bears.

After being limited in recent weeks, he was cleared to be a full participant in practice Wednesday and Stefanski said Beckham took every rep the past three days. Stefanski did not say if Beckham will have a limited number of plays.

“Like with every player, I’m in constant communication with the player and their coach,” Stefanski said. "Those are things we talk about during the game, but he’s ready to go.”

Beckham, who came to Cleveland in a 2019 blockbuster trade from the New York Giants, had 23 catches for 319 yards and three touchdowns in seven games before he got hurt.

“He brings more fire to the offense,” Higgins said. "Been missing Odell since last year and you guys know what he’s able to bring — electric, he’s explosive. He can do it whenever he gets the ball in his hands and that’s what we’re missing.

“Can’t wait to see him Sunday.”

NOTES: Starting LT Jedrick Wills Jr. (ankle) and center JC Tretter (knee) are questionable but likely to play. ... Garrett acknowledged the Browns' defense needs to be better on third downs — opponents are 16 of 26 on conversions — and must improve across the board. However, he said it's too early to make broad judgments. “Only two games,” he said. “We need a larger sample size. ... There's not a fire yet.” ... Olympic gold medal pole vaulter Katie Nageotte spoke to the Browns after practice. She's from nearby Olmsted Falls, Ohio.