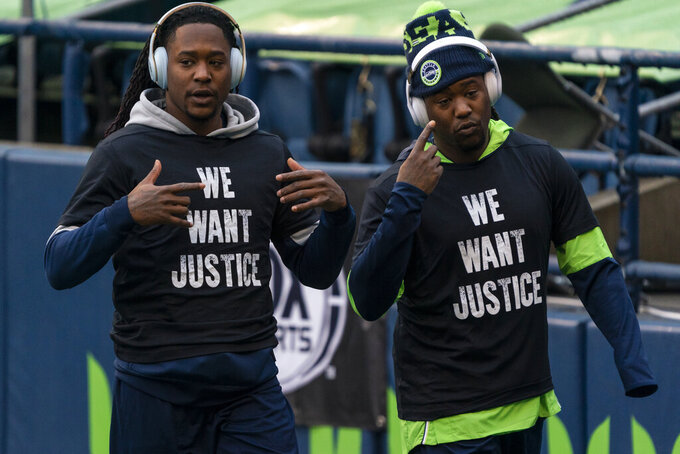 FILE - Seattle Seahawks cornerback Shaquill Griffin, left, and linebacker Shaquem Griffin are shown during warmups before an NFL football game against the Lost Angeles Rams in Seattle, in this Sunday, Dec. 27, 2020, file photo. The Griffin twins are already talking trash three months before they’re on opposite sidelines for the first time in their lives. Shaquill and Shaquem Griffin were teammates at every level of football growing up in St. Petersburg. They also played together at UCF and with the Seattle Seahawks the last three years. The seemingly inseparable brothers hit free agency in March and hoped to be reunited again. But it didn’t work out. (AP Photo/Stephen Brashear, File)

JACKSONVILLE, Fla. (AP) — The Griffin twins are already talking trash, and there’s still nearly three months to go before they’re on opposite sidelines for the first time in their lives.

Teammates at every level of football growing up in St. Petersburg, Shaquill and Shaquem Griffin also were together in college at UCF and with the Seattle Seahawks the last three years. The seemingly inseparable brothers hit free agency in March and hoped to be reunited again. It didn’t work out.

Instead, they both landed back in the Sunshine State and on each other’s schedule, set to meet Oct. 17 (Week 6) in London when the Jacksonville Jaguars host the Miami Dolphins. Even with 350 miles currently separating them and 11 weeks until their matchup overseas, they’re trying to get in each other’s head.

“I’m already talking trash,” Shaquill said. “I don’t care. I told him make sure you have your passport ready because I need you to make sure you make it. I need no excuse. I told him I might walk up while he’s at warm-ups and push him down. So yeah, I already started my trash talk and I’m not changing.

“I heard it before I actually got here,” said Shaquem, who signed with the Dolphins last week. “I just didn’t know he was (talking to) the media first. So I guess he had the upper hand, but there’s a lot of trash talking going back and forth.

“Before practice, after practice, a little before meetings, during our break, lunch break, dinner. We’re going back and forth. I guess it’s kind of like a little rivalry me and my brother got. It started when we were kids, see who could eat the most or walk the furthest. I guess it’s a new rivalry going on. I’m loving it.”

Shaquem plans to keep it going right up until kickoff at Tottenham Hotspur Stadium.

“I told him we could get a good arm wrestle on the 50-yard line,” Shaquem said. “He’s scared. It’s OK. Everybody knows he’s kind of scared. I’m kind of the stronger one -- and the faster one. But don’t tell nobody. But we’re going to keep it going.”

The Griffin brothers were one of the league’s feel-good stories the last three seasons. Seattle drafted Shaquill, who left UCF following his junior year, in the third round in 2017. Coach Pete Carroll added Shaquem a year later, selecting the one-handed linebacker in the fifth round.

That 2017 season was the first time they had been apart since birth. This will be their second in different cities.

Their pending on-field matchup across the pond will be even more rare. When was the last time they played against each other?

“Never. Never, besides one on one in the backyard or racing somewhere in the street,” Shaquill said.

Shaquill signed a three-year, $40 million contract in free agency to be one of Jacksonville’s starting cornerbacks. He initially hoped Shaquem would join him with the Jaguars, but an offer never materialized.

Shaquem ended up in Miami after three years playing mostly on special teams in Seattle. It’s the latest chapter in an inspirational story about overcoming adversity. Shaquem was 4 years old when doctors amputated his left hand a day after his mother found him in the kitchen attempting to cut off his jelly-like fingers, which were in scorching pain whenever he touched anything. He suffered from amniotic band syndrome, a congenital birth defect.

Despite having just one hand, he kept up with his twin brother on and off the field.

“I’m not going to lie. When I got the phone call, it was like being drafted all over again,” Shaquem said. “I had to put the coach on mute. I started screaming in the house and when I calmed back down, I had a good conversation with coach. I mean, the opportunity is amazing and I’m just glad they gave me a shot.”

And it came with a bonus: A chance to play against his brother for the first time.

“First time the Griffin twins going against each other, so y’all make sure you blow that story up because it’s on and popping when I see him,” Shaquill said.