Injuries and rehabs have Giants at less than 100% for season 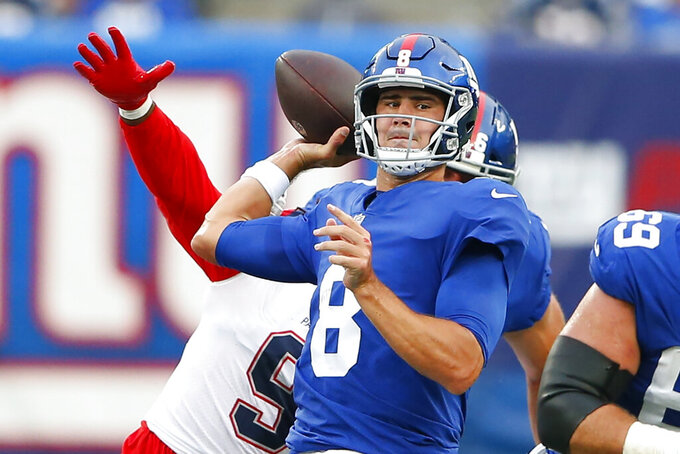 EAST RUTHERFORD, N.J. (AP) — The New York Giants used free agency and the draft to fill holes in the lineup and to give Joe Judge a better chance in his second season as coach.

They gobbled up playmaking receiver Kenny Golladay, veteran tight end Kyle Rudolph and cornerback Adoree Jackson on the open market in March. The draft added speedy receiver Kadarius Toney in the first round. Everything was in place for New York to come off a 6-10 season and reach the playoff for the first time since 2016.

With the preseason over and the season opener against the Denver Broncos not far away, the Giants may have more holes to fill than at the start of training camp. Injuries and longer than expected rehabilitations seemingly have left the Giants short-handed for the opening kickoff.

The list of question marks is long and impressive.

Coming off reconstructive ACL surgery on his right knee, star running back Saquon Barkley has not practiced at 100% and has had no contact. He won't play if he doesn't.

Left guard Shane Lemieux has been slowed by a knee injury since early in camp and tight end Evan Engram (calf) and receiver Darius Slayton (ankle/foot) were hurt in the preseason finale against New England.

Golladay, Barkley, Rudolph, Slayton and Lemieux worked with the team after the final cuts, but it was not at full speed. Elerson was placed on injured reserve and Robinson remains on the physically unable to perform list.

In possibly a make-or-break third season, quarterback Daniel Jones seemingly is going to have less help than last year. The positive is coordinator Pat Graham's defense might be able to carry the team for a while with defensive lineman Leonard Williams back after signing a long-term deal coming off a breakthrough season.

All Judge can do for now is get his healthy players ready.

“One thing to focus on going into the season is you’re never a finished product Week 1,” he said. "You need to understand that, keep building, keep improving week to week from how you operate in September to keep improving as a team, and build towards those long stretches of the season. We’re going to coach whoever is available and it’s our job to have the entire team ready and the entire team progressing, and that’s what we’re going to focus on.”

The biggest concern is the same as last season. The offensive line was shaky in 2020 and its performance against the Patriots last week was poor. It gained 34 yards on 12 rushes, allowed two sacks and three quarterback hits.

Left tackle Andrew Thomas, the first-round pick last year, had a horrible game, whiffing on two pass rushes. Lemieux didn't play. Nick Gates is a solid anchor in the middle. The right side is a question mark. Will Hernandez is making the move to right guard after losing his spot on the other side to Lemieux following a bout with COVID-19. Right tackle will be played by either veteran Nate Solder or second-year pro Matt Peart.

If the group struggles again, it won't make a difference who gets healthy among the skill players.

Defensive coordinator Pat Graham is going to become a head coach if his unit has another year like last.

Graham took over a defense ranked 30th in 2019 and turned it into the NFL's ninth best. With the exception of Tomlinson, the group is returning and has a better understanding of the schemes.

The preseason showed the run defense needs some work. Veteran Danny Shelton is replacing Tomlinson in the middle of the 3-4 front.

Williams was a beast last season, getting 11 1/2 sacks. LB Blake Martinez continues to tackle everything in reach and James Bradberry is one of the league's top cornerbacks.

The smartest move the Giants made in recent years was signing placekicker Graham Gano last August after he was let go by Carolina. The guy is automatic.

The 34-year-old hit 31 of 32 field goals, with his only miss from from 57 yards in the second week of the season. He ended the season setting a team record by making his final 30 attempts.

Gano has kicked so well the Giants could afford to trade Ryan Santoso to Carolina last week for a draft pick.

While Bradberry earned Pro Bowl honors in his first season with New York, teams constantly targeted the guys on right side, whether it was Isaac Yiadom, Corey Ballentine, Ryan Lewis or Darnay Holmes.

Jackson is supposed to raise the coverage level on the right side. The concern is he only played in three games last season and the Titans let the former first-round pick go in a cap move. We'll see.

Despite all the concerns, the saving grace is the Giants play in the NFC East, the NFL's worst division. Washington won the division with a 7-9 record, and the Giants finished second, only a game behind despite a 1-7 start. Dallas also was 6-10 and Philadelphia 4-11-1. Anyone can win this division.