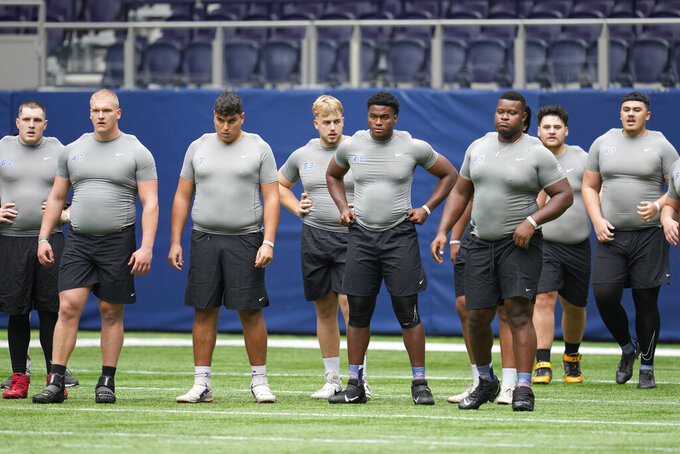 Offensive lineman Jason Godrick, of Nigeria, center, takes part in the NFL International Combine at the Tottenham Hotspur Stadium in London, Tuesday, Oct. 4, 2022. International athletes on Tuesday are taking part in a series of tests in front of NFL evaluators for a potential position in the NFL's International Player Pathway programme. (AP Photo/Kin Cheung)

LONDON (AP) — Jason Godrick plans to “dominate” as an NFL offensive lineman. The first hurdle seems like a big one, though.

“I've never played an organized game of football before,” the 6-foot-5, 293-pound Nigerian said. “I've been blessed to be a quick learner, a very good student.”

The 21-year-old Lagos native, who goes by “Chu,” was one of the more than 40 prospects — representing 13 countries — who competed in the NFL's international combine Tuesday at Tottenham Hotspur Stadium.

They're hoping to join the league's International Player Pathway program.

Godrick switched from basketball to football in January — coaches were impressed by his hoops “mixtape” — and a few months later he saw countryman Roy Mbaeteka sign with the New York Giants despite having not played in high school or college.

“Roy is a big inspiration for us back home,” Godrick said of the 6-9, 320-pound offensive tackle. “It was very big in Nigeria when he got signed.”

Mbaeteka, who was released from the Giants practice squad last week, had participated in last year's combine in London and earned an invitation to the Pathway program, whose most notable alum is Philadelphia Eagles offensive lineman Jordan Mailata of Australia.

Godrick, like several other Nigerian prospects on Tuesday, came through a program run by former Giants defensive end Osi Umenyiora.

The two-time Super Bowl winner was on hand at Tottenham's stadium, where his former team plays the Green Bay Packers on Sunday.

“They have the athletic ability, they have the size, a lot of them have the speed. All they need is just the technique refinement,” said the British-born Umenyiora, who spent part of his childhood in Nigeria.

A handful of the prospects at the combine have some U.S. college exposure, but many have played only in European leagues or universities — or not at all. Some are in their mid-20s. Many work regular jobs.

Emmanuel Falola, an inside linebacker with the Bristol Aztecs, is an accountant. The East London native took the day off for the combine.

“I haven't been taking time off to prepare though — I've been working and preparing,” said the 24-year-old Falola, who also tried out last year.

Those selected for the Pathway program will begin training in the U.S. in January and could join rookies in minicamps in May.

“We don’t have that much time, especially the guys that come from other sports,” said Will Bryce, head of football development for NFL International. “Their bodies have to change. They’re used to playing rugby or soccer — you’re running a lot more, whereas in football it’s repeated sprints, different positions.”

Like last year, there were no quarterbacks, punters or kickers at the combine. The NFL listed eight Nigerian participants — the largest contingent among the countries, which included Australia, New Zealand, Japan, Panama, Mexico and several in Europe.

NFL coaches, scouts and general managers flock to Indianapolis each winter for the league’s annual scouting combine. There, pro prospects test their skills in various elements such as the bench press, 40-yard dash and vertical jump.

In London on Tuesday, it was the NFL conducting the evaluations as prospects were put through tests such as the broad jump, various sprints and the shuttle drill, which records lateral quickness.

Godrick has been applying some tips he picked up from Cameroon-born Roman Oben, a former offensive tackle who is now NFL vice president of football development.

“I’ve been watching film and with his guidance, I can say my growth has been good,” said Godrick, who plans to continue training back home in Nigeria, where he recently earned a college degree in human anatomy.