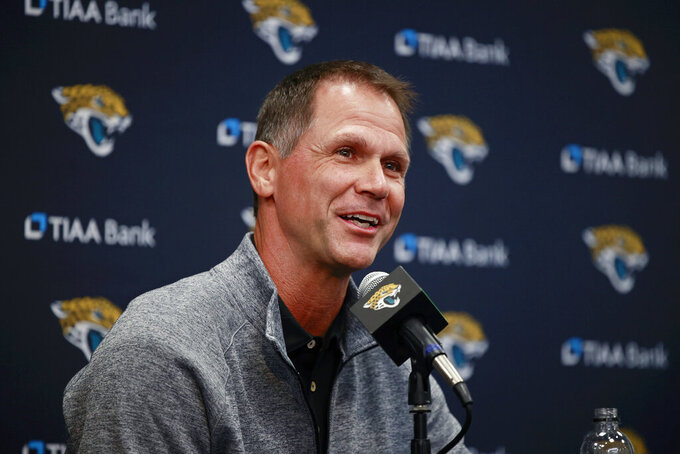 Jacksonville Jaguars General Manager Trent Baalke answers questions from the media during a press conference Friday, April 29, 2022 at TIAA Bank Field in Jacksonville, Fla. Travon Walker, a defensive lineman from the University of Georgia, was the overall No. 1 pick for the Jacksonville Jaguars in the 2022 NFL Draft. (Corey Perrine/The Florida Times-Union via AP)

JACKSONVILLE, Fla. (AP) — Trevor Lawrence doesn’t appear to have a true No. 1 receiver in Jacksonville.

The Jaguars ended up doing little, if anything, to upgrade Lawrence’s receiving corps in the NFL draft. No receivers. No tight ends. Not even a third-down back.

General manager Trent Baalke and new head coach Doug Pederson selected plug-and-play center Luke Fortner from Kentucky with the first pick in the third round (No. 65 overall) Friday night and added short-yardage and goal-line running back Snoop Conner from Mississippi in the fifth round (No. 154) Saturday.

They used five of their seven picks on the defensive side of the ball, most notably by drafting Georgia pass rusher Travon Walker with the overall top pick and moving up to add versatile Utah linebacker Devin Lloyd at No. 27.

They also drafted Wyoming linebacker Chad Muma (No. 70) in the third, Ouachita Baptist cornerback Gregory Junior (No. 197) in the sixth and Arkansas cornerback Montaric “Buster” Brown (No. 222) to open the seventh.

Landing more help for Lawrence, though, will probably have to wait. While many thought adding pieces around last year’s No. 1 overall pick should be the priority for a team with no identity and a new coaching staff, Jacksonville’s board fell differently.

“We’re not done,” Baalke said, adding that the team still plans to add undrafted free agents and will keep an eye on veterans who might become available.

The Jaguars did spend big in free agency to build around Lawrence. They signed Kirk to a four-year, $72 million contract, signed Zay Jones to a three-year, $24 million deal and landed tight end Evan Engram on a one-year, $9 million contract.

But they’ll go into the season with Engram and fellow tight ends Dan Arnold and Chris Manhertz in the final year of their deals. Same for Jones and Laquon Treadwell.

One thing to consider, though: Jacksonville is counting on dynamic running back Travis Etienne, the 25th overall pick in 2020, to be a factor after missing all of last season following a Lisfranc injury to his left foot.

“Overall, I feel great,” Pederson said. “We addressed a lot of issues early with free agents and now we picked it up in the draft. ... I like this team.”

Collaboration was the word of the weekend, maybe even the last few months, for the Jaguars.

Baalke and Pederson insisted they were in lock step on every pick, and owner Shad Khan reiterated that the communication and cooperation between his front office and coaching staff have been the most pleasant part of his franchise’s latest rebuild.

“Let’s be honest with ourselves. Our record has not been good drafting, especially in the early rounds, and how do we get better?” said Khan, who pointed to years when Jacksonville’s draft board was so secret he wasn’t allowed to see it before the draft began. “And really the answer is basically two words: collaboration and transparency. So this has been a very intensive process with really the coaches, with the scouts viewing film together, a very grueling process where there’s integrity in the evaluation. …

“Obviously, time will tell, but definitely you can’t be doing the same thing over again and expecting different results. We are doing something very different, and it started from Day One. I can tell you, I feel fabulous, and I think we’ve had a really great last couple of days I think as an organization.”

Lloyd made one of the most impressive picks of the draft. He lifted NFL Commissioner Roger Goodell off the ground while hugging him on the stage in Las Vegas on Thursday night.

His mom was behind the move.

“I just told Devin to make sure he picked up Roger Goodell off the floor,” Ronyta Lloyd said Saturday. “I didn’t know he was going to pick him up like that. I just wanted to see if he could.”

Pederson had to tell assistant coaches, scouts and even Baalke how to pronounce Ouachita (waa-shee-tuh).

“We’re very confident he’s going to come in here and compete,” Baalke said. “He showed at the Senior Bowl he’s capable of making those steps. We’ll let him come in and go to work.”